Dear God Do Not Leave America Alone with Ted Cruz 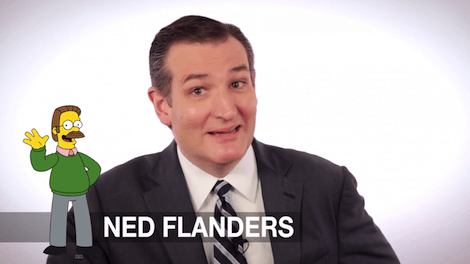 Apparently 27.6 percent of Iowa Republican caucus goers — 51,666 people — think Senator Ted Cruz of Texas should be President of the United States. That made him the biggest winner coming out of Iowa, heading into the crucial New Hampshire primary.

Heaven help us if Ted Cruz becomes President. I’m not referring to his policy views, although I find those extreme and disturbing. I’m not even referring, really, to his aggressive embrace of a no-compromise approach to politics, which has alienated him from nearly every United States Senator, Republican and Democrat.

I’m focused on something else. There is so much evidence, mounting every day, that Ted Cruz, the person, is insufferable. Absolutely unbearable to be around. Four years of it could cause many Americans, including valuable contributors to our nation, to flee for the border. And for all we know, Cruz will use the wall he’s pledged to build to keep people in.

Here’s some of what we know so far:

Claiming victory on the night of the Iowa caucuses, after runner-up Donald Trump gave a short and remarkably gracious speech, Cruz took the stage and launched into a pious monologue that seemed to go on forever. It lasted so long that across town Hillary Clinton, as much as she must have wanted to be polite to Cruz, finally took to the microphone herself to claim victory. CNN and MSNBC, perhaps sweating that Cruz was sending their ratings down, switched to Clinton. When Clinton finished speaking, those networks went to commercial, and if you switched to Fox News at that point, Cruz was still talking, and talking.

“Weeping may endure for a night, but Joy cometh in the morning,” Cruz intoned, leading one “Daily Show” staffer to tweet, “Morning is coming…so wrap it up @tedcruz. I have to work tomorrow.” Former George W. Bush White House spokeswoman Dana Perino remarked:

We already knew Cruz knew how to talk, since most people first heard of him when he conducted a near-record 21-hour filibuster on the Senate floor attacking Obamacare, with the highlights being a cutesy adaptation of “Green Eggs and Ham” and an impression (see below) of Darth Vader.

But the roots of Cruz’s insufferableness go way back.

A recently-unearthed video shows that 18-year-old Ted Cruz was already super-annoying. Asked about his ambitions, the 80’s-era Houston high school student first says he wants to “be in a teen tit film like that guy who played Horatio” in “Malibu Bikini Beach Shop.” Then he gets serious: “Well, other than that, take over the world, world domination, you know, rule everything. Rich, powerful, that sort of stuff.”

OK, maybe all of us were embarrassing at 18.  But most people turn to face themselves at some point, and catch a glimpse of how the others must see the, um, faker, as someone once said.  Ted Cruz, not so much.

Cruz’s freshman year roommate at Princeton, Craig Mazin, now a Hollywood screenwriter, had this to say about Cruz:

Ted Cruz is a nightmare of a human being. I have plenty of problems with his politics, but truthfully his personality is so awful that 99 percent of why I hate him is just his personality. If he agreed with me on every issue, I would hate him only one percent less.

Mazin later commented to The Daily Beast, regarding Cruz’s habit of walking in his bathrobe to the women’s part of the Princeton dorm: “I would end up fielding the [girls’] complaints: ‘Could you please keep your roommate out of our hallway?'”

Mazin added, “I would rather have anybody else be the president of the United States. Anyone. I would rather pick somebody from the phone book.”

Cruz’s Senate colleague Lindsey Graham this month echoed that remark precisely: “Let’s just pick somebody out of the phone book if we have to.” If you could find a phone book these days, you would see it has a lot of names in it, presumably people with a wide range of skill and energy levels. People who’ve spent time with Ted Cruz apparently would rather roll the dice on any of them than go with Cruz.

At Harvard Law School, according to an article in GQ, Cruz generally refused to study with graduates of colleges other than Harvard, Yale, or Princeton. A former roommate told the magazine that Cruz “said he didn’t want anybody from ’minor Ivies’ like Penn or Brown.”

Fellow law student Melissa Hart told the Boston Globe that when she gave Cruz a ride from New York back up to Cambridge,“We hadn’t left Manhattan before he asked my IQ. When I told him I didn’t know, he asked, ‘Well, what’s your SAT score? That’s closely coordinated with your IQ.’ ”

Cruz made his first big move in politics as a 29-year-old lawyer helping George W. Bush with the 2000 Florida recount fight.  According to the New York Times, Cruz gained a reputation for sharing:

If anyone was unaware of his résumé, Mr. Cruz was vigilant about correcting that…. Emails from Mr. Cruz arrived at all hours, co-workers said, providing updates on his recent feats. At least a few colleagues occasionally avoided meetings that included Mr. Cruz, to spare themselves the pontification, according to a top Bush adviser.

“Ted thought he was an expert on everything… He was a smart and talented guy, but completely taken with himself and his own ideas. He would offer up opinions on everything, even matters outside his portfolio. He was a policy guy, but he would push his ideas on campaign strategy. He would send memos on everything to everyone. He would come to meetings where he wasn’t invited—and wasn’t wanted.” In fact, this Bush alum recalls, “the quickest way for a meeting to end would be for Ted to come in. People would want out of that meeting. People wouldn’t go to a meeting if they knew he would be there.”

There’s a person like this in most workplaces.  We may try to be nice to them, maybe help them out. But we don’t make them President of the United States.

Now we get to another aspect of the terminally insufferable. Ted Cruz is a big fan of comedy, and he loves hearing his own impressions of his favorite characters.

I don’t think Buzzfeed had to twist Cruz’s arm to make a video where he minces his way through impressions of characters from “The Simpsons.” Cruz’s Ned Flanders is decent, but you might notice that the “Simpsons” voices that Cruz tries to do after that also sound like Ned Flanders. That’s because Cruz sounds like Ned Flanders anyway.

Although Cruz has famously attacked Donald Trump’s supposed “New York values” on the stump, he’s a big, big fan of “Saturday Night Live,” which, I believe, is performed live from New York.  After Trump was invited to host SNL, Cruz told CNN that he would consider appearing on the show but “I don’t think I’ve been invited.” Appearing on Bloomberg TV, Cruz suggested how much he wanted to be asked: “I grew up as a Saturday Night Live junkie, so I love watching. I’d be thrilled to do it. I would love to.” He also volunteered that he’s a huge fan of (New York native) Eddie Murphy, and he added, “The problem is I can actually do quite a few of those riffs, but none of them are appropriate in the world of politics.”

Yes, that’s the problem. Because otherwise we would all love to hear Ted Cruz riff on Buckwheat, Mr. Robinson, Ramon with herpes simplex 10, and Nengue Mboko from Cameroon. Although some of those might sound like Ned Flanders.

I think if I had to sit through Cruz’s impressions every night, I might leave the dinner table, walk outside, find a patch of grass, sit down and put my head in my hands.

Cruz’s wife said this week on the stump that when Cruz is stressed, “He’ll call me and just sing me a Broadway tune.”  She marveled that her husband “never ceases to defuse a stressful moment with a moment of levity.” But Mrs. Cruz expressed a bit of dismay at her work for the campaign getting interrupted by the bellowing Senator: “I’m thinking, ‘I’m on a finance call right now. Do you really need to be doing this?'”

The thing is, if we elect Ted Cruz president, it could be a very, very long drive home.