What Law Students — and Everyone — Should Know About For-Profit Colleges

posted at 1:14 pm by David Halperin 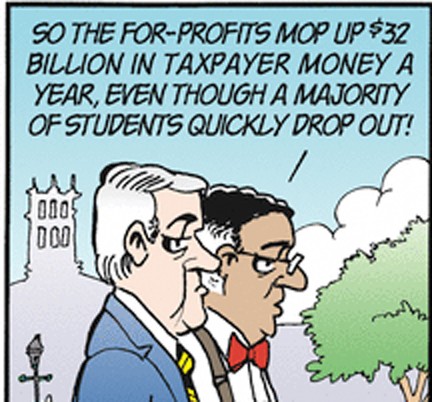 This article originally appeared in the Harvard Law Record, a student-run publication. It also appears on Huffington Post.

I’m a Washington DC lawyer and policy advocate, and I spend a couple days a week trying to expose and end the abuses of a particularly bad industry: predatory for-profit colleges. I am regularly contacted by industry employees who no longer can live with being part of an immoral enterprise:

• The marketer at a Utah “lead generation” company who is assigned to placing fake ads for non-existent jobs on the Internet, aimed at luring unemployed people to provide their contact information.
• The telephone rep at a Florida call center, who grabs the leads that were generated, and tries to deceive these people – low-income single parents, veterans, and others struggling to get ahead – into buying high-priced, low-quality career training programs, many conducted entirely online.
• The California college librarian, heartbroken because her school has admitted to its $80,000 criminal justice a program a mentally challenged man who reads on a third grade level and believes he is training to become a police officer.

These employees talk to me about feeling ashamed, degraded, disgusted with what they’re doing.

Yet their ultimate bosses, the CEOs of the big predatory for-profit colleges, seem to have no such shame. Nor do the many power brokers and celebrities, from Suze Orman to Colin Powell, Trent Lott to Dick Gephardt, Marc Morial to Mitt Romney, who have been hired, one way or another, to endorse and defend bad actors in this industry. Nor do the many graduates of Harvard Law and other premier institutions who get rich as executives and advisers with predatory for-profit colleges.

When graduates leave law school, they have a world of opportunity. The question posed for you by the story of for-profit colleges is whether you want to be paid to shield the privileged even when they engage in blatant abuses, or whether you want to use your talents and creativity to help build a stronger, more just, more innovative, and more productive society that benefits everyone.

A for-profit college is a college that’s owned by a profit-making business, as opposed to the more traditional model of a college operated by a state or as a non-profit. Most for-profit colleges focus on training students for careers, in fields from information technology to health care to auto repair. There’s a strong need for such training programs, and there’s nothing wrong in theory with the idea of having businesses run them, but in practice it has created a big problem for students and taxpayers.

Many for-profit colleges get about 90 percent of their revenue from federal government grants and loans provided to help students get an education. These businesses hire lobbyists to loosen the government’s rules for getting such aid. They also spend heavily on campaign contributions that have helped buy the allegiance of almost all the Republicans in Congress, and many of the Democrats as well.

As a result, the rules are very weak, and for-profit colleges can maximize their profits by ripping off students – using deceptive advertising and coercive recruiting, charging very high prices, and spending far too little on teaching and helping students build careers. The victims of these abuses have seen their financial futures ruined by overwhelming student loan debts reaching over $100,000 in some cases.

Some for-profit colleges are honest and do a good job educating students, and there are good teachers and students at even some of the worst schools. But overall, the industry is hurting people and our economy, while making a small group of owners rich enough to buy their own yachts, private planes, and mega-mansions. For-profit colleges have obtained as much as $32 billion a year from federal aid, and their lobbyists work every day to keep that money flowing.

For-profit colleges tend to have graduation and job placement rates at the low end of the scale, especially given their high prices. Here is one key statistic that shows the poor performance overall of for-profits: According to the U.S. Department of Education, for-profit colleges now have about 13 percent of all US college students, but they account for nearly half of all defaults on student loans. The Department also found that 72 percent of the for-profit colleges it surveyed produced graduates who on average earned less than high school dropouts.

There are real challenges in figuring out how to provide quality career education to people at affordable prices. But instead of focusing on that important work, Washington education policy advocates and lawyers are caught up in a debate defined by the for-profit college industry using pressure to keep billions in federal dollars flowing with no accountability whatsoever. Because their wealth comes almost entirely from taxpayers, the for-profit college industry is a monster that Washington has created. It’s difficult to stop this monster.

These law enforcement probes, coupled with an increasing volume of media exposes, have finally helped get the message to potential students that they might do better at a community or state college. But the for-profits continue to run deceptive ads endlessly on TV and the Internet; before he was killed in Ferguson, MO, Michael Brown had enrolled at for-profit Vatterott College, a school that has been punished in court for deceiving its students and leaving them worse than they started and whose executives received criminal convictions for defrauding the government.

President Obama is well aware of the scam. His Administration has sought to implement a new rule (called “gainful employment”) to channel aid toward programs that were actually helping students and away from programs that consistently leave students with overwhelming debt. But an army of industry lobbyists and lawyers have managed to water down the rule and then have it struck down in court, on the ground that the Department had failed to articulate a clear rationale for one component of the regulation.

Right now, APSCU, a trade association dominated by predatory for-profit colleges, is back in court trying to block a new version of this rule. I work with a coalition of student, veterans, labor, consumer, and civil rights groups urging the court to decide that the government has the right to demand at least minimal performance standards, that predatory companies do not have a permanent entitlement to take billions in taxpayer dollars without regard for the consequences for students and our economy. (This litigation, and many other aspects of this issue, are ripe for further exploration through your law school papers and law journal articles.)

When you consider a debate like this, think about your future as an attorney. Which side will you be on?