posted at 5:08 pm by David Halperin 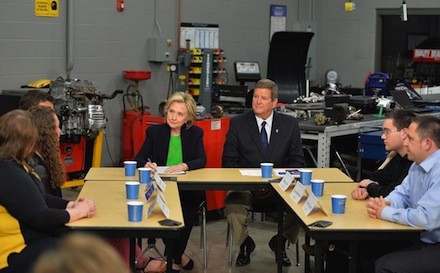 Some of the for-profit schools, some of the scandals that have arisen in these places where they take all this money and put all these young people and their families into debt. Even if they graduate they don’t have credentials that are going to get them those jobs. Or they can’t graduate because the other costs are just too great and they can’t continue to incur debt, so they drop out, but they still have the debt, but they don’t have the degree or the credential. So we have to sort this out, and we have to take on those interests that want to keep the system the way it is because it generates a lot of money and a lot of interest payments for them, and instead get back to basics….

Although cynics might see today’s Hillary Clinton as a somewhat opportunistic #HillarizabethWarren, this in fact isn’t the first time that Clinton has called out the for-profit college industry for its abuses. Last fall, speaking in Las Vegas, Clinton attacked “fly-by-night for-profit schools” and predatory lenders that “exploit students.” Clinton joined a number of office-seekers who recently have criticized abusive practices in this industry. (President Bill Clinton remains the Honorary Chancellor of Laureate International Universities, part of the Laureate for-profit college chain.)

Hillary Clinton’s position stands in stark contrast to that of GOP heavyweight Jeb Bush, who last year appeared before the for-profit college trade group APSCU to embrace the industry and denounce efforts to hold predatory schools accountable for waste, fraud, and abuse with taxpayer dollars.

A very good start for Secretary Clinton in addressing a serious abuse that harms the middle class and low-income people, single parents, returning veterans, immigrants, and others striving to build a better future.

[UPDATE 4-24-15: Bill Clinton today ended his role as honorary chancellor of Laureate International Universities, a position he has held since 2010.  Bloomberg reports:

His departure has nothing to do with the campaign, the company and the former president’s office said, telling Bloomberg that he had agreed to a five-year term in the position.

“Laureate students represent the next generation of leadership. I have seen a commitment to quality and leadership throughout the Laureate network, and I have enjoyed being a part of it,” Clinton said in a statement announcing his departure.

The Republican Party had labelled Hillary Clinton’s remarks on for-profit colleges “hypocrisy” in light of Bill Clinton’s role with Laureate. ]