posted at 1:20 pm by David Halperin 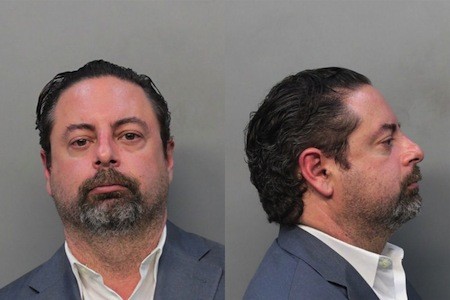 On Tuesday, a federal jury in Miami convicted Alejandro Amor, the owner of shut-down FastTrain College, of theft and conspiracy. Amor gained notoriety when it was disclosed that FastTrain, a for-profit college, used strippers to recruit students, but the offense for which he now faces a long prison sentence was enrolling, and cashing federal financial aid checks for, some 1,300 students who were ineligible because they lacked a high school degree. Before FastTrain was shut down by an FBI raid in 2012, it received, over five years, about $35 million in federal taxpayer-funded Pell grants and student loans. Federal prosecutors have acted to seize Amor’s house, yacht, private plane, and Jaguar.

Two weeks before Amor was convicted, another Miami for-profit college owner, Ernesto Perez of Dade Medical College, pled guilty in state court to illegally bundling $159,000 in campaign contributions to a range of politicians; Perez (pictured above) had in the past made clear that currying favor with office-holders was important in his business, where colleges often get 90 percent of their revenue from government funds. Perez faces two months of house arrest, plus three years on probation. He also will pay the government $150,000 for the cost of the investigation and donate $50,000 to charities.

Perez’s guilty plea also resolved pending charges that he committed perjury by failing to disclose, when nominated by Florida’s governor to serve on the state board overseeing for-profit colleges (!), his prior conviction and jail term for battery and exposing himself to a 15-year-old girl. Prosecutors are still investigating Perez regarding possible student loan crimes at Dade Medical College, which shut down suddenly on October 30, leaving students out in the heat. The school was getting as much as $33 million a year in federal student aid.

Two Miami strip-mall college owners, facing confinement, and their schools shut down. Based on the facts disclosed, they deserve everything coming to them, and more, for selling students big dreams, offering high-priced, low-quality programs, and deceiving government overseers.

But contrast the outcomes Amor and Perez face with the treatment of Pittsburgh-based Education Management Corporation (EDMC), for many years the second largest for-profit college company. EDMC, which operates the Art Institutes, Argosy University, Brown Mackie College, and South University, was getting as much as $1.8 billion a year from taxpayers. The U.S. Justice Department had joined a False Claims Act whistleblower lawsuit alleging that for over a decade EDMC had violated the federal law prohibiting for-profit colleges from paying sales commissions to their recruiters, resulting in ill-gotten gains from the government of some $11 billion. More than a dozen state attorneys general also had been pursuing a joint investigation of EDMC regarding alleged misconduct in recruiting and provision of student loans.

EDMC managed to settle all of these charges and potentially much more last week on terms remarkably favorable to the company. EDMC admitted no wrongdoing at all; indeed, its CEO stated that the government claims were “without merit.” The company agreed to pay $95 million to resolve the whistleblower case, and, to settle the AG investigations, to forgive about about $103 million in loans that it made directly to some 80,000 of its own former students nationwide.  But that forgiveness amounts to only $13o0 per student, some of whom owe upwards of $100,000 in federal and private loans, and the forgiven debt was basically junk loans that EDMC likely never expected to get repaid anyway.

Meanwhile, EDMC continues to operate — 110 campuses in 32 states and Canada, as well as online.  And it continues every day to enroll new students and cash their federal aid checks — last year EDMC got $335 million in Pell Grants and $650 million in federal student loans. In announcing the settlement, Attorney General Loretta Lynch called the $95 fine “unprecedented” and said the amount could not have been larger because of EDMC’s financial situation. Student enrollment, and EDMC’s share price, have indeed plummeted due to mismanagement and public disclosures of abuses, and the company is now controlled by its creditors, including private equity firm KKR. But the now-penny stock has more than doubled in value since the settlement was announced.

It’s unclear from the agreements, but it is possible that EDMC lawyers, and maybe even government lawyers, will argue that the settlements absolve EDMC of all claims against it by federal authorities, even those unrelated to incentive compensation. I sure hope that’s not the case.

Either way, not only did the company get off easy; the investors and executives who ran and owned EDMC seem to have escaped responsibility altogether.

The New York Post interviewed Harry Litman, a lawyer for the whistleblowers, and reported: “Litman said the government never seriously considered expanding its investigation beyond EDMC to see if its private equity owners during the time of the alleged abuses — Providence Equity Partners and Goldman Sachs — were part of the scheme, even though those owners likely could have paid a much larger settlement.” The Post might also have mentioned the third enterprise involved in the 2006 private equity takeover of EDMC, Leeds Equity Partners, run by indignant private equity man Jeffrey Leeds. As the Post suggests, all of those folks ought to have plenty of cash on hand, even if EDMC says it’s dirt poor.

On the day of the EDMC settlement, the AP reported that former EDMC CEO (and former Maine governor) John McKernan “says he’s not familiar with the $95.5 million settlement” with EDMC.  McKernan’s successor as EDMC CEO, Todd Nelson, is now the CEO of another predatory for-profit, Career Education Corp. Nelson’s successor, Edward West, stepped down in August. All were well-compensated.

Senator Dick Durbin (D-IL) said, “EDMC’s ‘recruitment mill’ swindled federal taxpayers out of nearly $11 billion over the course of more than 10 years and lured thousands of students into taking on mountains of federal student loan debt for a worthless diploma.” He then appropriately asked, “Where’s the accountability for the executives who ran this scheme and ran away with our tax dollars?”

Why should all these people who were in charge of EDMC as it pursued a crooked course get to keep their money, when the company ripped off taxpayers, and many students, such as Army vet Mike DiGiacomo, who were deceived and abused by EDMC, are left with tens of thousands in student debt and worthless credits and degrees?

Other big for-profit colleges also have escaped harsh punishments recently. The Justice Department settled a False Claims Act case for $1.3 million this year with Kaplan, which has taken as much as $1.5 billion a year in taxpayer money.  It also settled a False Claims suit with for-profit-turned-non-profit Keiser for $335,000; that school has taken as much as $193 million annually in federal aid.

As Dennis Cariello, a long-time for-profit college industry lawyer (whose firm Hogan Marren somehow is the Department of Education-approved “independent monitor” of Zenith Education, the purchaser of many former Corinthian Colleges campuses), recently explained (see slide 7) to an industry gathering, since 2014, it has been official Justice Department policy to have its Criminal Division review all False Claims Act cases for possible criminal violations.  Did this happen in a real way with EDMC, Kaplan, and Keiser, or with the other False Claims Act cases the government has joined or actively investigated, against ITT Tech, DeVry, CollegeAmerica, Corinthian, American Commercial College, Education Affiliates, and the unbelievably egregious ATI, let alone the various FCA cases the government has declined to join?

Corinthian Colleges, one of the worst actors in the sector, and recipient of as much as $1.4 billion annually from taxpayers, finally collapsed under the weight of numerous federal and state law enforcement probes, financial mismanagement, and its deserved bad reputation. The company declared bankruptcy, claiming it had no money to pay back taxpayers, creditors, or thousands of wronged students. Where did all the money go? And why hasn’t there been more accountability for the conduct of executives like Corinthian CEO Jack Massimino, or for Corinthian’s deep-pocketed accounting firm Ernst & Young?

I don’t know all the facts about what went on inside these companies and who knew or did what. But I see a large volume of allegations by law enforcement officials of fraud and abuse at these for-profit colleges. I see a lot of students who are worse off than when they enrolled, buried in debt they cannot repay.  And I see predatory schools continuing to reap billions in taxpayer money, without a strong signal that they will genuinely be held accountable for wrongdoing.

The state attorneys general made an important contribution by getting ECMC to agree to a detailed series of requirements to reform its recruiting practices.  But such prohibitions already were part of state and federal law. They just haven’t been well enforced over the years.

Will the state AGs settle their other big multi-state investigations — against Career Education Corporation and ITT Tech — with similar financial slaps on the wrist? Will they continue to cut deals to drop single-state probes of schools like Kaplan and Career Education with small fines, commitments to do better, and no admissions of guilt?

Will the Federal Trade Commission take a similar approach, as it did in settling in May with for-profit Ashworth College, which it charged had deceptively marketed its programs as meeting the requirements set by state licensing boards, when in fact they did not?  Ashworth admitted no guilt, and the FTC imposed “an $11 million judgment” but “suspended” it “based on the institution’s inability to pay.” Broke students wronged by Ashworth received no such automatic pass.

The Miami Herald asked Joe D’Angelo, a partner at Carl Marks Advisors, a New York restructuring firm that works with for-profit colleges, about the EDMC settlement and what it might tell other college operators, and he said this: “Think about the numbers here. They settled for $100 million for the alleged crime of attracting three and a half billion in government revenue. What would you do? I’d go recruit and get another $3 billion in revenue… I don’t know that it was much of a deterrent at all.”

The for-profit college industry is in dramatic decline, brought from its arrogant high down to earth by the truth, by revelations that many (not all) of the companies in the sector have engaged in egregious misconduct. Stock prices and enrollments are way down for many companies. But the federal money still flows in for every student signed up, and in the absence of real enforcement, sharp operators will continue to be drawn to the taxpayer billions and will look for ways to short-change students. If all they will face in terms of financial penalties are like the modest ones that were imposed by the recent settlements, then deception will remain a reasonable cost of doing business — crime will continue to pay.

If law enforcement continues these half-measures, the real power will continue to reside at the U.S. Department of Education, which provides almost all of the funding for these predatory for-profit colleges. Existing regulations allow the Department to cut off federal student aid for colleges that engage in misrepresentations, recruiting violations, mismanagement, or financial irresponsibility; who get more than 90 percent of their revenue from Department funding; or whose students default on their loans at high rates.  If the Department stopped funding dishonest, poor-performing colleges, law enforcement wouldn’t need to investigate these operations in the first place.