posted at 1:14 am by David Halperin 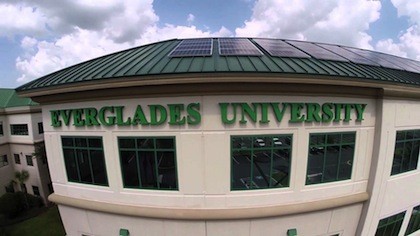 An investigative report released this morning documents how some for-profit college owners have converted their companies into non-profit schools in a way that allows them to evade the regulatory obligations and deservedly bad reputation of for-profits while continuing to reap enormous financial benefits.  These operators have done so, the report finds, by subverting the rules governing non-profit schools, while the Internal Revenue Service and the Department of Education have largely stood by, asking a few questions here and there, but allowing the abuses to go on. The report reveals a trail of broken promises, where the school operator provided a series of assurances to authorities that it would avoid lucrative conflicts of interest, but then seemed to engage in such actions left and right.

The report, authored by former U.S. deputy undersecretary of education Robert Shireman, who is now a senior fellow at the Century Foundation, reviews government documents and other materials, many obtained through the Freedom of Information Act, related to the for-profit to non-profit conversions of four institutions: Herzing University; Remington Colleges; Everglades College, which runs Everglades University and Keiser University; and the Center for Excellence in Higher Education (CEHE), now the operator of CollegeAmerica and Stevens-Henager schools. Collectively, these four institutions have been taking in more than half a billion dollars a year in federal student aid — meaning taxpayer dollars — out of the $30 billion a year that the for-profit college industry has been receiving overall.

(Disclosure: Shireman is a long-time friend and colleague and sometime client of mine. Further disclosure: I think Shireman is a national hero for his courage, determination, and creativity in taking on unethical college operators who have ripped off students and taxpayers.)

You need to read the report to get all the astounding details, but here’s a sample: a chart showing the assurances that Arthur Keiser, operator of Everglades College, made to the IRS to get his non-profit status, compared to what actually happened: 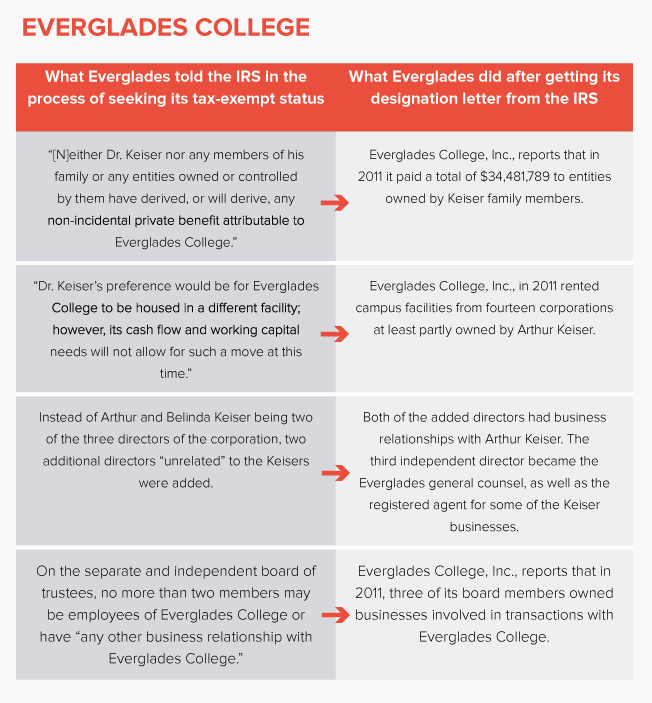 In disturbing fashion, as Shireman’s report documents, the IRS and Department of Education have failed to act when such weak promises were offered and then, seemingly, broken. Shireman urges action — specific reforms to end these abuses.

Republic Report has been covering for several years the troubling aspects of these for-profit conversions to non-profit status. The New York Times published a front-page story on the matter earlier this year (quoting both Shireman and me) entitled, “Some Owners of Private Colleges Turn a Tidy Profit by Going Nonprofit.” The Miami Herald‘s landmark series this year on the for-profit college industry focused heavily on Arthur Keiser, who has long wielded strong political influence in Florida and the U.S. Congress and has helped prevent regulation of the for-profit college industry. Now Shireman has taken these analyses to the next level.

In addition to the concerns about abuse of non-profit status, some of these institutions have problematic records as educational operations. Keiser, for example, recently paid a fine to settle a Justice Department suit alleging that it made false claims to the government.

Meanwhile, Stevens-Henager College, now owned by the non-profit CEHE, has been sued for fraud by the state of Colorado and by the Justice Department, which claims:

Stevens-Henager directly or indirectly encouraged its recruiters to enroll anyone who was willing to apply for federal funds regardless of the students’ likelihood of success or ability to benefit from Stevens-Henager’s educational programs. Stevens-Henager wrongfully procured funding for its own benefit and abused the Title IV program’s purposes.  Further, this irresponsible recruitment saddles unqualified students with large debts that are difficult or impossible to repay, leading to defaults that ultimately cost the government millions of dollars.

Carl Barney was the owner of the for-profit company that ran these schools, and he is now the “sole member” of the non-profit CEHE, with full power to hire and fire fellow board members at his whim. For purposes of the deal in which Barney sold his colleges to the non-profit he took over, the schools were valued at $636 million, $419 million of which was not for tangible assets, but instead for the colleges’ supposedly valuable reputations or “goodwill.”  Barney is set to receive $431 million in cash over time, and the remaining $205 million was declared a tax-deductible contribution from Barney to his non-profit. As Shireman puts it, “Barney is being paid and claiming a tax deduction for CEHE acquiring the reputations of colleges that are currently the subjects of multiple government investigations.” For 2013, Barney received from the non-profit CEHE more than $16 million: $11 of the purchase price with interest, $5 million for property leases, and, I guess because it’s only fair, a small salary in addition.

That’s what Barney is getting. What about his students? The CEHE schools have been spending only 16 percent of tuition revenue on instruction / teaching, compared with more than 50 percent instruction spending for nine out of ten other non-profit institutions. (Herzing devoted 39 percent to instruction, Everglades/Keiser 31 percent, and Remington 31 percent.)

Carl Barney is an interesting man: a fervid defender of free market capitalism in higher education and derider of socialism who built a college almost entirely (about 90 percent) dependent on taxpayer money — and then converted it to a non-profit.

Carl Barney also sits on the board of directors of the libertarian Cato Institute. I learned that fact yesterday from Cato’s leading higher education expert, Neal McCluskey, who has repeatedly criticized the Obama Administration for cracking down on for-profit colleges. I would have thought that a libertarian would support more accountability for waste, fraud, and abuse with federal dollars, but McCluskey told me during a lively Twitter exchange that the issue of for-profit colleges was “a distraction” from the “root” problem, which he sees as federal education policy and federal aid overall.

McCluskey also said, when I asked if CATO took money from any for-profit college interests, that he assumes that board member Barney is a CATO donor but that “has zero to do” with McCluskey’s analysis of the issues.  I am sure McCluskey is sincere in his views. He also noted that a judge in the Colorado suit had refused to issue a preliminary ruling against Carl Barney’s schools pending a final decision on the merits. But the evidence tells me that the many predatory for-profit colleges out there are far more likely than other colleges to engage in deceptive recruiting, to overcharge students, to underspend on instruction, and to mislead the government agencies that provide their funding.

And, sadly, the same concerns now apply to some former for-profit college owners who act as if they might think a non-profit can be a personal fiefdom and piggy bank.

Shireman’s investigative piece makes an extraordinary contribution, and thanks to evidence already presented by him and others, I believe the Department of Education is now feeling the urgency of addressing these kinds of abuses before the non-profit higher education sector becomes full of sharp operators taking refuge from the collapsing for-profit college industry. There are certainly other abuses of the non-profit form already going. One is debt collector company ECMC, which was approved by the Department to acquire the bulk of the old Corinthian Colleges campuses as a non-profit college system, but in many respects, so far, is acting like the prior predatory for-profit. And another is the questionable payment of charity scholarship money from a non-profit entity that Donald Graham established to Graham’s for-profit Kaplan schools. (Meanwhile, Laureate Education, the largest for-profit college company, has just announced that it will return to being a publicly-traded company, but this time with the advantages of being a “public benefit corporation,” with obligations to serve the public interest, not just shareholders.)

The struggle is far from over to make higher education a place where student and taxpayer interests are placed at the forefront, where honest and effective education enterprises reap the greatest rewards, and where greedy and duplicitous operators are shown the door.