McCain, Alexander Press DoD To Back Off Probe of U. of Phoenix, Their Donor

posted at 4:37 pm by David Halperin 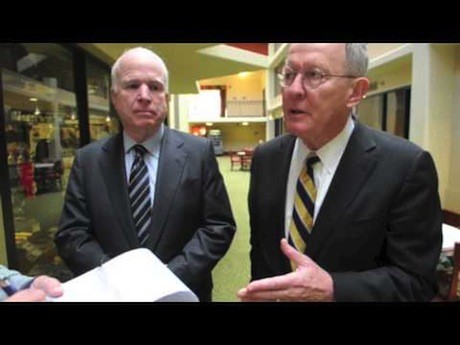 All three Senators have received significant campaign contributions from officials of Apollo Education Group, the owner of the University of Phoenix; the company is the largest donor in the 2016 election cycle to both Flake and Alexander, who is chair of the Senate committee overseeing education policy. Alexander received $10,000 from Apollo execs in the 2014 cycle and Flake received $10,500 in 2012. McCain, chairman of the Senate Armed Services Committee, received $2000 and Alexander $4000 in 2010 from Apollo employees, and all three Senators received donations from the company in earlier cycles.

Apollo also pays an army of DC lobbyists to work its will on Capitol Hill.

The Pentagon took the action this month against the University of Phoenix, citing evidence of deceptive recruiting and violations of regulations exposed by the Center for Investigative Reporting (CIR). The Department also cited ongoing investigations of the school by the Federal Trade Commission and the California attorney general. In fact, the school also is being investigated by the attorneys general of Florida, Massachusetts, and Delaware, the Securities and Exchange Commission, and the Department of Education inspector general’s office.

The CIR report found that the University of Phoenix paid the military for exclusive access to bases, held resume workshops for troops that actually served as efforts to recruit them to the school, and, without permission, included military insignias on “challenge coins” that recruiters gave to service members.

The Pentagon’s October 7 letter called the University of Phoenix’s alleged violations of the rules “disconcerting.” It suspended the school from receiving DoD Tuition Assistance for new students and banned the school’s recruiters from military bases, pending a response from the company and further review by the Department.

The three Senators claim that DOD’s action “is based on vague, technical violations that the University of Phoenix has already corrected or pledged to fix” and suggest that the decision is based on “political or ideological opinions of some Members of Congress regarding the types of institutions that provide postsecondary education to our troops.”

Their letter — bearing the signatures of the two powerful Senate committee chairmen — demands that the Pentagon provide a trove of answers and documents justifying its action.

Department of Education data has shown that the University of Phoenix’s overall graduation rate is less than 15 percent, and about 25 percent of its students default on their loans within three years of leaving school. The school spends about 27 percent of its revenue on marketing and recruiting.  A 2012 Senate report found that the University of Phoenix spent $892 per student on instruction in 2009, compared to $2,225 per student on marketing, and $2,535 per student on profit.

Why the three Republican Senators want to defend this record of weak performance at high price, plus evidence of fraud and abuse, costing taxpayers billions each year, is left unexplained by the letter.

The Senators’ letter comes on another bad day for Apollo, which today filed a report with the SEC disclosing that its student enrollment and revenue continue to plummet, and that the FTC has launched a second investigation of the school. Apollo stock dropped more than 32 percent today.