posted at 1:16 pm by David Halperin 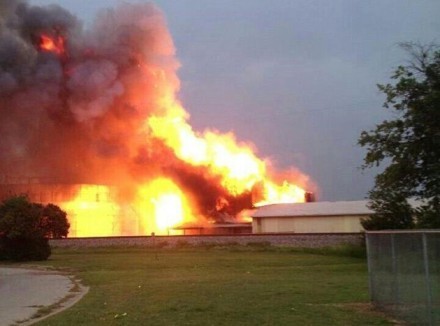 Late last week, hundreds of organizations and people sent a letter to President Obama warning that his administration is running of time to act on an issue long-identified by the President as essential to our national security and public safety: protecting our people from the dangers of accidents or deliberate attacks at U.S. chemical plants.

I signed this letter, along with leaders including retired Army General Russel Honore, the commander of Task Force Katrina, and 9-11 widow Kristen Breitweiser, and organizations including the Environmental Justice Health Alliance, United Steelworkers, Sierra Club, and Greenpeace.

I have been involved in the effort to get our government to act on this issue for more then a decade, but the basic problem identified in an op-ed I co-authored in the New York Times eleven years ago has not changed. There was then — and there is now — a real risk of another terrible chemical catastrophe, like India’s massive Bhopal tragedy. In the wake of the 9-11 attacks, it seemed clearer than ever that such a chemical disaster could be triggered not only by accident but also by terrorists.  As President Bush’s director of the Environmental Protection Agency, Christine Todd Whitman, recognized then, the public would be better protected if industrial facilities moved away from hazardous chemicals and toward safer alternatives where feasible.

Some companies, like Clorox, have taken responsibility and embraced these changes. But others, like Koch Industries, have lobbied heavily in Washington to prevent common sense reforms.  As a result, Americans remain at serious risk.

As a Senator, Barack Obama was a leading advocate of changes to prevent chemical disasters; he called these facilities “stationary weapons of mass destruction spread all across the country.” After an April 2013 ammonium nitrate explosion killed 15 people and injured 160 more in West, Texas, President Obama ordered new measures, and a group of federal agencies have been developing new rules. We don’t know yet how strong these rules will be, but we do know now that the agencies have set a timetable that seems to be too slow to ensure progress.  The next president may not share President Obama’s concern with this serious national security issue, or his determination to take on special interests in order to get real reforms.

We hope the President will heed our call, and act promptly.  Below is the text of the letter.

We write to strongly urge you to take prompt and decisive action to address a danger you have highlighted for a decade – the threat to our communities and workers from accidents or deliberate attacks on U.S. chemical plants. Your Administration is running out of time to make a real difference on this critical issue.

We were grateful when, after the tragic West, Texas disaster in April 2013, you issued Executive Order (EO) 13650, “Improving Chemical Facility Safety and Security,” that directed federal agencies to modernize safety regulations. As a result, the U.S. Environmental Protection Agency (EPA) is considering revisions to its Risk Management Program (RMP) regulation, but has postponed proposing changes until September. We believe that this schedule will jeopardize finalizing a rule before you leave office and therefore needs to be accelerated.

Your past leadership on preventing chemical disasters has been unparalleled. The millions of men, woman and children living, studying, playing and working within high risk zones near hundreds of chemical facilities are counting on you to prevent future tragedies. To ensure that new rules do take effect, they must be finalized well in advance of the end of your administration’s term in office.

EPA’s RMP data, first reported in 1999, exposed the overwhelming danger of these hazards to workers, first responders, children, and surrounding communities. In 2006, as a U.S. Senator, you stated emphatically that “these plants are stationary weapons of mass destruction spread all across the country.” According to a December 2014 Congressional Research Service analysis, 466 of these facilities each put 100,000 or more people at risk of a catastrophic disaster.

Fortunately, safer cost-effective chemical processes are widely available. Since 2001, hundreds of chemical facilities have switched to safer chemical processes and eliminated these risks to 40 million people in 47 states. For example, in 2012, the Clorox Company completed conversion of all of its U.S. facilities to a safer manufacturing process. While this is encouraging, reliance solely on voluntary efforts has left more than 100 million people in the U.S. at risk of death or injury because they live and work inside “vulnerability zones” surrounding the high-risk chemical facilities.

Section 112(r)(7)(A) of the Clean Air Act provides the EPA with rule-making authority to prevent future tragedies by requiring chemical facility owners and operators to use, where feasible, safer processes that will reduce or eliminate the potential for a catastrophic chemical incident. Safer processes are the only foolproof way to eliminate or dramatically reduce the loss of human life in such an event, whether it is triggered by an accident, natural disaster, or terrorism.

These catastrophic hazards became obvious following the 9/11 attacks and after every attack since. In 2002, the EPA under then-Administrator Christine Todd Whitman proposed using the Clean Air Act’s disaster prevention authority to make chemical facilities “inherently safer by reducing quantities of hazardous chemicals handled or stored, substituting less hazardous chemicals for extremely hazardous ones, or otherwise modifying the design of processes to reduce or eliminate chemical hazards.” Tragically, the Bush administration, under pressure from special interest lobbyists, scuttled this proposal.

In your 2008 book Change We Can Believe In you promised, “An Obama Administration will…[s]ecure our chemical plants by setting a clear set of federal regulations that all plants must follow, including improving barriers, containment, mitigation and safety training, and wherever possible, using safer technology, such as less toxic chemicals.”

On April 3, 2012, Governor Whitman wrote EPA Administrator Lisa Jackson urging the use of “authorities you can apply to reduce these hazards before a tragedy of historic proportions occurs.” And following the West, Texas, disaster, then-EPA Administrator Jackson told MSNBC, “We need to use the authority we have now.”

Due to the billions of dollars of potential liability, the Association of American Railroads issued a statement in 2008 saying: “It’s time for the big chemical companies to do their part to help protect America. They should stop manufacturing dangerous chemicals when safer substitutes are available…” More recently, the U.S. Chemical Safety Board recommended in its May 1, 2014 final report on the 2010 Tesoro refinery disaster that the EPA issue new rules under the Agency’s Clean Air Act authority

We respectfully urge you to use your authority to expedite finalizing a rule that will eliminate these potentially catastrophic hazards wherever feasible. As organizations committed to this objective, we look to your office to ensure that this critical rule is finalized as soon as possible.

Thank you for your leadership on this important issue.

Erich Pica
Friends of the Earth

Jeremy Hays
Green For All