posted at 8:24 am by David Halperin 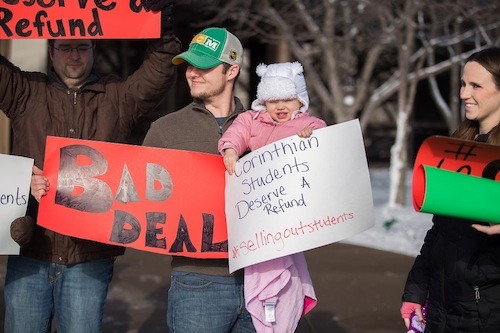 A group of Democratic members of the House of Representatives are sending a letter this morning calling on the Department of Education to “automatically discharge the debt” of all students who attended campuses run by now-bankrupt Corinthian Colleges, one of the worst actors in the scandalized for-profit college sector.

Given what these Members believe is “widespread evidence of Corinthian’s predatory practices” and “systematic fraud,” as documented by federal and state investigations, they argue that permitting all Corinthian students to avoid a “lengthy application and approval process” is “the only way to ensure that every deserving student receives the relief they are entitled to under the law.”

The House Members letter reflects the frustration of congressional champions of students that the Department is moving too slowly in reaching out to, and forgiving the debts of, students who attended schools operated by Corinthian. Numerous government and media investigations indicate that Corinthian engaged in widespread fraud — deceiving students and government regulators about job placement rates and a wide range of other matters.

“The appointment of a Special Master to handle debt relief for Corinthian College victims was encouraging, but the lack of progress in the months that have followed has been a significant disappointment,” Rep. Hahn said in a statement.

The House letter does not indicate how far back in time the lawmakers believe the Department should go in forgiving Corinthian student debt.  The Department and Smith have repeatedly referred to their work in cleaning up the mess of Corinthian and other predatory for-profit colleges as addressing the discharge of Direct Loans. But most federal loans, until landmark legislation passed in 2o1o, were federally-guaranteed but privately-issued loans under the Federal Family Education Loan (FFEL) Program, rather than federally-issued Direct Loans.  Advocates for students have repeatedly pressed for inclusion of these FFEL loans in the process, including at two public hearings the Department held in recent weeks, and Department officials have told me they have heard that message loud and clear.

The House letter criticizes Smith’s September 3 tepid initial report to the Department for failing “to provide a detailed outreach plan, or outline student eligibility for relief.” The lawmakers also say that the failure of the report to provide a timeline by which the Department will process student claims for debt relief “is unacceptable, given that the Department has already received nearly 4,000 defense to repayment claims.” The letter also complains that the Department has contacted only the students who attended Corinthian’s Heald College, even though “Heald College campuses represent a small portion of the students who were defrauded” by Corinthian. The lawmakers, moreover, call on the Department to use multiple means to reach out to students — not just email, but certified mail, telephone, and through ads and social media.

A strong New York Times editorial over the weekend was in a similar vein, complaining that not a single student who has sought loan forgiveness has been granted relief yet, despite “overwhelming evidence of fraud” by Corinthian. The editorial reports that the Department now says that the claims of Heald students will be decided in November and other Corinthian student claims will be addressed “as swiftly and fairly as possible.” But the editorial worries that “the department’s legendary bureaucracy will drag its feet and make it difficult for deserving plaintiffs to get relief.”

Eleven state attorneys general, led by Maura Healey of Massachusetts, wrote to Smith and Secretary Duncan last month, also urging faster, easier relief for Corinthian students and asking the Department of Education to call on state AGs to provide evidence of systematic fraud at Corinthian and other predatory colleges in order to support student claims. Thirty-seven state AGs are working collaboratively on efforts to probe abuses in the for-profit college industry.

It’s clear to me from recent discussions that federal and state law enforcement officials are now working more closely together to share information on their probes of the industry, and that could help speed the kind of findings of systematic fraud that could bring faster student debt relief. Putting state investigations to work for debt relief would be especially good news given that the AGs, unfortunately, continue to settle complaints against predatory schools, such as recent cases brought by Healey against Kaplan and Lincoln Tech, without sharing with the public any findings or evidence of wrongdoing (and with relatively small financial penalties).

There’s no denying that making whole all the students who were abused by predatory colleges will be expensive. While there are some good, honest operators in for-profit education, many other companies — large and small — have long engaged in egregious abuses, as reflected in the scores of federal and state law enforcement investigations now ongoing. Students deserve relief, especially given that they were reeled in to these high-priced, low-quality programs by twin lures: first, deceptive promises from the schools; and second, the availability of the Department of Education’s federal student aid, which functioned as a Good Housekeeping seal for the programs.

This morning, Senators Dick Durbin (D-IL) and Chris Murphy (D-CT), standing with the Center for American Progress’s Higher Ed, Not Debt campaign, are scheduled to introduce legislation aimed at increasing government oversight of for-profit colleges and holding predatory companies and their executives accountable for abuses.  These are welcome, valuable measures. But the executive branch already has tools to stop bad actors, if it would only use them.

My colleagues and I have repeatedly expressed to Department of Education and other executive branch officials our hope that the looming cost of forgiving loans will motivate them to start enforcing all the regulations they currently have at their disposal to cut off the spigot of federal money now to bad actors — the prohibitions in federal law on misrepresentation and on paying recruiters commissions; the requirements that colleges be responsible financially and post letters of credit sufficient to cover losses; the rule limiting a for-profit college from receiving more than 90 percent of its revenue from federal aid; the rule punishing programs that consistently have high student loan default rates; the new “gainful employment” rule, penalizing programs that regularly leave graduates with low incomes and overwhelming debt. The Department should be acting much more promptly to enforce these rules, to make public its findings, and to impose sanctions where and when it finds violations.

Otherwise the mess will only get worse, and more expensive to clean up.  While Corinthian has been declared a disaster area in need of a bailout, numerous other predatory companies continue to take in billions of dollars in federal aid. Despite dramatically higher public awareness of for-profit college abuses, leading to plummeting student enrollments, while you have been reading this article, predatory colleges are enticing yet another group of Americans — busy single parents, returning veterans, immigrants, and others — to sign up for programs that will ruin their financial futures. It’s time to stop the hemorrhaging. The college scam artists, whether of the strip mall or the Wall Street variety, need to be cut off, for good.