posted at 2:03 pm by David Halperin 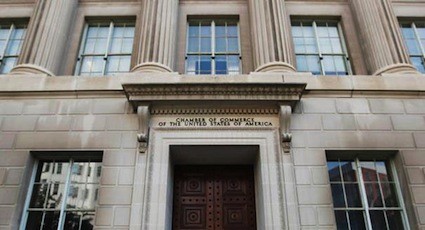 The for-profit college’s trade association, APSCU, was once mighty but is now hobbled, discredited, and depleted. Yet the group, and its industry, still have the money — most it from taxpayer-funded student aid to its schools —  to lobby, give campaign contributions to politicians, and hire lawyers to fight its biggest piece of Kryptonite: the Obama Administration’s “gainful employment” rule. The Department of Education issued this regulation earlier this year, and it is scheduled to go into effect at a still-undetermined time.

APSCU challenged the rule in federal district court, but Judge John D. Bates, a George W. Bush appointee, upheld the rule in all respects. So APSCU is spending more of your tax money to appeal that decision to the U.S. Court of Appeals for the District of Columbia. (For-profit colleges in New York filed a separate suit in Manhattan to overturn the rule, and the federal judge in that case also upheld the rule entirely; the colleges didn’t appeal.)

This week, the U.S. Chamber of Commerce and Rocky Vista University, a for-profit medical school based in Colorado, each filed legal briefs in court supporting APSCU’s appeal. The Chamber appears to rent itself to lobby for its members, i.e. corporations that give it money. We don’t know who those members are, because “It is the policy of the U.S. Chamber of Commerce not to distribute or make public information about our members.” What a proud group.

The Chamber brief is the usual misleading nonsense, and the lawyers at WilmerHale who wrote it should be embarrassed, both for their fallacious arguments and for defending predatory companies that have been ripping off taxpayers and ruining the lives of veterans, single parents, and others struggling to build better futures.

Contrary to the impression the Chamber’s brief leaves, the gainful rule doesn’t outlaw for-profit colleges; it would cut off federal student aid to a small percentage of programs, whether in for-profit or non-profit schools, that consistently leave students with overwhelming debt, because they charge too much, admit students whom the program is not strong enough to help, and overall offer too weak a program to help enough students get sufficiently high-paying jobs. That couldn’t be more rational and appropriate.

The Rocky Vista brief says the rule must be arbitrary because Rocky Vista is good but it will nevertheless flunk the rule. But the Department is within its authority to protect students and taxpayers by defining good the way it did.

But in many cases these schools charge too much, and they spend too little on instruction. As to admitting students whom the program won’t help, sometimes these owners say they just can’t predict who will succeed and who won’t. But that’s what the function of ADMISSIONS is all about. If some well-meaning college operators have to revise their programs or risk losing eligibility under gainful employment because they cannot manage their company in a way that meets these minimal requirements, that is the right outcome under a rule that will help protect students and will help curb some of the worst abuses of the most fraudulent and cynical schools.

Our coalition of student, veterans, civil rights, and educator groups filed briefs in DC and New York supporting the U.S. Justice Department’s argument that the rule should be affirmed, and we plan to do so again in the appeals court.

The whole expensive legal process — wherein taxpayers are paying for the for-profit college lawyers, the government lawyers, and the judge and court apparatus — may become moot, because the for-profit college lobbyists are back in force on Capitol Hill, using their high-priced, connected lobbyists, financial friendliness with almost the entire GOP caucus in both houses of Congress, and similar ownership of select Democrats, to try to push through amendments that will delete the gainful employment rule and other provisions aimed at holding predatory for-profit colleges accountable.

Despite increasingly strong words from President Obama and departing Secretary of Education Arne Duncan regarding the abuses of the for-profit college industry and the need for the gainful employment rule, the Administration has not committed to vetoing any bill that blocked the rule. With so many students now demanding that their student loans be forgiven because of the deceptive and shoddy practices of for-profit colleges, and a throng of GOP presidential candidates competing to show the greatest fealty to their generous contributors in the industry, the least the Administration can do is to protect the gainful rule, and enforce other existing rules, to stop this entitled, unprincipled industry from returning full-on to its abusive ways.