posted at 7:00 pm by Matthew Kasper

The emails and documents reveal that Association of Electric Companies of Texas (AECT) and utility employees held private meetings with state regulators to discuss revisions to the permits and provided language that was incorporated verbatim by the regulations into the final text of the revised permits. The language ended up nullifying the federal Clean Air Act hourly limits on particulate pollution during the startup, shutdown, and maintenance periods (SSM) at the coal plants.

These changes to the permits allowed electric utility companies in Texas to emit more particulate pollution than allowed by federal standards. In one case, for example, the coal plants are allowed to emit 30 times more pollution than the previous limit. Particulate pollution is the fly ash emitted from power plants, which can cause serious health effects such as lung cancer and heart disease.

It is possible that the reason AECT and its members sought to revise the permits was to avoid changing the emission limits in the EPA approved State Implementation Plan (SIP), because doing so would have required public notices and re-approval from the EPA.

“If the State wishes to issue a NSR [new source review] SIP permit that does not meet the applicable requirements of the Texas SIP, then any such alternative limits would need to be submitted to EPA for approval as a source-specific revision to the SIP, before they would modify the federally applicable emission limits in the approved SIP.”

An email from Sean O’Brien, a technical specialist in the Air Permits Division at TCEQ, to other employees at the TCEQ shows awareness of EPA’s re-approval requirement:

“It is not sufficient to say that the emissions are not new to avoid a federal new source review (NSR). You may treat the authorization of maintenance, start-up, and shutdown (MSS) at your site as a project and determine federal NSR applicability as follows.”

A statement from Terry Clawson, a spokesperson from TCEQ, said, because there is less than “de minimis increase” in annual emissions (an increase less than 50 tons of carbon monoxide, 10 tons of sulfur dioxide, or a five ton increase of any other air contaminant) the public notice for the permits was not required.

The emails also show that the utility industry set the agenda for the private meetings. On March 22, 2010, Craig Eckberg, a senior manager at NRG Energy, sent an email to Erik Hendrickson, a technical specialist in the Air Permits Division at TCEQ, and other regulators, with the proposed agenda to discuss the air permits. The documents show additional meetings took place throughout the year, including a July meeting where the draft language for the permits was discussed. And a memo from AECT to Hendrickson directs any questions TCEQ might have to Usha Turner of Luminant, Craig Eckberg of NRG Energy, or Keith Courtney of Winstead PC, a law firm based in Texas.

“The purpose of the meetings was to provide direction to regulated entities and address questions prior to submittal of planned MMS applications,” said TCEQ in the released statement.

In addition to this discovery, Texas community and public interest organizations have petitioned the U.S. EPA today to overturn the decision to exempt the coal power plants, 19 to be precise, from federal limits on particulates during SSM.

“These exemptions for coal-fired power plants are evidence of the state’s chronic disregard of federal Clean Air Act standards,” said Eric Schaeffer, executive director of the Environmental Integrity Project, in a press release. “EPA should now step in and force Texas to tighten up these permits to protect public health.”

Brad Watson, a spokesperson for Luminant, told Republic Report, “Regardless of the forum, EIP’s claims still collapse under the weight of the facts. These emissions are unavoidable and de minimis emission events.  EIP and other environmental groups have already sued over these emissions in at least two cases and lost both times, including a case filed by EIP that Luminant won last year involving Luminant’s Big Brown Power Plant in Freestone County.”

The image below is from the Environmental Integrity Project and shows the increase in revised limits for the coal plants. 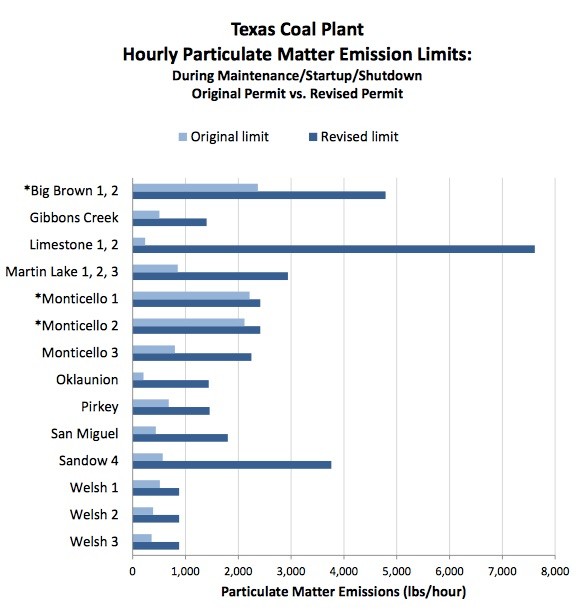 The collaboration between Texas regulators and the utility industry is just the latest in an expanding list of examples showing the influence power companies have with state regulators and decision-makers.

A report released this month from Greater Birmingham Ministries (GBM) finds that from 2007 to 2014, the Alabama Public Service Commission (PSC) approved rate increases for Southern Company’s subsidiary, Alabama Power, allowing the subsidiary to increase retail revenues by 18.6%. The average annual cost for residential customers has risen by $250 a year even though customers are using less electricity. Another rate hike for Alabama Power customers was approved in December 2014 by the PSC, which will add another $75 to the average residential customer’s bill.

Alabama Power has said the reoccurring rate increases are the cost of doing business and updating power plants, but GBM reveals that earnings have been spent partially on boosting the salaries and other compensation for the company’s top executives, as well as increasing dividends for shareholders.

In Wisconsin, it was revealed that the Metropolitan Milwaukee Association of Commerce (MMAC) was behind the push to have the Joint Committee on Finance defund the Citizens’ Utility Board, the state’s consumer advocate in the utility regulatory process. Gale Klappa, CEO of We Energies, the state’s largest utility, is vice-chairman of the MMAC board. MMAC has stated that We Energies was not involved.

And just last week, new evidence was publicized suggesting Arizona Corporation Commissioner Bob Stump has been coordinating with an executive from the state’s largest utility, Arizona Public Service (APS), as well as a “dark money group” involved in the elections for commissioners. This in addition to a whistleblower letter alleging former commission chairman Gary Pierce held secret meetings with APS’ chief executive, Don Brandt, as well as helped steer money that targeted two Democratic candidates for the ACC in 2012. The attorney general’s office is now investigating the accusations.

The picture of the Big Brown coal-fired power plant operated by Luminant, a subsidiary of Energy Future Holdings, has been changed to reflect the correct power plant station.