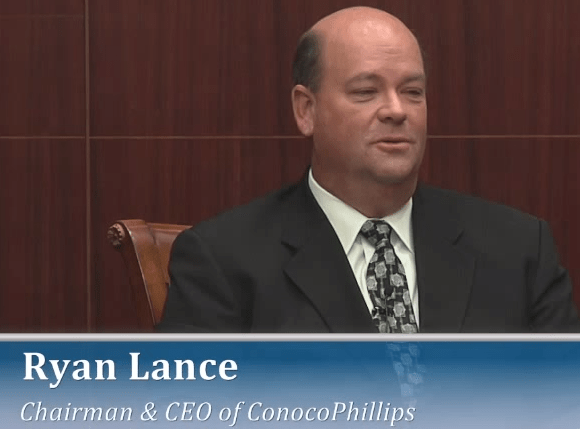 Ryan Lance, the chief executive office of ConocoPhillips, was walking the hall of Congress as lawmakers debated the Keystone XL, a key priority for the company, which owns a significant stake in Canadian tar sands. TransCanada has disclosed that ConocoPhillips is slated to ship tar sands oil using the Keystone XL pipeline.

“Ryan’s as comfortable on an oil rig in the Gulf of Mexico or in Malaysia as he is walking the halls of Congress, as he’s been doing over the last couple of days,” noted former Assistant Secretary of Defense Richard Armitage, speaking at an event with Lance at the Center for Strategic and International Studies last week. Armitage now serves on the board of ConocoPhillips.

On January 9th, the House of Representatives voted to force approval of the controversial pipeline. Though President Barack Obama has made clear that he would veto the bill, all eyes are on the U.S. Senate, which is set to pass the bill.

Fossil fuel interests that stand to gain from approval of the pipeline have pressured legislators in a myriad of ways, from funding grassroots petition drives, airing television advertisements, hiring lobbyists, and even retaining senior Democratic officials with access to power in the White House, such as Anita Dunn, a closer Obama advisor.

As observers have noted, the 2014 midterm elections were filled with the most untraceable campaign money in modern history. The new 114th Congress appears particularly focused on energy and Wall Street-related issues, leading some to wonder if these industries provided the secret campaign cash necessary for lawmakers to win reelection.

Asked by Republic Report if his firm donated to any undisclosed campaign entities, such as a 501c(4) non-profit or trade association, Lance did not address the question directly. “Well, we publicize all of our contributions. You can go find them on our website or with Congress, what they publicize.”

But the ConocoPhillips website only lists donations during calendar year 2013, which shows the company gave $126,700 to federal candidates. In addition, the company website says it “generally” avoids funding SuperPACs or undisclosed trade association campaign efforts, but does not provide more clarity beyond that statement.