A state court in Denver has just unsealed the complaint that the Colorado attorney general brought late last year against CollegeAmerica / Stevens-Henager, a former for-profit college network that recently converted to non-profit status. The school’s conversion seems to enrich its founder in ways that disturbingly distort the concept of a non-profit, but its apparent abuses of students are even more troubling.

Last year the U.S. Justice Department joined an employee whistleblower lawsuit charging that College America / Stevens-Henager schools paid their recruiters bonuses, commissions, and other forms of incentive compensation in violation of the federal ban on such compensation. The suit further claims that CollegeAmerica employed faculty members who lacked the minimum qualifications required by the school’s accrediting agency, and that CollegeAmerica officials falsified student attendance records and grades.

The new Colorado complaint ups the ante: It provides new and absolutely shocking allegations of systematic, sophisticated fleecing of students and taxpayers by CollegeAmerica. The lawsuit asserts that CollegeAmerica staff consistently misled and lied to students about the selectivity of the school, the transferability of credits, the jobs they could obtain, the salaries they could earn, and more.

In one stunning example, the school, according to the Colorado attorney general, hyped its “Medical Specialties” associates degree as leading to lucrative careers in a range of medical jobs. The program cost $42,000 — more than four times as much as comparable degree programs at community colleges. But most of the jobs that graduates had a chance to get were low-level, low-paid positions did not require a college degree at all.  Once students had completed the program, CollegeAmerica employees would then sometimes disparage the value of the program and hype the next expensive program — a bachelor’s degree in Healthcare Administration. But again, most graduates could only get low-rung jobs that did not require an associate’s degree, let alone a bachelor’s.

CollegeAmerica has responded that Colorado’s suit is “full of distortions, half-truths and false allegations.”

Students who get deceived by college recruiters often end up worse off than when they started. CollegeAmerica schools have established records of leaving their students deep in debt. For example, as of 2009, 40.2 percent of students at the Flagstaff, Arizona, campus of CollegeAmerica defaulted on their loans within three years. The figure was 38.8 percent at the CollegeAmerica campus in Denver. For comparison, the default rate at Michigan State University was 4.3 percent.

Raul Valdes Pages, a long-time for-profit college executive who has recently been speaking out against abuses in the industry, personally witnessed the deceptive, offensive tactics of CollegeAmerica when the school sent a recruiting mailing to his daughter. He complained to Stephen Friedheim, a long-time consultant to for-profit colleges.  You can read the exchange that followed: 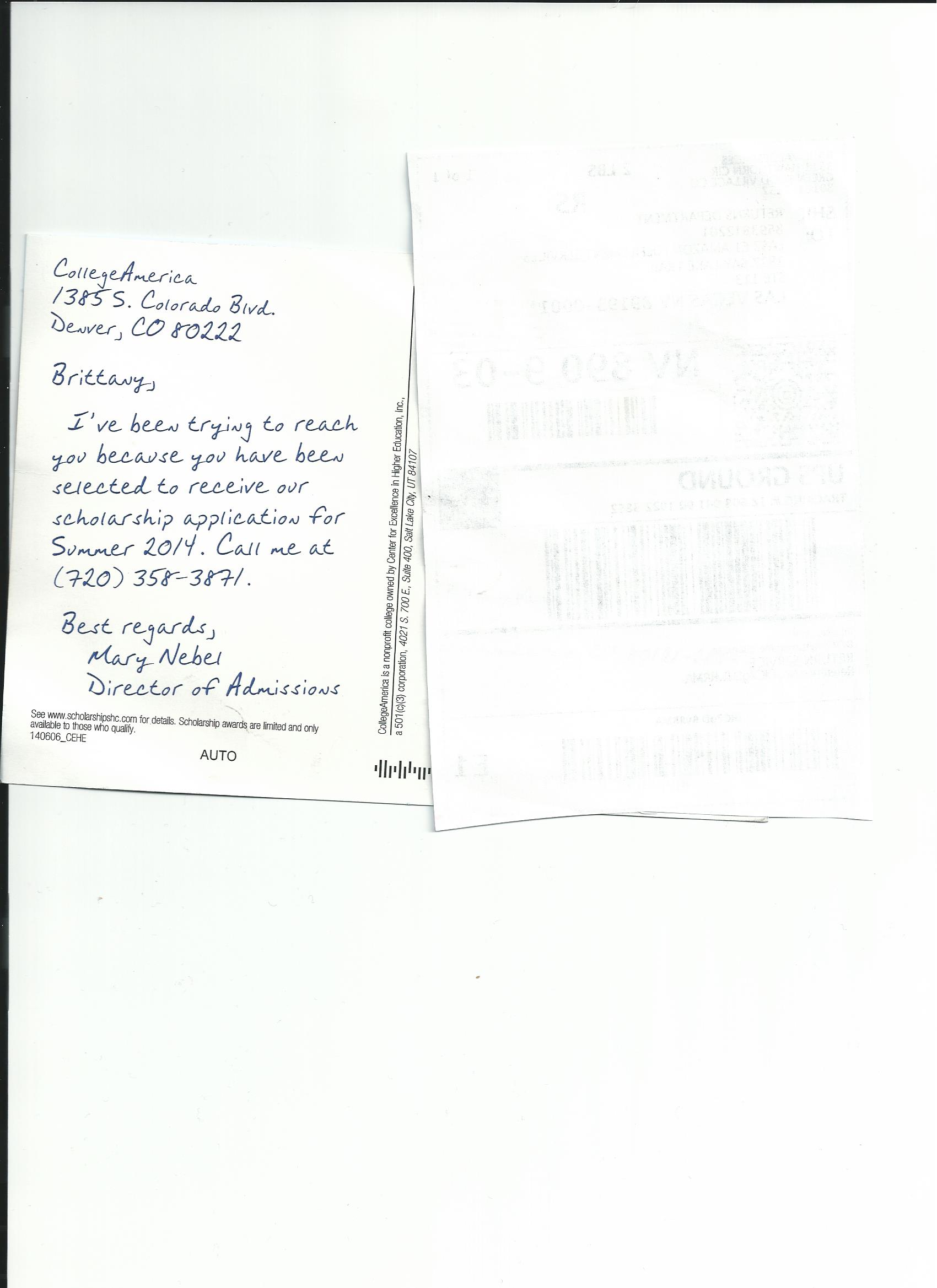 Steve Friedheim forwarded me your message.  I know we’ve met in the past – I think it was at one of the school groups (BERA, PERK, etc.) meetings.

Anyway, I am the CEO for the group that owns and operates CollegeAmerica.  I’m sorry if this direct mail has been repeatedly sent your daughter after you requested it cease.  Could you tell me who you spoke with when you asked CollegeAmerica to cease this practice?  I’d like to find out what happened and why her name wasn’t deleted for mailings.

Since you indicate that your daughter never contacted the college – I can only assume that her name was part of a direct mailing list that we acquired.  We do a fair amount of direct mail campaigns and we are always selecting and testing different lists – so I assume that’s how she got into our system.

You say in your email to Steve that you, “sent this to Halperin.”  Who or what is Halperin?  If you would like to call me or email me and provide your daughter’s name – I will make sure that she is deleted from our database .

Center for Excellence In Higher Education

Eric, I called the Denver office of College America and spoke with reception office. The previous two post cards told her she had received a Scholarship. I told reception to pass along to College Director, who was not available, that I believed post card was misleading , that I thought practice should stop and my daughter’s name should be removed from mailing list (she has not lived at my address for ten years).

The card I received yesterday altered Scholarship language to encourage to apply as opposed to “you have received”. The “come on” is still the Scholarship and if I was still on ACCSC Commission I would have real problems with this attempt to recruit using Scholarships. ACCSC I believe still bans such practice. I am intrigued that she keeps getting Direct Mail. Are you buying “Hispanic” women? Not sure how her name would make it to mailing list and I have vast experience with them at DeVry.

… Asides from removing her name, I hope College America stops using Scholarships as “bait” to recruit Students. David Halperin is blogger for Huffington and a lawyer. Your company is not the only one pushing the envelope with “Scholarships” and I wanted to provide the practice with sunlight. Students, in my opinion, should go to College to better themselves and not because of Financial inducements such as Scholarships or living expenses from Loans. Thanks for your prompt response.