posted at 8:24 pm by David Halperin 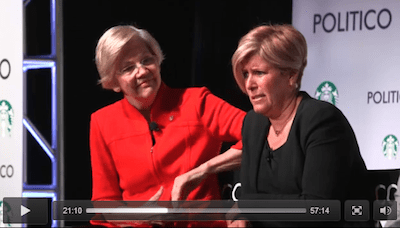 At an event in Washington DC this morning, speaking alongside Senator Elizabeth Warren (D-MA), financial guru Suze Orman at first seemed to deny what is a documented fact: that she teaches a personal finance course at the nation’s biggest for-profit college, the University of Phoenix.  Then Orman admitted it, but offered a wholly unconvincing explanation.

The event, hosted by Politico and sponsored by Starbucks, addressed the issue of educational opportunity and student debt, issues on which Senator Warren has been a leader. Having read a tweet I sent yesterday, Politico reporter Allie Grasgreen asked Orman a highly relevant question:

Q: Suze, are you teaching classes at the University of Phoenix?

Orman: Now wait, let me just say something about that. I did a personal finance course for the University of Phoenix, the first credited one — under the guise that if you take that course and you look at the beginning of it, it says you cannot take out student loans if you cannot afford it. If you cannot afford to go to this college, I want you to drop out right now. Just so you know.

It’s hard to square Orman’s initial denial with the admission that immediately followed. Perhaps it was a lawyerish parsing — “it depends on what the meaning of ‘at’ is.”  But perhaps Orman just wasn’t comfortable admitting that she has been paid to lend her expertise and credibility to a business with a record of leaving many students with overwhelming debt.

Suze Orman not only was hired by the University of Phoenix to teach an online personal finance course, but also last year she appeared at a Capitol Hill event where she promoted the school. It’s difficult to understand how a person who proclaims herself “undeniably America’s most recognized expert on personal finance” could accept such a role when, for many people, enrolling at a for-profit college can be the worst financial decision they make in their entire lives.

While some graduates of the University of Phoenix and other for-profit colleges have succeeded in building strong careers, many students fare poorly, as many of the big for-profit schools, including Phoenix, have sky-high prices, low actual spending on student instruction, high dropout rates, and weak job placement records.

The graduation rate at the University of Phoenix — meaning the percent of first-time undergraduates who earn a degree within six years — is about 16 percent; for the university’s online students, the rate is about four percent.

The result is that often former students end up with overwhelming debt; for-profit colleges have 13 percent of U.S. college students, but an astonishing 47 percent of student loan defaults. Most of the biggest for-profit schools, including Phoenix, are now under investigation by federal and state law enforcement agencies for abusing students.

In a 2012 appearance on “Oprah’s Money Class” Orman stated emphatically, “Private student loans should be avoided at all costs.” This is very good advice. Private student loans, in contrast to federal direct loans, have high interest rates and origination fees and are not subject to most loan forgiveness programs. They quickly bury students in an avalanche of debt.

Yet the University of Phoenix routinely channels its students into private student loans.

The school’s website does “recommend” that “private loans only be considered after applying for federal financial aid,” but it then quickly gets down to business and, until recently (and I pointed it out), directed students to a private company’s website, Student Lending Analytics, that compares private loan providers and offers links to private lender websites.

Yet by December 2011, Orman was already singling out the University of Phoenix in USA Today for praise, saying that the school “makes all its students go through a free and mandatory three-week orientation course to make sure they understand the full costs of college before they sign on the dotted line.” And by last year she had joined the faculty, and she appeared at an event in the halls of Congress just as the University of Phoenix and other for-profit schools were lobbying for congressional support to fend off the Obama Administration’s “gainful employment” rule, which would hold career training programs accountable precisely for leaving students with insurmountable debt. Perhaps some Members of Congress, inclined to worry about the value and conduct of for-profit colleges, were reassured by Orman’s celebrity endorsement of the University of Phoenix.

Orman can be seen on the University of Phoenix website, firmly warning students against over-borrowing, seemingly oblivious to the fact that 26 percent of the students at the school default on even their low-interest federal loans within three years of leaving.

The University of Phoenix started as a decent idea — give working adults, often people with good jobs, the opportunity to earn a degree online or at convenient times, so they could advance their careers.  But as one of the company’s founders recently admitted, during the George W. Bush administration, as federal rules were relaxed and big for-profit colleges had the potential to make billions, “the University of Phoenix abandoned its founding mission of solely serving working adult learners to admit virtually anyone with a high school diploma or GED.” Phoenix joined other big players like Corinthian, ITT, and EDMC in a race to the bottom — signing up as many students as possible, without regard to whether the school would help them, or bury them in debt.  The company’s CEO, the late John Sperling, also joined other for-profit colleges in lobbying the Obama Administration and Congress relentlessly to block new accountability rules — and part of that effort including leasing influential Washington friends like, as now appears to have been confirmed, Melanie Sloan, the head of the ethics watchdog group CREW.

Orman’s explanation at the Politico forum for becoming another paid friend of the University of Phoenix was that her online class comes with a warning to drop the class, or drop out of the school entirely, if they can’t afford the costs.  But many of the students encounter Orman’s class when they are already deep into an academic program, at a point when they face a terrible choice — keep paying Phoenix’s high prices to complete a dubious degree, or else drop out, with the great likelihood that the Phoenix credits will not transfer to most other colleges, and the student will have to start all over.  Orman also ignored the fact that her presence as a celebrity University of Phoenix faculty member enhances the lure of the school for students — offering a Good Housekeeping endorsement that likely has been touted by Phoenix sales representatives to reel in students across the country to a program that might end up destroying their financial futures.

One of the two Politico moderators for the event, Mike Allen (the other was Maggie Haberman), seemed anxious to cut off his colleague Grasgreen’s line of questioning, jumping in at Orman’s initial denial and then again quickly when she offered her dubious response. It’s always good to be considerate of your guests, but some of us would have been interested to hear more about how Orman could present herself as a champion of students while lending her credibility to one of America’s predatory for-profit colleges.