posted at 8:56 am by David Halperin 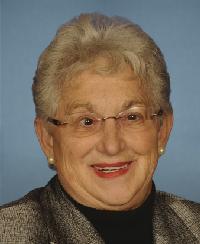 As reported yesterday by OpenSecrets, Representative Virginia Foxx (R-NC) has no serious opposition in her bid for reelection, yet has received more than $800,000 in campaign contributions. More than half of that money has come from outside North Carolina, much of it from corporate special interests.

The biggest industry donating to Foxx, who is chair of the House subcommittee on higher education, is the for-profit education industry, which is fighting to stop the Obama Administration’s “gainful employment” rule.  That regulation, for which public comments are due on Tuesday, would hold predatory companies in the career education industry accountable for its heavily-documented waste, fraud, and abuse with federal tax dollars and for the countless students across the country who have been left with worthless degrees and overwhelming debt.

For-profit colleges don’t have any credible arguments against the gainful employment rule, so instead they use the thing that talks loudest in Washington: money. And they have plenty of it; despite declining enrollments and plunging share prices amid mounting public awareness of industry abuses, the for-profit colleges have cash to spend, because their industry has been getting as much as $33 billion per year from taxpayers.

The single biggest donor group to Foxx, by almost a factor of two, is Santa Ana, California-based, for-profit Corinthian Colleges.

Corinthian, which operates Everest, Heald and WyoTech colleges, has a troubling record. The company faces a major lawsuit from California attorney general Kamala Harris, who has charged that Corinthian has engaged in “false and predatory advertising, intentional misrepresentations to students, securities fraud and unlawful use of military seals in advertisements.” Corinthian is also under investigation by a group of sixteen state attorneys general (Arkansas, Arizona, Colorado, Connecticut, Hawaii, Idaho, Iowa, Kentucky, Missouri, Nebraska, New Mexico, North Carolina, Oregon, Tennessee, Washington and Pennsylvania) into its recruiting and business practices, and faces a separate probe by Massachusetts’ AG.

Federal investigators also are probing Corinthian. In June 2013, the Securities and Exchange Commission issued a subpoena to the company concerning student recruitment, degree completion, job placement, loan defaults and compliance with U.S. Education Department rules. In September 2013 Corinthian reported that the U.S. Justice Department is investigating claims that the company violated the False Claims Act with respect to its recruiting and financial aid practices and by, among other things, manipulating attendance records to keep federal aid for students no longer in attendance. In December 2013, the Consumer Financial Protection Bureau notified Corinthian that it expected to pursue legal action against the company for violation of federal laws with respect to private students loans.

And in January, even the U.S. Department of Education, whose enforcement efforts have generally failed to address for-profit colleges abuses, moved toward taking tough measures with Corinthian, saying in a letter to the company that there were signs of “systematic deficiencies” in its operations and charging that the company “has admitted to falsifying placement rates and/or grad and attendance records at various institutions and because of ongoing state and federal investigations into serious allegations.”

Corinthian fared poorly under a trial run of an earlier version of the gainful employment rule, which would take away eligibility for federal student grants and loans from schools whose graduates and dropouts are consistently unable to repay their student loans.  Schools with high prices and poor records of training and placing students tend to flunk the gainful employment test, because their students borrow too much and earn too little after leaving.

Foxx in the past has invoked the Nazi Holocaust in discussing regulation of for-profit colleges, and on another occasion stated that she has “very little tolerance for people who tell me that they graduate with $200,000 of debt or even $80,000 of debt.”

Corinthian is a member of the for-profit trade association APSCU, which is leading the opposition to the gainful employment rule. Corinthian also spent $310,000 in the first quarter of 2014 for its own lobbying team, included former Rep. Vic Fazio (D-CA) from the law firm Akin Gump.

Foxx, along with House education committee chairman John Kline (R-MN), another major recipient of for-profit college campaign cash, has led the effort in the House to oppose the gainful employment rule and other measures to curb abuses by for-profit colleges.  Foxx is lead sponsor of the “Supporting Academic Freedom Through Regulatory Relief Act,” which has nothing to do with actual academic freedom, but instead would block the gainful employment rule and also would relax federal standards so for-profit college boiler room operations can more easily engage in coercive recruiting of students.

CQ reported yesterday that Kline is urging House appropriations committee members to include a policy rider in the Labor-HHS-Education bill blocking the gainful employment rule.