This veteran says: Obama rule would help students and taxpayers

posted at 2:41 pm by Mike DiGiacomo 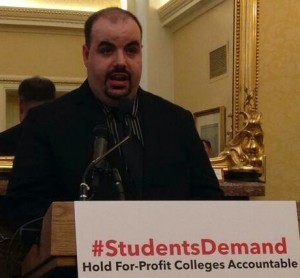 I am a veteran who served in the US Army and the Massachusetts Army National Guard. Last week the Boston Globe published an editorial entitled, “Obama chooses wrong path to reform for-profit colleges,” and I am furious. As a former student who was misled by not one but two of the country’s biggest for-profit colleges, I must say the gainful employment rule that the Globe editorial attacks is only wrong in that it doesn’t go far enough to hold accountable companies that are abusing the poor, vulnerable, and veterans. It gives the for-profit college industry an easy stay-of-execution for unconscionable tactics, worse than those engaged in by the banks that triggered the home mortgage crisis.

I have seen the deceptive practices first hand. I was deceived and ripped off by Career Education Corp’s Katherine Gibbs College (now Sanford-Brown) in Boston and Education Management Corp’s New England Institute of Art (NEIA also known as “Ai” & “The Art Institutes”) in Brookline. When I graduated from Gibbs, I was given a degree that was not the one I had been promised. It was also worthless in the job market. The internship at a TV studio that Gibbs promised me turned out to be a wedding photographer who asked me to move his laundry. Their idea of job placement and connections was having me apply blindly to a retail job that only required a high school diploma. When I attempted to transfer to what I was led to believe was a better, higher quality college with amazing results — NEIA — I again was left with nothing but debt. I dropped out after the school pressed me into taking out more and more loans, until I knew I couldn’t afford any more. The chance I had at going to a good college with a good program that would lead to a great job was wasted by these predators looking to make a quick buck.

I have over $96,000 in student debt and was unable to find a job. I found a job recently based on my military experience, totally unrelated to the “colleges” I went to.

These for-profit college companies create impulse-buy programs with no real world value. They recruit based on deceptive employment placement statistics and high pressure tactics. They prey on the illusion of success, while their programs enroll anyone with a pulse and access to federal financial aid money. These schools and programs are designed to milk as much federal funding as they can out of hopeful yet naive students, leaving them financially broken husks for the rest of their lives. Many of these programs are not properly accredited, so credits most times do not transfer and the degrees awarded are virtually worthless in the job market.

Without serious regulations, for-profit colleges will still be allowed to count low-paying retail jobs as “gainfully employed” for training programs that can cost more than even an Ivy league college. These colleges exhaust the GI Bill benefits faster than any entity in existence today, leaving veterans with few alternatives once they realize they made the wrong choice.

If strong regulation like the “gainful employment” rule had already been in place, the debacle at Corinthian Colleges, another major industry player, might never have reached this point. Bad programs and schools would have been put on notice and forced to reform. Instead the big for-profit colleges have used the funneled government money to hire lobbyists that help them block reasonable regulations that would protect students and the taxpayer investment in education.

So now, like the students that have been getting tricked into massive debt, the teachers and staff will also see hardships while rich executives and hedge-fund managers deploy their golden parachute clauses allowing them to pilfer their company coffers for a last few rewards for failure. Investors don’t even win with them.

Calling these schools “diploma mills” gives them too much credit. Most students end up having to drop out after their financial aid is exhausted or they learn the truth. Call these ‘colleges’ what they really are: Debt Factories. The product they manufacture and push is the debt, pure and simple.

If implemented correctly, Obama’s regulations on for-profit colleges would in fact give the for-profit college industry incentives to charge reasonable prices and offer quality programs. That would help students, taxpayers, and our economy.