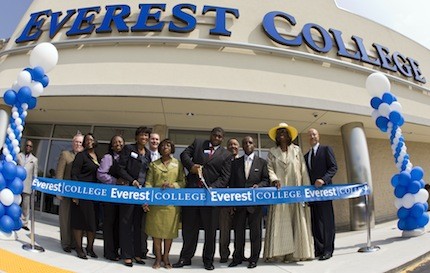 Confirming rumors that have swirled for weeks, today ECMC Group announced it has reached an agreement to acquire 56 of the 107 campuses now owned by the crumbling, discredited Corinthian Colleges for-profit chain.  A corporate filing from Corinthian says the purchase price is $24 million.  I spoke with ECMC’s CEO Dave Hawn this morning to discuss.

ECMC, a non-profit corporation with both for-profit and non-profit subsidiaries, says it will convert the 56 Everest and WyoTech campuses to nonprofit status. ECMC announced it will “transform the culture and education model at the acquired schools,” including by cutting tuition and “introducing strict accountability standards for program completion and job placement rates.”

The U.S. Department of Education must formally approve the deal, but it already basically has.  Under Secretary of Education Ted Mitchell issued a statement this morning: “We are glad that Corinthian has reached an agreement with ECMC Group and believe that this transition will allow students to maintain progress toward achieving their educational and career goals and protect taxpayers’ investment, while Corinthian moves out of the business. We are pleased to help students transition from a problematic for-profit company to a nonprofit that is committed to giving students a new start and more opportunities for success.”

I’ve written in the past about the conversions to non-profit status of two other troubled for-profit college companies, Keiser and Stevens-Henager — motivated, it seemed, by a desire to escape the stigma of a discredited industry and to avoid government regulations aimed at abuses in the for-profit sector. In those cases, insiders from the for-profit company remained in a position to profit generously from the new non-profit, and there were real concerns about abuses of the non-profit status, concerns entirely borne out by review of the IRS 990 forms filed by the successors to both Keiser and Stevens-Henager.

More recently, publicly-traded for-profit college giant Grand Canyon announced it was working to become a non-profit, in order to avoid the for-profit stigma.

The ECMC deal is different, since the schools will be under new management. But it raises its own set of concerns, which CEO Hawn, a long-time student loan executive, was keen to address with me.

ECMC has no experience operating a higher education institution. Its higher education experience is in the field of collecting unpaid student loans, and a report this year in the New York Times described ECMC’s approach to student debt collection as “ruthless.” As the Times reported, a panel of bankruptcy appeal judges in 2012 said that the agency’s collection activities  — trying to collect on a debt that had, in fact, already been paid in full — “constituted an abuse of the bankruptcy process and defiance of the court’s authority.”  The article quoted Emory Law Professor and bankruptcy expert Rafael Pardo as saying, “we should be outraged when a student-loan creditor like ECMC can use bulldog tactics to scare away someone who has a legitimate claim for relief.” A separate report by Bloomberg noted that per-debt collection commissions helped one ECMC collector make $454,000 in one year, while the then-CEO got $1.1 million and a generous benefits package.

When I asked about the allegations of abusive practices, Hawn said, “We are a highly compliant organization. We follow the rules, and I’m proud of the work that we do.” As to the company’s role in squeezing cash out of broke student debtors on behalf of the U.S. Department of Education, Hawn said “Our role is not to determine social policy.”

When I asked Hawn about ECMC’s lack of experience in running a college, the first thing he cited was the corporation’s work in education-related call center management and default prevention.  Those types of activities represent some of the shadiest components of the for-profit college world, as well as a controversial aspect of ECMC’s work, so it was a relief that Hawn otherwise talked a good game about his motivation for this transaction.

“What we want to do,” Hawn says, “is help students…. We will not rest” until the campuses have quality programs.  Hawn said ECMC knows “we have a lot of work to do.” But he said that “under the radar” the company has been “assembling a short list of qualified individuals” for management and that he was “optimistic about the caliber” of people he can hire.

When I asked why he wanted to take over this particularly troubled set of campuses, Hawn said it was “an opportunity to not just get into the education business, but to solve a major problem — these schools were going to close.  If we can help, we want to help.” Hawn says he toured Corinthian campuses, and met students, including many single mothers trying to support their families. When asked why ECMC was not buying Corinthian’s Heald chain of schools, which was considered a stronger quality group, at least until Corinthian took it over, Hawn said he wanted to “focus on the most troubled sector” to “help as many students as we can.”

But ECMC’s promises, even if kept, may not be enough to help students.  Take the company’s pledge to cut tuition by 20 percent from what Corinthian has been charging. Even with such a cut, the programs will remain way overpriced.  Everest programs are often far more expensive — sometimes by a factor of 10 or 20 — compared to local community colleges that report better job placement rates for graduates.

When I asked about the risks of getting into this business, Hawn focused on the “legal and regulatory overhang.” He said ECMC had structured the deal as a purchase of assets and thus did not see itself as the successor to Corinthian management. He said ECMC has had discussions with the many federal and state law enforcement agencies investigating Corinthian and received “sufficient comfort from most of those agencies that their investigations won’t carry over to us.”  The exception: ECMC “didn’t get sufficient comfort” from the office of the California attorney general, Kamala Harris.  Hawn added,  “I respect their position.” But ECMC decided not to buy Corinthian’s California campuses as a result.

Advocates and journalists will want to ask in the coming days whether any and all assurances provided to ECMC by other state AGs and federal agencies pose harms to students and taxpayers.

Finally, I asked Hawn about the Obama Administration’s new gainful employment rule, which will cut off aid to career education programs if they consistently leave students with insurmountable student loan debt.  Even as converted to a non-profit, some of the acquired campuses programs — for certificates, rather than degrees — would remain subject to the new regulations. Corinthian, for itself and as a member (until recently) of the industry trade group APSCU, has aggressively lobbied to block the rule, and APSCU is now suing to strike the rule down in court for a second time.  Hawn said that ECMC planned to fully comply with the gainful employment rule and would not oppose it in court or otherwise.

The contract for ECMC’s purchase of the Corinthian campuses provides that the $24 million will be divided this way: (1) $8 million put in escrow in order to secure potential indemnification obligations of Corinthian to ECMC, (2) $0.5 million put in escrow to secure potential working capital adjustment obligations of Corinthian to ECMC, (3) $12 million to the Department of Education, and (4) any remainder to Corinthian.  ECMC also will pay the Department up to $17.25 of its revenues over seven years.

I followed up the interview with an email two hours ago asking about a concern that now has been raised publicly by New America’s Ben Miller: “How is it not a conflict of interest for ECMC to own a student loan collection agency … & a college?” I asked if ECMC was planning to divest any of its defaulted loan holdings.  I haven’t heard back yet, but I hope to.

There is no conflict between ECMC’s FFEL Program guarantor line of business and the new career education line of business. The businesses are unrelated. No new FFEL Program loans have been issued since July 1, 2010—the end of the FFEL Program. ECMC’s guarantor business is winding down. The bankruptcy work that ECMC does is also FFEL Program related. Students enrolling in Everest and WyoTech would be using the Direct Loan Program, which is run by the federal government.