Are Prison Labor Companies Lobbying to Keep Prisoners in Jail for Nonviolent Offenses? 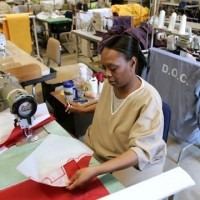 In recent months, a broad, cross-ideological coalition has pressed forward to reform mandatory minimum prison sentencing. In some cases mandatory minimum sentencing can lead to a lifetime in jail for nonviolent offenders. But a strange group has appeared on lobby disclosure forms reviewed by Republic Report. Prison labor companies are attempting to influence the bill, and they refuse to reveal what they’re doing and why.

The group is called the Correctional Vendors Association, an organization that represents companies that use prison labor to produce everything from furniture to clothing goods. CVA has spent $240,000 on lobbying over the past year, and forms show the organization is interested in shaping the outcome of the Justice Safety Valve Act, or S.619, a bill proposed Senators Patrick Leahy (D-VT) and Rand Paul (R-KY) to allow judges to impose a sentence below the mandatory minimum in many cases, including drug-related sentences.

The prison labor group, which is managed and represented by a lobbying firm called the Leonard Group, has refused to answer multiple e-mails and phone calls from Republic Report. We have attempted to reach the Leonard Group for comment since early January.

We e-mailed every major group working to pass the Justice Safety Valve Act, and no one could tell us what the Correctional Vendors Association is up to.

“I don’t know its position, and I don’t know who they’ve been lobbying,” says Molly Gill, a lobbyist for Families Against Mandatory Minimums, when asked about the efforts of the Correctional Vendors Association.

Other groups working on mandatory minimum reform were similarly puzzled. “I do not know,” says Bill Piper of the Drug Policy Alliance. “Interesting that they would be lobbying on this though.”

“I don’t, Lee, but I bet we can both guess,” replied Thomas Sussman of the American Bar Association.

In theory, prison labor companies could stand to benefit from harsh sentencing. The more prisoners in the system, the more cheap labor to produce goods for pennies on the dollar.

Federal Prison Industries Inc, a government-owned corporation that is part of the U.S. Bureau of Prisons, employs thousands of federal inmates to work at an assortment of prison factories and workshops that produces over $900 million in goods for various contractors, including military clothing. Critics have accused the system for exploiting prison labor — many earning between 12 cents and 40 cents per hour — to the detriment of American businesses and free labor.

The prison labor program has survived many challenges over the years thanks in large part to a lobbying of the Correction Vendors Association, a coalition of contractors that work with Federal Prison Industries, also known as Unicor.