Greenpeace ‘Founder’ Patrick Moore Not a Founder at All

posted at 6:29 pm by Kevin Grandia 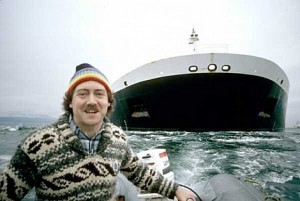 For more than 20 years now, industry lobbyist Patrick Moore has touted himself a “co-founder” and sometimes even a “founder” of the global environment group Greenpeace.

But a document making the rounds shows that Moore’s claim to be a founder or a co-founder of Greenpeace is simply not true.

A letter from 1971 shows Patrick Moore applying to take part in a Greenpeace trip and protest against nuclear testing in the Arctic ocean. A response from one of the actual co-founders of Greenpeace, Paul Cotes, on Greenpeace letterhead no less, acknowledges receipt of Moore’s interest in taking part in Greenpeace activity.

How the heck can someone apply to be part of an organization that is already founded and then claim later to have been a founder?

In many ways, Patrick Moore has built his entire reputation off this myth or, at the least, it has served Moore very well as a powerful talking point.

To be a pro-nuclear energy industry spokesperson or someone who claims there is no scientific proof that climate change is caused by human activity is one thing. In fact, there are lots of people who jump on Fox News and say the things Moore says.

But to say such things as a founder of one of the largest, most recognized environment groups in the world is what makes Moore newsworthy. And over the years Moore’s story of being a former environmentalist who has seen the error of his ways has gotten him a lot of press.

In fact, Moore even wrote a book a few years back called, “Confessions of a Greenpeace Drop Out.”

Looking at Moore’s credentials, I would suggest that if Moore had never claimed the mantle of a founder of Greenpeace, I bet he would not have gotten even an inch of column space, compared to the hundreds of articles and television appearances he has gotten over the years.

Here’s a 2004 profile in Wired magazine telling the tale of Patrick Moore’s evolution from founder of Greenpeace to a “mouthpiece” for industry.

Case in point, watch this 2012 interview with Canada’s right-wing mouthpiece Ezra Levant and you tell me if Moore’s story is at all interesting if you take out the now-proven-false claim that Moore was a founder of Greenpeace.

See what I mean? There’s just not much of a story.

Without his claim-to-fame, Patrick Moore is nothing but a guy with some opinions, and it blows my mind that he was able to keep up this myth for so long.