Obama: We’ll Protect You Against Predatory Colleges. Students: Please Do

posted at 4:43 pm by David Halperin 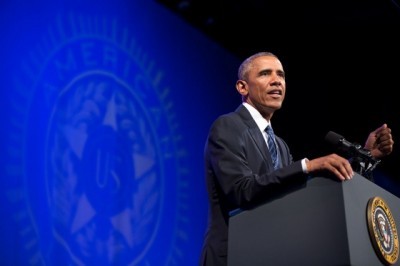 Speaking at the American Legion convention in Charlotte Tuesday, President Obama pledged, “For veterans going back to school under the Post-9/11 GI Bill, we’ll keep standing up against dishonest recruiting and predatory practices that target and prey on you and your families.”  The President has made clear that he understands the scam perpetrated by many for-profit colleges against our vets, against single mothers, against working-class young people of color — deceptive recruiting, high prices, poor quality, weak job placement.

Yet the big for-profit college companies keep spending millions to lobby aggressively against a proposed federal rule, called gainful employment, that would hold career training programs accountable for such abuses — for taking our tax dollars and consistently leaving students with debt they cannot repay. They are pressuring the White House to back down, in part by threatening a lawsuit to have a federal court nullify the rule, as a judge did in 2011 on narrow grounds.

These wealthy companies keep acting to shield such bad behavior even as more and more evidence surfaces that for-profit colleges are ripping off students.  Now that giant Corinthian Colleges, which was taking in as much as $1.4 billion a year in taxpayer dollars, is collapsing under the weight of law enforcement probes and bad student outcomes, the rest of the industry, and the industry’s paid friends in Congress, have thrown Corinthian Colleges under the bus, not offering a word in the company’s defense. They are now making the argument that their former pal Corinthian was a bad apple, but that the rest of the fruit in the orchard must be allowed to grow unimpeded. In fact, however, there are plenty of for-profit colleges still out there that seem less like apples and more like fertilizer.

There are now dozens of federal and state law enforcement investigations against some of the biggest for-profit college companies, including EDMC, ITT, Career Education Corp., DeVry, Bridgepoint, and the University of Phoenix. And every day we hear about more troubling for-profit schools and more abused students: