Regulating For-Profit Colleges: On To The Next Round

posted at 8:31 am by David Halperin 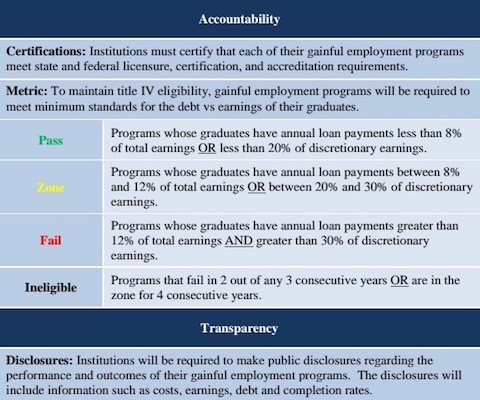 Most of the big for-profit colleges will automatically hate the new rule because, based on their outraged statements in public and private, they apparently believe their industry is entitled to a permanent flow of more than $30 billion annually in federal dollars, regardless of how poorly they are serving students. Badly-performing schools will be particularly upset that the rule is somewhat stronger than the rule issued in 2011, which their trade association, APSCU, convinced a federal judge to strike down last year.  They’ll also be mad that this time the U.S. Department of Education worked harder to include language to protect the rule from legal attacks.  Indeed, APSCU attacked the new rule last night before all the details (841 pages worth released at 7 am Friday) were even on the table. And this morning, APSCU’s intensely dramatic CEO, Steve Gunderson, thundered:

The U.S. Department of Education’s actions confirm that they engaged in a sham negotiated rulemaking process with the sole goal of reaching a predetermined conclusion that will result in eliminating higher education access and opportunity for millions of students based on the type of institution they attend.  The Department has never been interested in constructive input or ensuring that student access is protected. As a result, millions of new traditional students will lose access to postsecondary education and hundreds of thousands of dollars in lifetime earning potential.

But advocates for students will argue that a stronger rule is more than warranted, given that media and government investigations since the 2011 rule was issued, including a comprehensive report by Senator Tom Harkin (D-IA), have revealed industry abuses to be even more widespread and egregious than previously known. Advocates are disappointed that the rule represents a weakening of the last draft of the rule floated by the Department of Education last December, which in turn was a weaker draft than the one the Department circulated a few weeks earlier. The new rule would allow many bad programs to continue deceiving, enrolling, and abusing students for years to come, even as federal and state law enforcement agencies have charged that many of the major for-profit colleges have been engaged in serious fraud and other misconduct.

There are some positive changes in the new rule, including some protections against programs that promise students particular careers but in truth lack the formal programmatic accreditation that would actually allow graduates to enter those fields, and limited, though insufficient, protections for lower priced schools, such as community colleges, where very few students need student loans.

But, notably, the new rule’s debt-to-earnings tests — which would remove eligibility for programs whose graduates have student loan levels that are high in comparison to their paychecks — were further weakened from the previous draft in terms of implementing details, and they were already so weak that thousands of programs with debt levels greater than their graduates’ entire discretionary incomes would continue to get taxpayer money.  The new rule also has dropped from the previous draft any provision for debt relief for students harmed by programs that lose eligibility for federal aid; the Department now says that debt relief issues are too complex to address now, and has asked for further comments from the public.

Nor does the new rule address other important concerns raised in a letter sent last month from the coalition of more than 50 student, veteran, civil rights, consumer, labor, and education policy groups urging greater protections. In particular, there is no loan repayment rate or another measure that would effectively penalize programs with high dropout rates as well as high debt. (If you’re trying to decode the endless document containing the rule, your best guide is New America’s Ben Miller.)

The Administration has accompanied this somewhat mild rule with a press release containing some of its toughest rhetoric yet about the abuses of predatory for-profit colleges. But that language is long overdue, given that the person for whom all these White House and Education Department officials work, President Obama, has made not one, but two, even stronger statements detailing the abuses in this industry.

With heavy lobbying and campaign contributions paid for by our tax dollars, the for-profit colleges have acquired many willing supplicants on Capitol Hill in both parties, and these public servants keep warning the Obama Administration that a strong gainful employment rule would be an overreach and could risk being overturned by Congress.  But even these industry friends, both Republicans and Democrats, seem increasingly reluctant to be seen defending the interests of predatory companies over the constituents — veterans, single mothers, and others struggling to get ahead — that these companies deceive and injure every day.

The Administration should have taken stronger action, because students and prospective students across the country deserve greater protections.

For-profit colleges now have 13 percent of all U.S. college students, but  47 percent of all student loan defaults. Many of these schools get nearly 90 percent of their revenue from taxpayer dollars.  Some of them actually cost so much that the real price for students on financial aid can be twice that of Harvard or Stanford. Yet their students often end up unemployed, or back at their old jobs at Office Depot, but now with backbreaking debt.

Former for-profit college students are at the leading edge of a student debt crisis that has reached $1.2 trillion. It’s a situation with some disturbing similarities to the nationwide subprime mortgage crisis that help trigger the 2008 Wall Street collapse. People with overwhelming student debt can’t afford to buy houses, buy cars, get married, take vacations, or do many of the other things that help drive our economy. Some can’t even afford to pay rent or feed their families.

Despite the growing evidence of these harms, there is every indication that the indignant, entitled for-profit college industry will keep using its riches to buy expensive lobbyists, lawyers, and spinners and seek to block all rational accountability measures. Share prices of the big for-profit colleges, which have been in a downward spiral for several years, may rise some this morning because, despite Gunderson’s end-of-the-world prediction, the new rule would allow many bad programs to survive.  But long-term this industry is in a heap of trouble, and it should be.  I remain hopeful that the new gainful employment rule, the law enforcement investigations underway by the Justice Department, FTC, CFPB, and SEC, and state attorneys general, media investigations, and the tireless activism of former students and others, will eventually force the bad actors to dramatically reform, or else shut down.

Interested parties have sixty days to submit comments on the new rule, and lord knows they will.  Then the Department and the White House will likely tweak the rule yet again before releasing a “final” version, perhaps in the fall.  The regulation would actually take effect next summer, and sanctions for failing schools would begin in 2016.  Meanwhile APSCU will undoubtedly be preparing a lawsuit to strike down the rule yet again, a case that could spend years in the federal courts.  And if Mitt Romney or someone like him gets elected, the rule could be repealed right quick.

So it ain’t over yet, by any means. But if you spend time, as I do, with students who are $100,000 in debt and out of work, and with current and former for-profit colleges staffers tormented by the cynical, abusive culture they’ve been part of, you will know that the truth is on the side of reform, and that it’s worth seeing this struggle through to a positive conclusion.