posted at 6:19 pm by David Halperin 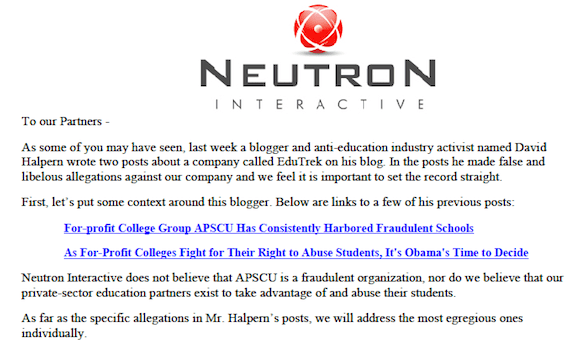 While one for-profit college in Miami, called FastTrain, has just been sued by law enforcement for, among other things, allegedly hiring scantily-clad women to lure men to its admissions office (an allegation noted by Republic Report back in May 2012), another group of operators in Salt Lake City has been using a different scam — phony bait-and-switch websites — to entice low-income Americans into high-priced, poor-quality career college programs. Republic Report has been exposing these operations for the past few weeks, and one of the companies named is now responding.

Republic Report has obtained a letter from Neutron Interactive CEO Dan Caffee, addressed to partner businesses, claiming that allegations in some of my articles about his company are “false and libelous.” He added, “We are pursuing all available legal avenues to address the allegations in this blog.” But the letter is just another deceptive act from a deceptive marketer.

I have reported, based on the specific and consistent accounts of multiple former employees of Salt Lake City-based Neutron, as well as ex-employees of another SLC company, EduTrek / EdSoup, that Neutron set up websites that promised jobs, when in fact the sites’ real purpose was to trick job seekers into giving their contact information so representatives of for-profit colleges could seek to sell them career training programs. I  also reported that Neutron attracted visitors to its phony sites by placing ads for non-existent jobs on legitimate job sites like Monster.com.

In the letter, Caffee flatly asserts, “Neutron does not generate education leads on employment or career-based sites. We have always been very clear with our clients that all of our web leads are generated on one of two sites: CollegeOverview.com or FindAnyCollege.com.”

I have gone back to former employees of both Neutron and EdSoup, and they have reaffirmed for me emphatically that Neutron has indeed for years sold the “leads,” or names and contact information, of people visiting its employment sites to companies peddling education programs. Documentation they shared with me backs up the claims of these former employees.

Caffee’s story also minimizes the company’s relationship with the EdSoup / Edutrek boiler room-style call center: “Neutron has no current relationship with EduTrek or its affiliated companies. Earlier this year Neutron ran a small data campaign to Edutrek, the relationship was terminated several months ago.” But former EdSoup employees who worked at the company over the past four years told me — and showed me multiple documents indicating —  that many of its leads came from Neutron, and Neutron employees confirm that.

As several former Neutron employees noticed, Caffee’s central denials are written in the present tense. Perhaps that’s to obscure that the transgressions I described took place in the recent past. Because they clearly did take place.

It also appears that Caffee wrote his letter before I published my most recent article, which relied on interviews with and documents obtained from his own former Neutron employees (whereas my previous articles only quoted former EdSoup employees).

Yes, Neutron derived leads from its job sites and sold them to college marketers

John Genna was Neutron Interactive’s vice president of marketing from August 2011 until March 2012. Genna was the anonymous Neutron manager whom I quoted in my last article. He also was the executive whom I described in that story as having been directed by Caffee to fire a dozen employees on a single day — and then at the end of that day was fired by Caffee. Genna has decided to be anonymous no more, and he spoke with me further this week.  He said he was inspired to allow me to reveal his identity by the principled example of one of the workers he hired at Neutron, programmer Jason Gill, who agreed from the start that I could use his name.  “I brought Jason to the company with the thought that I was gonna do something good,” said Genna — to build a legitimate marketing operation. “I saw that he graciously spoke up [to Republic Report], and I thought I owed him.”

Genna told me that during his term there, Neutron would post “thousands of fake jobs” on the legitimate jobs sites CareerBuilder and Indeed.com. Those links would lead to Neutron job sites that had three “radio buttons” for visitors to select from when they provided contact information: The visitor could declare (1) I am a medical technician; or (2) I am training to be a medical technician; or (3) I want more information about training to become a medical technician. If a visitor clicked the third button, she was sent on to Neutron’s College Overview site, and then her lead was sold directly to one of Neutron’s client for-profit college companies, which included the University of Phoenix, EDMC, Corinthian, Bridgepoint, Kaplan, ITT, and Daymar. In that sense, Caffee might be able to assert that the lead was actually “generated” by the College Overview site, Genna says, but Caffee’s letter is “splitting hairs” because “Neutron generated the traffic from its career sites.” The former Neutron tech employee quoted in my previous article told me, “College Overview was the face of it – but was hardly every worked on. It was always just a good face to put forward.”

But the lie is bigger than that. Because, in addition, Genna says, if the visitor clicked on one of the other two radio buttons on the Neutron job sites, Neutron would instead often sell their information not to a for-profit college directly but to a third-party call center — like EduTrek / EdSoup — which was also pitching for-profit colleges, and those call centers would in turn pass leads on to the colleges themselves. Genna gave me a list of 24 such education call centers to which Neutron sold its leads. Genna shared with me documents listing the number of leads that Neutron sold to EduTrek — 28,796 in November 2011; 20,645 in December; 15,628 in January 2012. He also told me that Caffee and his co-founder Shaun Ritchie personally visited the EdSoup call center, locating just ten blocks from Neutron, on multiple occasions.

Jack Suenram, a 2010-2014 EdSoup employee who already spoke with me at length for previous stories, says, “I called those [Neutron job site] localemploymentnetwork leads” as well as leads from other Neutron job sites. “Those leads are tagged with the word ‘Neutron’ in EdSoup’s own data base, thousands of them.” Suenram sent me documents confirming that. He adds, “Those college sites [Caffee] refers to wouldn’t produce but a microscopic trickle of leads.” The “overwhelming majority” of people Suenram called off the Neutron leads, said, “in angry terms, I’m looking for a job, not education.”

Genna said the for-profit colleges that bought Neutron leads directly reported “thousands” of job seekers who complained. Even if they clicked a box expressing interest in “training,” many did not expect to be called to buy two years of expensive for-profit college tuition — prices for these programs can be as much as $80,000. Genna says there were a few for-profit colleges — such as Utah-based Eagle Gate and Provo — that refused to buy leads from Neutron, but most of the big schools kept buying them.

But Genna says Neutron was highly motivated to sell the leads directly to the colleges because, during his time there, the schools were paying Neutron $30 to $80 for each lead, whereas a call center like EdSoup paid about 87 cents.

Genna also says that Neutron did try to generate direct traffic to its College Overview lead generation site — the one that actually indicated it was a place to find college programs — through “actual marketing”: emails, search engine optimization, etc. But that was a failure. (According to Genna, Neutron also sold leads from its job sites to other companies, selling insurance, for example, but the revenue was small (maybe $100,000 a month) compared with lucrative sales to college marketers.)

It’s also clear that many Neutron-created job websites like localemploymentnetwork and others I described in my articles, as those sites were configured when I published last month, did not include the radio buttons that Genna described but instead asked visitors for their contact information and disclosed to all in vague small print that, by clicking, visitors consented to be contacted “regarding education details” — and that people who provided their info got called by EdSoup and other call center marketers selling for-profit colleges.

Genna gave me more details of Neutron’s abuse of legitimate job sites like CareerBuilder. Caffee had urgent “fire drills” whenever CareerBuilder detected that Neutron was posting fake job listings and kicked the linked Neutron sites off.  Caffee would respond by directing Neutron employees to quickly build new landing pages to link from yet more fake listings posted on CareerBuilder. Once, just as Genna arrived in Las Vegas for a family activity, Caffee called and summoned him, and Genna was on the next flight back to Salt Lake to oversee the building of more job sites to replace those barred by CareerBuilder.

Genna says that Neutron’s director of business development would repeatedly tell Caffee, You’ve got to clean this up; I can’t approach people knowing this is how you generate leads.

Yet another former Neutron employee, with whom I spoke for the first time yesterday, says that Caffee “would do the best he could to mask the origins of the leads to his customers.”

This former employee reports that Neutron, in 2013, tried setting up its own call center, but it didn’t work. Neutron got a taste of its own medicine when it tried selling colleges to live people from its own sketchy leads. “The leads wouldn’t convert,” said this employee, who listened to Neutron employees interact on the phone with people who were, once again, looking for jobs, not college.  So Neutron, says this employee, went back to focusing on selling its leads to EduTrek.

This employee says he quit because he felt Neutron Interactive ran on “unscrupulous” and “dishonest” practices.

Caffee’s letter also denies two claims that my articles in fact never make — first, that Neutron is behind for-profit college lead generation websites that purport to offer food stamps, Medicaid, and other assistance; as I reported, other companies seem to be running those; and second, that Neutron is connected to scams offering Target and Best Buy gift cards; I connected that scam to EdSoup, but not to Neutron.

So I stand by my story in all respects.

I have repeatedly sought comment from Caffee and his co-founder, Shaun Ritchie, including after reading Caffee’s letter, and they have not responded. In the days following my initial stories, Caffee was reportedly huddling in his office with lawyers from a big national law firm with a prominent Salt Lake City office.

My articles also have highlighted Neutron’s continued membership in APSCU, the powerful trade association that represents many of the industry’s biggest companies and leads the fight against any meaningful standard to protect students from predatory colleges. Caffee’s letter responds with high praise of his group: “Neutron Interactive does not believe that APSCU is a fraudulent organization.”

Meanwhile Caffee was granting an interview to a Forbes freelancer describing how well he treats his employees: “We provide the best work environment possible. We offer standing desks, a mini working gym on site, loads of snacks, and a very open work concept…” A Neutron staff member previously told me, “Neutron was like [the movie] ‘Fight Club’ — you don’t talk about Fight Club. They spoil you — catered lunch every day, free snacks, everyone got an iPhone and an iPad right away. We will spoil you, and you don’t question.”