Democrats and the Obama Administration

President Obama came into office pledging to tackle climate change and to “close the revolving door” between lobbyists and government. But as the LNGdebate has unfolded, the administration has broken both promises.

The most telling example is Heather Zichal, former Deputy Assistant to the President for Energy and Climate Change, who announced her intention to leave the White House in October 2013. Within months of her departure from public office, Zichal — a key environmental policy staff member to John Kerry when he served in the U.S. Senate — accepted an invitation to join the board of Cheniere Energy. In April 2012, Cheniere had become the first company to win a permit from the Obama Administration to export LNG, an effort that entailed the aid of numerous lobbyists with career ties to the Department of Energy.

White House meeting logs reveal that Zichal met several times with Cheniere lobbyists and executives while working for the Obama Administration. Now, Zichal earns $180,000 annually from the company, not including stock options. 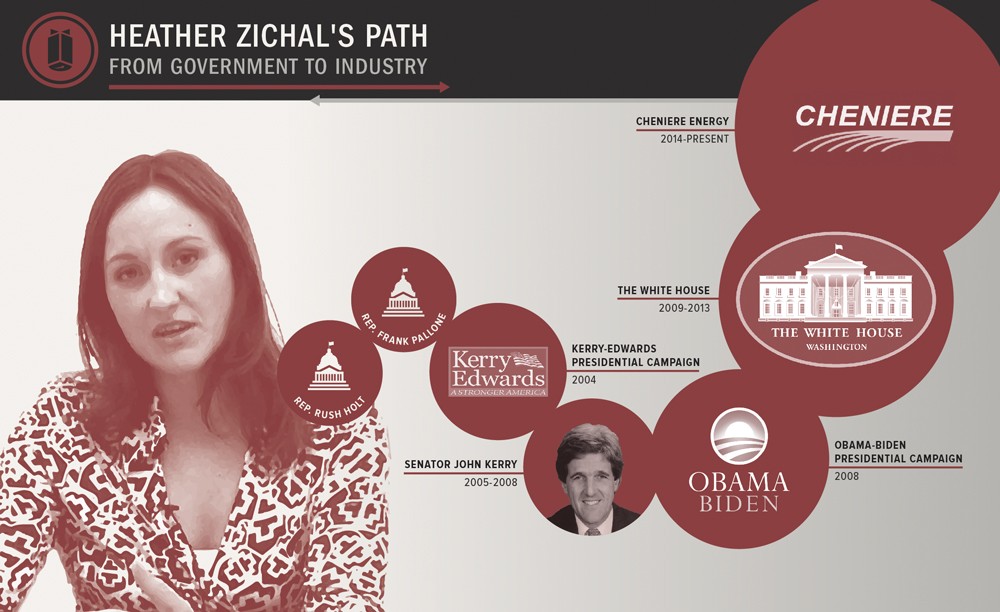 Another person who moved from a Democratic Party policy role to become a Cheniere lobbyist is Ankit Desai, now vice president of government relations for Cheniere. Desai previously worked as political director for then-U.S. Senator Joseph Biden and as budget director for the 2004 John Kerry for President campaign. John Deutch, former director of the U.S. Central Intelligence Agency under President Bill Clinton, now serves on the Board of Directors of Cheniere. Deutch sits on the U.S.Secretary of Energy Advisory Board (SEAB) and also works as a professor at the Massachusetts Institute for Technology (MIT). Energy Secretary Ernest Moniz and Deutch formerly were colleagues at MIT. Deutch obtained a legal waiver to serve on the SEAB in September 2013 from the DOE in consultation with the U.S. Office of Government Ethics.

“The expertise you have gained through your past and current positions will be an invaluable asset to SEAB as it addresses issues of national significance,” wrote then-Deputy Secretary of Energy, Daniel Poneman, a former attorney and principal at the corporate-funded Scowcroft Group, in the memo. “As such, I find the need for your services outweighs the potential for a conflict of interest created by your financial interests.”

In all, Cheniere Energy has hired 23 lobbyists as of the third quarter of 2014 either in-house or on a contractual basis, to peddle influence inside the Beltway. This cost the company $810,000 during quarter three of 2014. While no small price, it’s just a tiny sliver of what Cheniere paid its CEO, Charif Souki, in fiscal year 2013: $142 million, the highest pay rate for a CEO in corporate America.

To understand the tight grip Cheniere has on the Obama White House, though, one has to look beyond lobbyists and the Board of Directors and follow the money trail.

Tony James hosted a $35,800-a-head fundraising dinner for Obama in May 2012, in which the president garnered $2 million for his race against another private equity tycoon, Mitt Romney. James bundled $331,350 for Obama’s 2012 president race, and in March 2014, he hosted a $32,400 per person fundraiser on behalf of the Democratic Senatorial Campaign Committee, a party attended by Obama.

The revolving door has moved in both directions. Energy Secretary Moniz, a former consultant to BP, previously led the MIT Energy Initiative, which received over $145 million from the oil and gas industry.

At MIT, Moniz also obtained funds from a nonprofit associated with Chesapeake Energy, a leading fracking firm, to chair a report on the “Future of Natural Gas” during a period of his career that DeSmogBlog and other critics have called “frackademia.” Former CIAdirector and current Cheniere board member John Deutch also served on the study group that prepared that report while a colleague of Moniz’s at MIT, as did Melanie Kenderdine, director of the Office of Energy Policy and Systems Analysis and Energy Counselor to Moniz. Moniz also formerly served on the board of directors of ICF International, a consulting firm that services the oil and gas industry.

Other officials within the Department of Energy have similar ties. Christopher A. Smith, the Principal Deputy Assistant Secretary for Fossil Energy — the official who leads the branch charged with reviewing LNG export applications — was appointed in 2009 after an extensive career working for Chevron’s natural gas trading unit. Paula Gant, the Deputy Assistant Secretary for Oil and Natural Gas — another official with influence over the LNGpermitting process — was appointed last year after working as the vice president of the American Gas Association (AGA). AGA is a lobbying group in Washington now headed by former Democratic Congressman Dave McCurdyof Oklahoma.

Bill Richardson, former U.S. Secretary of Energy and Governor of New Mexico — and an outspoken advocate forLNG exports — also has passed through the revolving door. Richardson sits on the Board of Directors of Miller Energy Resources, Inc., an oil and gas exploration and production company that owns more than 46,000 acres in the Mississippi Lime shale basin. He often appears in the media without disclosing his industry connections, trading on past titles and accolades in government.

For regulators currently charged with assessing the merits of LNG export applications, not only are LNG-aligned interests now supervising them, but an army of ex-regulators now lobby them. David Leiter, a former Deputy Assistant Secretary of Energy, and chief of staff to former Senator John Kerry, represented Sempra Energy as the firm sought to win approval for its Cameron LNG export terminal. Sempra received the permit in June 2014 from FERC, becoming the second LNG export project approved by the Administration.

–Tom Lawler, former legislative assistant for Sen. Tom Carper (D-DE), who serves as chairman of the Subcommittee on Transportation and Infrastructure, a sub-unit of the influential Senate Environment and Public        Works Committee. He owns his own lobbying firm, Lawler Strategies, LLC

Natural gas interests and the LNG lobby have in fact gone on a hiring spree targeting Democratic officials and those close to the administration.

In May 2014, Burisma Holdings — a Ukrainian gas producer with shale gas basin assets— announced the hiring of Hunter Biden, the son of Vice President Biden. This announcement came just weeks after the Vice President made a trip to Ukraine touting domestic gas production and fracking as a solution to wean the country off of Russian gas.

For Democrats contemplating a presidential run in 2016, the gas industry has maneuvered to secure access and curry favor. Maryland Governor Martin O’Malley’s new non-profit — the NewDeal coalition — receives funding from ANGA and held one of its meetings at the ANGA’s offices in downtown DC earlier this year.

Further, the State Department under then-Secretary of State Hillary Clinton worked with energy companies to serve as a missionary force promoting natural gas and fracking overseas as part of the Global Shale Gas Initiative, now known as the Unconventional Gas Technical Engagement Program. That initiative was overseen by David L. Goldwyn who has since left the State Department to run his own energy consulting firm, Goldwyn Global Strategies, LLC. Goldwyn also serves as an affiliated expert with the industry-supported think tanks the Atlantic Council and the Brookings Institution, where he promotes both oil and LNG exports.

Goldwyn also works as an attorney at the law firm Sutherland Asbill & Brennan LLP. Though a list of Goldwyn’s clients is not publicly available, Sutherland has served as counsel for at least three companies applying to export LNG to the global market: Carib Energy, Wentworth Gas Marketing LLC and Magnolia LNG. For the Carib and Wentworth applications, Michael Stosser, a man who started his career as assistant general counsel for rule-making and environmental law at FERC, is listed as counsel. Perhaps it is no surprise, then, that Sutherland counsels industry clients on how policy will be made byFERC in the sphere of LNG exports.

At a September 2014 forum hosted by Brookings, Goldwyn advocated for lifting the U.S.oil export ban. Goldwyn was presented as a Brookings Fellow, with no mention of any clients he represents in the oil and gas industries. In response to a query from The Washington Post as to why that happened, Charles Ebinger, who heads the Brookings energy program, told The Post, “David is so well known we thought everybody knew he had the industry contacts.”

READ THE NEXT SECTION: OUR ENERGY MOMENT