Conclusion: Lobbying Heats Up. So Does the Planet.

“The ability to turn the tables and put the Russian leader in check lies right beneath our feet, in the form of vast supplies of natural energy,” Speaker of the House John Boehner wrote in a Wall Street Journal opinion piece in March, speaking of Vladimir Putin. 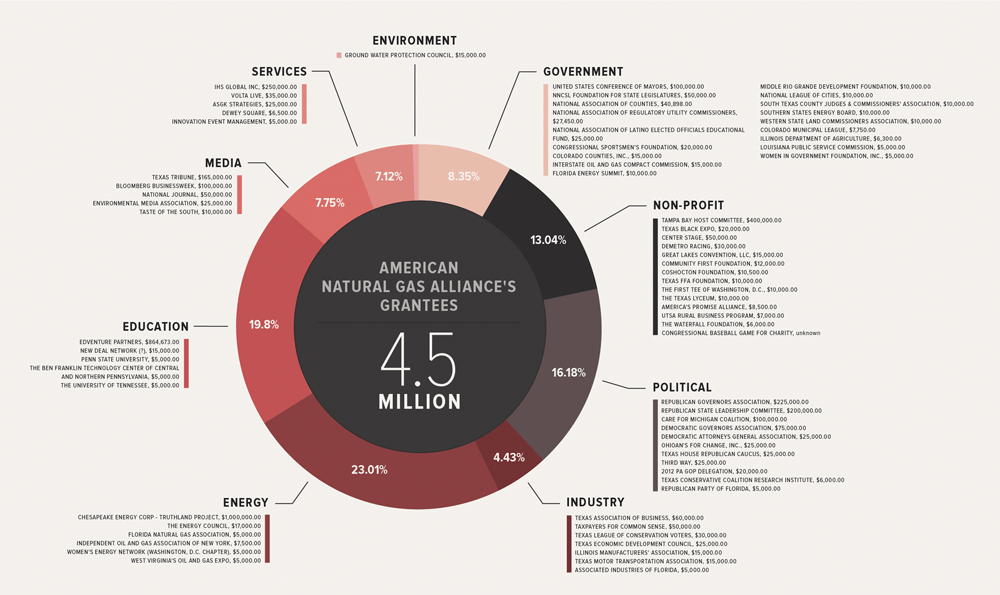 As a crisis unfolded in Ukraine, the Russian government attempted to pressure European nations by threatening to cut off natural gas pipelines. The threat served as a flash point between U.S.-Russia relations, but also served as an opportunity for the LNG lobby to extract new policy demands.

Within days of these developments, LNG lobbyists flooded the media and Capitol Hill, demanding that the U.S.streamline more LNG exports to relieve Europe from its dependence on Russian gas.

“We didn’t gin up the Ukrainian crisis. We didn’t gin up the idea that it ought to be connected in some way to LNGexports. But Congress did, obviously, and a lot of editorials, experts and geopolitical analysts have all jumped on that. We appreciate the attention that LNGexports are receiving, and if it does provide a catalyst to make something happen that heretofore has not, then we’re going to be very happy with that,” Bill Cooper — president and registered lobbyist of the Center for Liquefied Natural Gas, an LNG industry lobbying organ —said at a March congressional hearing.

Cooper also passed through the revolving door to get to where he is today. He formerly worked as a congressional staffer, serving as counsel for the House Energy and Commerce Committee before leaving to work as a lobbyist for the American Petroleum Institute (API) and then moving to the Center for LNG. API registered the Center’s website domain, and a trade press article in Downstream Todayalso refers to “the Center for LNG established by the American Petroleum Institute to enhance public education and understanding about LNG.”

Before leaving to work for the LNG export industry, Cooper proved instrumental in the passage of the Energy Policy Act of 2005, according to a September 2005 newsletter published by the Interstate Oil and Gas Compact Commission (IOGCC).

Lost in this discussion is the viability of U.S. LNG exports to do anything to resolve European reliance on Russia for natural gas.

According to Edward Chow, a former Chevron executive, much of the gas from U.S. LNGexports will go to Asia where natural gas prices are much higher than in Europe —though certainly not all of it. Moreover, Europe lacks the import terminals necessary for processing LNG, a problem compounded by the fact that constructing U.S. LNG export terminals will take several years. “Folks who were in favor of accelerating liquefied natural gas exports anyway have seized upon the Ukraine crisis as yet another argument for why we should be doing it,” Chow told Mother Jones. Not only has it seized the opportunity to use the crisis in Ukraine to further their cause, but the LNG industry has also succeeded in winning support on both sides of the aisle along the way. Unfortunately, as lobbying and influence peddling heats up in Washington and elsewhere, so too does the planet. Relentless fracking and opening the export floodgates with U.S.-harvested shale gas can only make the planet hotter still. The LNG export lobbying machine, as this report demonstrates, is well mobilized and well organized – and highly dependent on operatives moving through the government-lobbying revolving door. What remains to be seen is whether this juggernaut will advance unimpeded, or whether voices for environmental protection and lower U.S. energy prices will eventually force a real debate.