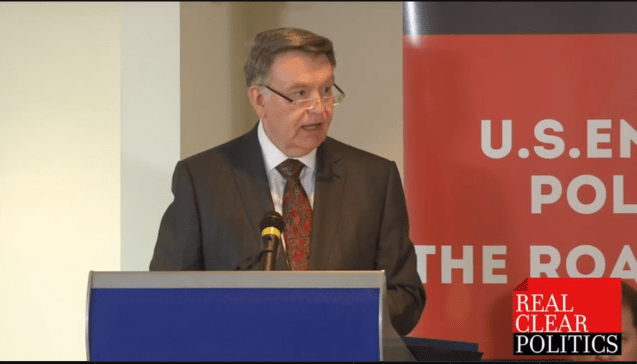 Last week, the political news website Real Clear Politics hosted a Washington DC event (video) targeted at an elite media and policy audience. Held at the gleaming Newseum, site of many such events, it was entitled, “U.S. Energy Policy: The Road Ahead,” and appeared to be a genuine policy discussion. It was, in fact, an infomercial.

The event was sponsored by the American Coalition for Clean Coal Electricity (ACCCE), a major trade organization for the U.S. coal industry. ACCCE was paying to have an energy discussion before journalists and policymakers – and for the opportunity to have ACCCE’s CEO Mike Duncan lead off the program with remarks arguing that coal remains essential to the U.S. economy. Duncan, who is a former head of the Republican National Committee and cofounder of the Karl Rove super PAC American Crossroads, candidly called his opening remarks a “paid commercial” and asked the audience to respect his purchase by quieting down to listen carefully.  But in fact the whole event, not just Duncan’s remarks, was tilted by ACCCE money.

The moderator, Real Clear Politics’ Carl Cannon, admitted that the one panelist skeptical of the energy industry, Peter Ogden, was outnumbered.  Ogden is a senior fellow at the Center for American Progress (where I used to work) and a former Obama White House and State Department official. The other speakers were all enthusiastic backers of the energy industries — Ross E. Eisenberg, vice president of energy and resources policy at the National Association of Manufacturers; Dan Kish of the Institute for Energy Research and William Yeatman of the Competitive Enterprise Institute, both think tanks backed by energy companies and conservative foundations; and Senator Joe Manchin, Democrat from coal-dominated West Virginia.

While Real Clear Politics itself clearly leans to the right, an almost identical event was sponsored over the summer by a publication that always claims that it is scrupulously fair and unbiased, but in fact sometimes seems to rent out its reputation to industries seeking to influence Washington — Politico. (Recently, Washington Post columnist Erik Wemple has accused Politico reporter Mike Allen of giving favorable coverage in his Playbook column to corporate interests that advertise there.)

On a day last July when Washington DC neighborhoods sweltered in oppressive, 96-degree heat, air conditioned vehicles pulled up to the well-cooled Newseum for a Politico hosted- and ACCCE-sponsored event entitled “Future of Energy Briefing – What’s Next for 2013” (video). The general public wasn’t invited; the event location wasn’t even included on the Politico website. The only people welcome were paying Politico customers and invited guests, most notably the event’s real target audience: news reporters and other opinion-shapers.

A top White House environment / energy official, Heather Zichal, appeared on the program, interviewed by a Politico reporter. After that, there was a panel discussion, featuring Congressman John Garamendi, Democrat of California, a supporter of efforts to combat climate change, and Republican Senator John Barrasso of Wyoming, one of the most aggressive advocates for the coal industry. Barrasso’s state is more dependent on the industry than any other; it produces about 40 percent of all U.S. coal. Two weeks earlier, Barrasso had attacked President Obama’s “war on coal…. a war on American jobs, American manufacturing and on American families looking for affordable energy.”

The panel’s third speaker appeared, on the surface, to be poised to balance the discussion – Margot Anderson, Executive Director of the Energy Project at the Bipartisan Policy Center (BPC). The BPC presents itself as a think tank offering sensible bipartisan positions. But the group receives contributions from a wide range of business interests, and quite often its policy prescriptions seem tilted toward those supporters. Anderson’s energy project is chaired by two former Senators, Trent Lott and Byron Dorgan, who are both now lobbyists for energy companies, and its February 2013 report read like a wish list for the energy industry. With respect to coal, the BPC report did not warn of coal’s heavy contribution to global warming, or call for new regulations on power plants; it only called for accelerated government efforts to develop so-called “clean coal,” or carbon capture and storage (CCS) technologies, a multi-billion dollar federal project that has produced very little over 15 years. Among the BPC’s donors are coal-dependent energy companies like Entergy and Southern Company.

Similarly, at the 2012 Democratic National Convention in Charlotte, energy conglomerate Southern Company, whose assets include coal plants, paid for an energy policy event hosted by The National Journal / Atlantic Magazine, another regular participant in the pay-to-play field.

The coal industry’s buying of these events is part of what the National Journal recently described as a “new public-relations and lobbying blitz” aimed at shoring up political support as it faces perhaps its greatest challenge. Over the summer President Obama gave a speech at Georgetown University, where he pledged to make progress in the fight against global warming. Obama proposed new rules to curb carbon emissions from existing power plants, rules that could imperil the coal industry. Coal, while supplying much of America’s power for decades, has also caused immense environmental destruction and is a leading driver of global warming. The threat to coal’s survival comes not only from government’s seeking to curb toxic pollution but also from the rapid growth of natural gas and renewable energy sources.

Coal’s perennial strategy has been to deny the harms caused by the industry, a steady deception that is reflected in recent pronouncements by coal industry officials – despite the overwhelming scientific evidence – that the burning of coal and other fossil fuels is not causing global warming. Coal also spins fantasies about the promise of “Clean Coal,” and carbon sequestration, promises that they know cannot be kept, but that they believe will buy them time.

Still, the industry keeps fighting, with an eye on influencing key 2014 races, including through the practice, now common among wealthy industries, of buying, and slanting, policy events hosted by media companies, who are eager to rent their reputations for cash.