posted at 4:17 pm by David Halperin 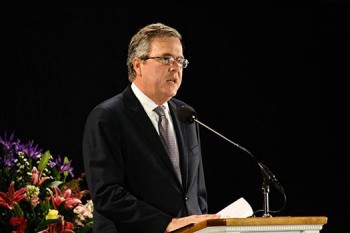 Former Florida Governor Jeb Bush (R) will be the keynote speaker at the Las Vegas annual convention of the trade association of for-profit colleges, APSCU, according to the group’s website.  Although some reputable, responsible colleges are members of APSCU, the organization is dominated by large companies, many of which — Corinthian, ITT, Education Management Corp., Kaplan, Career Education Corp., DeVry — are now under investigation by federal law enforcement agencies, state attorneys general, or both. Pending lawsuits brought by government authorities charge that big for-profit colleges have engaged in deceptive advertising; coercive boiler room recruiting targeted at veterans, single mothers, and others; misrepresentations about programs costs and job placement; student loan fraud; and other misconduct.

President Obama has said that some for-profit colleges are “trying to swindle and hoodwink” students, because they only “care about the cash.” Their students, the President has said, “can’t find a job. They default…. Their credit is ruined, and the for-profit institution is making out like a bandit.” Acting to protect the bad behavior of such companies, APSCU has led the charge to block President Obama’s proposed “gainful employment” rule, which would cut off federal aid to career college programs that, because of a toxic combination of high prices and low quality, consistently leave their students with insurmountable student loan debt.

As Bush weighs a run for the White House in 2016, he may be attracted to the immense wealth of the for-profit college industry, which has been receiving more than $33 billion a year from federal taxpayer money, and uses a good chunk of that money to make campaign contributions and buy the allegiance of politicians in Washington. Although the industry provides plenty of cash to Capitol Hill Democrats, it is closely aligned with the Republican Party, and in 2012 it bet big on Mitt Romney, who praised for-profit colleges on the campaign trail and turned out himself to be an investor in the industry.

But as the public becomes increasingly aware that for-profit colleges have been ripping off taxpayers and ruining students’ lives, there are risks of keynoting the APSCU conference.  In 2012, Michelle Rhee took some heat — and not just from me — for speaking. The other keynote that year, Jeb Bush’s brother, former President George W. Bush, is well-remembered by the for-profit college industry because his Administration relaxed the rules governing them, but at the convention Bush stressed his commitment to accountability for K-12 schools receiving federal money, an applause line that got no applause among the for-profit college barons in attendance, since their lobbying is focused precisely on avoiding accountability.

In 2013, APSCU announced its keynote would be Admiral Mike Mullen, former chairman of the Joint Chiefs of Staff and boasted that Mullen’s appearance at the convention would “be a truly extraordinary moment for private sector education, bringing increased visibility and respect to the sector.” For reasons unknown, Mullen cancelled. (I had written an article questioning his decision to appear, given the well-documented abuses and deception of veterans by many players in the for-profit college industry.)  APSCU then found a willing replacement for Mullen — former presidential candidate General Wesley Clark.

But although those speakers addressed a for-profit college industry whose abuses were already well-known, the  industry’s reputation is even worse now, as the federal Consumer Financial Protection Bureau, Securities and Exchange Commission, Federal Trade Commission, Justice Department, and Department of Education have launched investigations or filed lawsuits against APSCU members, and more than 30 state attorneys general are collaborating on major probes of the industry. The Attorney General from Bush’s home state of Florida, Pam Bondi, a Republican, is investigating APSCU members Career Education Corp., Corinthian, Education Management Corp., and Kaplan, as well as the University of Phoenix / Apollo Group. Prospective students and investors have been getting the message, and enrollments and share prices have plummeted.

But rather than commit to serious reforms, the industry continues to focus on its biggest strength: lobbying and buying influence with politicians.  Joining Jeb Bush as an APSCU speaker this year is former Senator Bob Kerrey (D-NE), who has financial ties to the industry.

Bush has made K-12 education “reform” a central component of his policy agenda, with a focus on privatization — charter schools and vouchers.  While APSCU’s name — which stands for Association of Private Sector Colleges and Universities — stresses the free market image it wants to project, the biggest for-profit colleges receive about 86 percent of their revenue from taxpayer dollars.