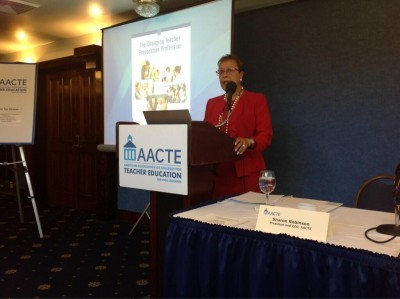 Sharon P. Robinson, the president and chief executive officer of the non-profit American Association of Colleges for Teacher Education (AACTE) has served, since January 2011, on the board of directors of Corinthian Colleges, a publicly-traded corporation that runs the for-profit colleges Everest, Heald, and WyoTech. While Robinson’s organization advocates for strong professional teacher education, Corinthian has a record of poor quality education programs, sold to students through deceptive recruiting, and the company is now under investigation by more than a dozen state attorneys general and at least four federal law enforcement agencies.

Corinthian College board members generally receive $60,000 per year in cash plus $90,000 in deferred stock. As a member of the board’s compensation committee, Robinson is entitled to an additional $10,000 per year, bringing her Corinthian compensation to $160,000. She earned $340,000 from her job at AACTE in 2012, the most recent reported year.

Robinson joined the Corinthian board in January 2011, at a time when the for-profit college industry was lobbying Congress and the White House intensely for the Obama Administration to weaken its proposed “gainful employment” rule, aimed at cutting off federal aid to career education programs that consistently leave students with insurmountable debt. The industry has used a chunk of the $33 billion it receives each year from taxpayers to buy influential endorsers, and the presence of a well-credentialed education leader like Robinson on the Corinthian board could have been a useful selling point for industry lobbyists. The Administration did end up issuing, in June 2011, a substantially weaker rule than was contained in its previous proposals. (The for-profit colleges then managed to get a federal judge to strike down the rule, forcing the Administration to start over, which is why the fight over gainful employment is now again in full swing.)

Corinthian also has for years managed to keep mollified the private accrediting bodies that must certify its educational quality.  As accreditors have felt pressure from government regulators to get tougher on predatory institutions like Corinthian, having on the board a respected educator like Robinson, who previously served as U.S. Assistant Secretary of Education for the Office of Educational Research and Improvement, might have come in handy.

Santa Ana, CA-based Corinthian now faces a major lawsuit, filed last summer, from California attorney general Kamala Harris, who has charged that the company has engaged in “false and predatory advertising, intentional misrepresentations to students, securities fraud and unlawful use of military seals in advertisements.” In January, Corinthian disclosed that it had received a request for documents and information regarding its recruiting and business practices by a group of another thirteen state attorneys general (Arkansas, Arizona, Connecticut, Idaho, Iowa, Kentucky, Missouri, Nebraska, North Carolina, Oregon, Tennessee, Washington and Pennsylvania).

Corinthian has denied all these allegations, but it has poor record of serving students. The company charges students $47,ooo a year for an associates degree in business at Everest College in Florida, while the same program at nearby Miami Dade Community College costs $6,400. Two-thirds of Corinthian’s associate degree students drop out, three-quarters of former students can’t pay down their loans, and 36 percent default within three years, the highest rate of all publicly-traded college businesses. Corinthian gets almost 90 percent of its revenue from federal taxpayer dollars. Meanwhile, its CEO, Jack Massimino, has taken home  as much as $3 million a year in compensation, awarded by the board committee on which Robinson sits.

Corinthian is now in trouble.  Although the company tried to put on a happy face in recent reporting to investors, student enrollments are down, revenue is down, the stock price has declined. The company is laying off staff and recently cancelled its annual lavish party for executives and high-achieving employees. One market research company concluded in a report to investors in February, “simply put, we believe management is running out of options.”

Another Corinthian board member is National Urban League CEO Marc Morial, whose organization, which advocates for African-American opportunity, has received at least $1 million from Corinthian. The same month that Robinson joined the Corinthian board in 2011, Morial wrote an op-ed publicly criticizing the gainful employment rule. He joined Corinthian’s board last year. The predatory practices of for-profit colleges have disproportionately harmed students of color, as well as veterans. Former Secretary of Defense Leon Panetta joined the Corinthian board at the same time as Morial but resigned eleven weeks later, citing his busy schedule, after he was criticized.

Several education organization officials told me they are dismayed by Robinson’s presence on the board of predatory Corinthian, especially given her own organization’s mission of standing up for strong professional training and quality education — and because they respect her talents and achievements.