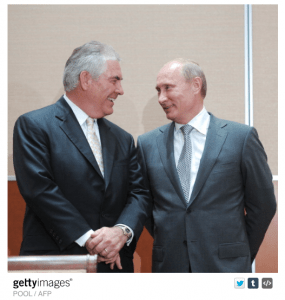 Rachel Maddow covered this subject pretty well last night in a piece titled “Oil mega-corporations key to leverage over Russia” but really scratched the surface on the pressure Exxon may be exerting on the State Department right now over sanctions against Russia.

Her interview with Former Russian Ambassador Michael McFaul, who quit the post a month ago, had this interesting quote, which tells of the cozy and deep relationship between the State Department and multinational oil companies who call themselves American companies when useful. Maddow asked about how Exxon might be lobbying the State Department at this point.  McFaul answers:

“I, I worked with ExxonMobil very closely as the U.S. ambassador to Russia, I know all their people…in fact I was just staying in the hotel in Sochi with the Presidential delegation, we just happened to be in the same hotel with Rosneft and ExxonMobil. So we, we saw them at the bar just a couple weeks ago.

Here is our briefing on the subject posted at Climate Investigations Center:

In the context of the growing conflict in the Ukraine and Crimea, this investigation and briefing looks at the long relationship between ExxonMobil and Russia. We question ExxonMobil’s allegiance to the United States amid the growing calls from the right and from the American Petroleum Institute for increasing U.S. natural gas exports as a means to pressure Russia.

We dig into the deals cut over the past few years between Exxon and Rosneft, a company 70 percent owned by the Russian government, and the U.S. assets and technology that Russia got out of the deal.

We look at President Reagan’s opposition to the first big Russian gas pipelines to Europe in 1982 and how pressure from Exxon and other multinational oil companies backed Reagan down.  Turns out Reagan was right about the dangerous dependency these pipelines would create.

The Getty Images caption to the photo at the top reads:

The title of this blog could also be “Is Exxon an American Company?” and the answer to that question comes from Lee Raymond himself.  The answer is ‘no’.

“Once, at an industry meeting in Washington, an executive present asked Raymond whether Exxon might build more refineries inside the United States, to help protect the country against potential gasoline shortages.

“Why would I want to do that?” Raymond asked, as the executive recalled it.

“Because the United States needs it…for security,” the executive replied.

“I’m not a U.S. company and I don’t make decisions based on what’s good for the U.S.”, Raymond said.”

Read Coll’s book if you haven’t.  The title is more true than ever as seen through recent events in the Ukraine.

I have been tracking Exxon for probably longer than I want to admit within the climate change struggle, including launching the Greenpeace project ExxonSecrets exactly ten years ago, which tracked tens of millions of dollars of ExxonMobil funding to climate denial front groups in the United States and elsewhere.

Coverage of the crisis in the Ukraine quickly honed in on on the central geopolitical issue – natural gas and growing recognition (or re-discovery) of the power Russia exerts over Europe via natural gas exports. Soon after the riots in Kiev and Russia’s incursion into Crimea, we began to hear a full-throated call from Big Oil and their mostly Republican sycophants in Washington DC, for the export of U.S. natural gas to Europe…as if the U.S. could suddenly neutralize Putin’s power if not for the Obama Administration obstruction inaction on LNG terminals, gas and crude oil exports, and the Keystone XL pipeline.

Back to the Exxon Rosneft 2011 deal.  In the photo at the top of this blog, both men are smiling like the won the deal.  Further exploration of the details show that Exxon is actually sharing coveted U.S. fracking technology with Russia and Rosneft got options  for U.S. fossil fuel assets including Texas fracking shale gas fields, extensive Department of Interior ExxonMobil leases in the Gulf of Mexico and sizable gas reserves in Alaska, along with Exxon oil plays in Canada.

A Rosneft press release about the initial deal says:

“Neftegaz Holding America Limited, an independent indirect subsidiary of Rosneft registered in Delaware, concluded separate agreements on the acquisition of a 30 percent equity in ExxonMobil’s share in the La Escalera Ranch project in the Delaware Basin in West Texas in the United States.

Neftegaz Holding America Limited will also be given the right to acquire a 30 percent interest in 20 blocks held by ExxonMobil in the U.S. Gulf of Mexico, one of the most oil and gas rich basins in the world. The ExxonMobil blocks are located in prospective areas of the Western part of the Gulf.

In addition, RN Cardium Oil Inc., an independent Rosneft subsidiary, acquired 30 percent of ExxonMobil’s stake in the Harmattan acreage in the Cardium formation of the Western Canada Basin in Alberta, Canada. The Cardium formation is an active unconventional oil play in which ExxonMobil has a significant acreage position. The execution of that project may become a source for the development of technologies for unconventional reservoirs in Russia.

A February 2013 ExxonMobil press release goes into more detail about the Alaska gas portion of the deal (natural gas the Governor of Alaska Sean Parnell has beenworking hard with Exxon to export to Asia):

“A separate Heads of Agreement was signed providing Rosneft (or its affiliate) an opportunity to acquire a 25 percent interest in the Point Thomson Unit, which covers development of a remote natural gas and condensate field on Alaska’s North Slope. It is estimated that Point Thomson contains approximately 25 percent of the known gas resource base in Alaska’s North Slope..”

Meanwhile, Exxon and Rosneft are getting to work in Russia as shown by a March 5, 2014 Exxon press release touting “ the largest offshore oil and gas platform in Russia…among significant projects scheduled for startup this year”