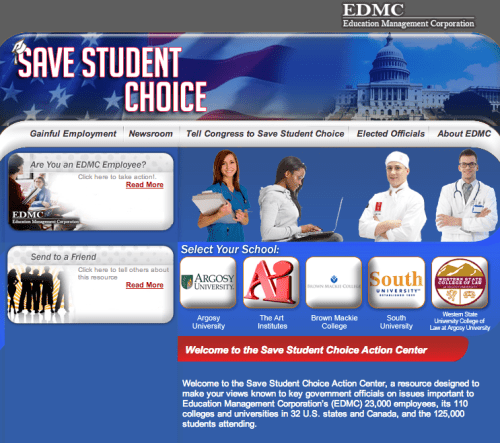 The second largest for-profit college company, Pittsburgh-based Education Management Corporation (EDMC), is facing severe challenges. The company, 41 percent owned by Goldman Sachs, held a conference call for investors last week, and the data was not good — enrollment and revenue remain down. Market analyst reaction was lukewarm at best, and the company’s stock price plunged yet again. Edward West, EDMC’s CEO, admitted in a letter to employees, “I think we would all agree the results are not where we want them to be.”

West’s letter to his workers did not mention that EDMC — whose students have for years complained about deceptive recruiting, deceptively high prices, and poor placement efforts — is now under investigation by law enforcement. Last month, a bipartisan group of twelve state attorneys general issued investigative demands on the company, seeking information, according to EDMC, on recruiting, placement, lending, and other issues. This followed the announcement in December that EDMC agreed to pay $3.3 million to settle charges with the Colorado attorney general that its Argosy University engaged in deceptive marketing practices. In yet another case, half a dozen states, along with the U.S. Justice Department, have sued EDMC for fraud, alleging the company paid its recruiters based on the number of students signed up, in violation of federal rules.

Instead of seeking a path to survival by returning to the days when EDMC emphasized helping its students train for careers, the company is instead focused on what for-profit colleges have done best in recent years: lobbying. Specifically, EDMC and other for-profit colleges are again fighting hard against the Obama Administration’s effort to implement a law that requires career colleges to actually prepare students for “gainful employment.” With the U.S. Department of Education and the White House now considering how to draft this gainful employment rule, the for-profit colleges are once again mobilizing their expensive lobbyists, lawyers, and consultants, who did a terrific job pressuring Congress to pressure the Administration to water down an earlier version of the rule, and then convinced a federal judge to strike it down entirely. For-profit colleges owners, with lobbyists for their trade association, APSCU, in tow, will be visiting Capitol Hill early next month to renew this pressure. Extensive campaign contributions from the industry to Congress make these visits even more persuasive.

Republic Report has obtained an email sent last week from EDMC management to staff urging them to become lobbyists for the cause by sending messages to the Obama Administration and Congress. The email contains a link to a colorful website that helps staff and students write and send their messages opposing the gainful employment rule, which is aimed at holding all career colleges, for-profit or otherwise, accountable for leaving students with insurmountable debt, and cutting off aid to the worst-performing programs. Many EDMC current and former students and staff have said they would like to see more, not less, accountability for schools like theirs, so there can be a greater focus on teaching, learning, and training for careers. But EDMC continues its efforts to enlist these folks to serve the interests of management.

The EDMC email strongly urges staff to go to the website and start lobbying: “It will only take a few minutes of your time, but those few minutes could make a huge impact for our students and their ability to receive the financial aid that they deserve at the college of their choice.” One EDMC employee said to me about the email, “I’m not sure it gets more pathetic than these pleas.”