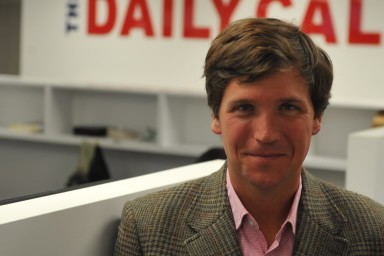 The Daily Caller, a conservative web publication, devoted much space in recent years to attacks on critics of America’s for-profit colleges, echoing claims made by for-profit college owners at a time when that controversial industry has been seeking to avoid accountability for its well-documented abuses of students and taxpayers. Yet now the Tucker Carlson-edited website has turned around and attacked a for-profit college company, breathlessly repeating the negative information in a recent Bloomberg report on Laureate Education. Why the change of heart?  Possibly because Laureate’s paid “honorary chairman” is none other than Bill Clinton. And, under Secretary Hillary Clinton, the State Department made Laureate a partner in one of its initiatives.

The Daily Caller piece on Laureate, entitled, “Why are the Clintons hawking a seedy, Soros-backed for-profit college corporation?” expresses horror at the school’s practices:

The basic business model is to buy struggling private colleges. The company then aggressively sacks professors and increases the number of paying students by massively lowering admission standards. Another core company practice is obscene expenditures — in the hundreds of millions — on advertising and (where it’s legal) hardcore telemarketing.

Indeed, the piece condemns the entire industry of which Laureate is part:

Laureate is one of 30 large American companies criticized in a scathing 2012 report by Iowa Democratic Sen. Tom Harkin on for-profit colleges. These companies absorb well over $30 billion each year from U.S. taxpayers. Most students never get a degree, though. Many drop out within a couple months.

Yet, in the years 2010-11, when the Obama Administration first sought to issue a “gainful employment” rule aimed at targeting federal money to effective career colleges, and away from schools that were consistently leaving students deep in debt, the Daily Caller persistently attacked reform advocates.

In June 2010 the Daily Caller ran a piece by DC lobbyist Lanny Davis defending the performance of for-profit colleges and criticizing Wall Street short-seller Steven Eisman, a persistent critic of the industry, for not disclosing possible financial interests in the issue. Davis soon after signed on to run the Coalition for Educational Success, a for-profit college trade group seeking to derail the gainful employment rule. Similar efforts to attack reforms by linking them to Eisman were being made by John Sperling, founder of the nation’s biggest for-profit college, the University of Phoenix; by consultants financially connected to Sperling; by another aggressive for-profit college trade group, APSCU (then called the Career College Association); and by Melanie Sloan, the head of the ethics watchdog group CREW. (Sloan at one point announced she was leaving CREW to join Lanny Davis’s firm, but later cancelled that plan.)

The Daily Caller published regular reports by its own staff reporters covering this line of attack. When CREW called on federal authorities to investigate possible manipulation of the for-profit college market by Eisman, Senator Tom Coburn (R-OK) responded by claiming that the U.S. Department of Education engaged in “very significant inappropriate behavior in tipping hedge funds on short selling private education.” He added, “Utilization of facts in the Department of Education in advantaging investors in one segment to make significant dollars over something the government’s thinking about doing is highly unethical and if proven to be the case, some people ought to be going to jail in the Department of Education.” All of this was dutifully reported by the Daily Caller, and practically nowhere else.

The Daily Caller attacked the chief Capitol Hill critic of for-profit colleges, Senator Tom Harkin (D-IA), claiming his staff might have engaged in “witness tampering” for a hearing on the industry.  The Daily Caller attacked the well-publicized Government Accountability Office investigation that exposed industry abuses. The Daily Caller questioned the ethics of the organization I ran at the time, Campus Progress (part of the Center for American Progress), because we — horrors — both engaged in public advocacy on the issue of for-profit colleges and published advocacy journalism on the same subject. The ethics expert that the publication chose to cite for this charge was Melanie Sloan.

Meanwhile, when Campus Progress spent $4000 to produce and air a television ad to counter the massive television advocacy campaign by the for-profit college industry, a “political consultant” named Natasha Mayer, writing in The Daily Caller, falsely accused us of taking money from traders like Eisman for “a million-dollar campaign on the exact same side of the issue as the wealthy short-sellers.”  Echoing the arguments of Mayer was Melanie Sloan, writing in Politico, who said of the Campus Progress ad, produced by our intern and run a handful of times at cheap rates, “major ad campaigns require major donors,” with a link there to Mayer’s Daily Caller piece.

The Daily Caller’s relentless and sometimes scurrilous attacks on critics of for-profit colleges raised questions at the time about why this publication was so obsessed with these matters — at a time when the for-profit college industry was seeking to take the focus off its own ethical and legal problems and avoid reforms that might imperil the torrent of $33 billion a year in taxpayer money into its coffers.

It’s good to see the Daily Caller now taking a hard look at for-profit colleges, many of which are indeed deceiving and abusing students, while ripping off taxpayers.  But it’s sad that the publication spent years only attacking the foes of this predatory industry, and has taken a harder look now simply because there’s an opportunity to attack the Clintons.