posted at 3:49 pm by David Halperin 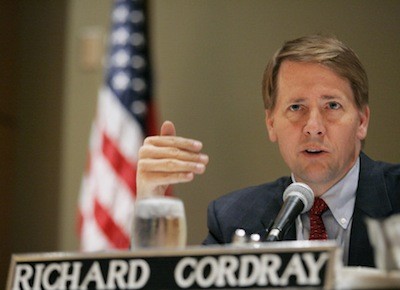 For a couple of years now, I’ve argued that Corinthian Colleges might be the worst predator of all the big for-profit college companies, a remorseless giant engaged in endless abuses of students who needed career help, not more problems. But now that Corinthian, which was taking in as much as $1.4 billion a year in taxpayer dollars, is collapsing under the weight of law enforcement probes and bad student outcomes, I worry that a prolonged focus on Corinthian’s horrid acts might allow other terrible actors in the for-profit college industry to sneak out the back door.

Indeed, the rest of the industry, and the industry’s paid friends in Congress, have thrown Corinthian Colleges under the bus, not offering a word in the company’s defense. Even though there are now dozens of federal and state law enforcement investigations probing abuses at many of the other big for-profit college companies, including EDMC, ITT, Career Education Corp., Kaplan, DeVry, Bridgepoint, and the University of Phoenix, their surrogates are now making the argument that their former pal Corinthian was a solitary bad apple, and that the rest of the fruit in the orchard must be allowed to grow unimpeded. In particular, they still insist that the Obama Administration’s gainful employment rule, which would penalize career training programs for consistently leaving students with overwhelming debt, must be gutted.

They’re dead wrong.  Without strong rules in place that give incentives to help students, these predatory for-profit colleges will continue to run amok.  As Joseph E. Stiglitz, Nobel laureate in economics, said recently: “America’s under-regulated for-profit universities excel in two dimensions: the ability to exploit young people from poor backgrounds, charging them high fees without delivering anything of value, and the ability to lobby for government money without regulation and to continue their exploitative practices.”

But while regulators must keep the pressure on all the miscreants in this troubled industry, it is important to out all the misconduct at Corinthian and, particularly, to seek debt relief for the thousands of students who were misled and mistreated by the company.

Today the Consumer Financial Protection Bureau, the agency created by now-Senator Elizabeth Warren in the wake of the horrendous deceptions that led to the last financial crisis, sued Corinthian “for its illegal predatory lending scheme.”  The CFPB’s director, Richard Cordray, made a powerful statement summarizing the charges in the case. I hope you’ll read every word:

Today we are taking a public enforcement action against Corinthian Colleges, a for-profit chain of colleges, to put an end to its illegal predatory lending scheme.  We believe Corinthian lured in consumers with lies about their job prospects upon graduation, sold high-cost loans to pay for that false hope, and then harassed students for overdue debts while they were still in school.

Corinthian is already involved in lawsuits about other similar allegations.  It is working with the U.S. Department of Education to scale back its operations, closing some campuses and trying to sell others.  Veteran Affairs agencies in multiple states have suspended the use of GI Bill benefits for new students at Corinthian schools.

The Consumer Financial Protection Bureau is seeking to protect the tens of thousands of students who have already been saddled with Corinthian’s private student loans – and the new students that Corinthian continues to bring in.

Part of the tragedy here is that most students who attend the Corinthian Company schools come from disadvantaged backgrounds, and many are the first in their families to go to college.  According to internal Corinthian documents, most students lived in households with very low income.  For these students, Corinthian too often turned the American dream of higher education into an ongoing nightmare of financial despair.

In today’s lawsuit, we allege that across the Everest, Heald, and WyoTech campuses there was a pervasive culture of employees who routinely deceived and harassed students.  We believe the schools lured in prospective students by lies and bogus advertising, which promised solid and well-paying careers upon graduation.  But the job placement rates advertised were a sham.

Our investigation of the underlying facts uncovered egregious examples of how Corinthian fudged its numbers.  One Corinthian school created fake employers.  Another paid off legitimate employers to hire its graduates on a temporary basis, just long enough to count them as employed.  And company-wide, it even went so far as to define a “career” as a job that lasted as little as one day – a convenient definition that allowed Corinthian to lie about the “successful” careers of its graduates.

The problem was broader than sham job placement rates.  It also extended to sham job placement services.  Everest, Heald, and WyoTech ads falsely promised would-be students a lifetime of extensive career services.  But students often had trouble contacting anyone in the career services office or finding any meaningful support.  What they actually got instead was generic Craigslist job postings forwarded to them – information that the students could easily find on their own.

Tuition at a Corinthian school was much higher than the federal loan limit, which left most students no choice but to take out private student loans to make up the difference.  Our complaint describes how this gap was filled by Corinthian offering students its own private “Genesis loans.”  These loans were more than twice as expensive as federal student loans.  In fact, our investigation found that three out of five students were likely to fall behind on their Genesis loan payments within three years.  Corinthian did not share these dire prospects with students.  On the contrary, it sold the loans to students knowing they had no idea they were being set up to fail

Against this backdrop, Corinthian made the unusual decision to require most of its students to begin paying back the loans while students were still in school.  Indeed, unlike federal student loans and almost all private student loans, Genesis loan payments were due immediately after starting classes.  Students who fell behind on these in-school payments, but wanted to complete their education, had to endure Corinthian’s harassing and bullying debt-collection methods at the same time.  The alternative was dropping out of college, which meant they would be left with all of the debt but with no degree to show for it

Getting students to repay these loans while they were still in school was important to Corinthian’s business model.  Our investigation found that Corinthian paid bonuses based in part on how well its staff got students to pay up.  Among their tactics, they used public and private shaming − such as pulling students from class, and informing instructors about the overdue debts.  Students were asked to meet with campus presidents to discuss why they were late on their payments.  At one Georgia campus, a financial aid staff member was called the “Grim Reaper” for removing so many students from class.

At Corinthian schools, students were put in jeopardy of losing their education if they did not repay their private loans.  Our investigation found that students were denied computer access, blocked from signing up for classes, prevented from buying books, and they even had their diplomas held hostage unless they paid up.

Today the Consumer Bureau is suing Corinthian to prevent further harm to consumers.  These schools should not be luring in new students based on illegal tactics, and they should not be collecting debts by continuing to harass students.

Despite the federal and state actions already pending against it, Corinthian is continuing to enroll students.  We are seeking help for the tens of thousands of consumers who have been victimized by Corinthian and for the new students who are currently in harm’s way.  We estimate that from July 2011 through March 2014, students took out approximately 130,000 private student loans to pay tuition and fees at Everest, Heald, or WyoTech colleges.  Some of these loans have been paid back in part or in full.  We are seeking forgiveness of the $569 million that consumers still owe on Corinthian’s outstanding loans.  And, we are seeking redress for all of the Genesis loans made since July 2011, including those that have been paid off.

Corinthian sold students on the idea that a degree from Everest, Heald, or WyoTech was worth the high cost because of the jobs it would make available to them.  But given that Corinthian had to inflate its numbers in ways that were deceptive, the education does not appear to be what it purported to be.

Earlier this year, the Consumer Bureau sued ITT Educational Services for what we believe to be predatory private student lending.  Of course, the consumer financial products and services offered by for-profit colleges and their partners are subject to the same standards as any other consumer financial product or service.  So we will continue to look closely at how they treat consumers, and any unfair, deceptive, or abusive acts and practices will not be tolerated. Thank you.