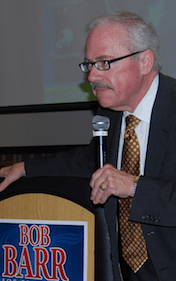 Former Representative Bob Barr (R-GA), a central figure in the Clinton impeachment inquiry, is seeking to return to Congress. But left unsaid in his official campaign biography for the open 11th district in Georgia is a private-sector career filled with work for the lobbying industry and for causes that run counter to Barr’s political persona.

On his campaign website, Barr says he is “Chairman of Liberty Guard, Inc. a non-profit and non-partisan organization dedicated to protecting individual liberty; and also heads a consulting firm, Liberty Strategies, Inc.”

Here’s what he left out:

— Compassion & Choices. Barr provided consulting services to this non-profit that is dedicated to helping patients with advance directives and living wills. During debate over the passage of health reform, Barr joined the chorus of conservative voices in denouncing government-funding of advance directives (a scheme referred to as “death panels” by Sarah Palin). But Compassion & Choices, Barr’s recent client, strongly endorses government support for advanced directives and end-of-life counseling.

— Robert Mercer. Barr has been a legal consultant to Robert Mercer, a billionaire co-CEO to Renaissance Technologies, a New York-based hedge fund. Mercer has given millions to GOP-aligned Super PACs in recent years.

Other parts of Barr’s campaign biography are disclosed, but without context. On his campaign page, Barr devotes significant space to his post-congressional career in academia. But the former congressman’s work has been in a very dubious form of education. In 2011, Barr loudly criticized proposed regulations on for-profit career colleges, an industry notorious for saddling students with high amounts of debt and deceptive promises of future employment. Barr’s newly filed financial disclosure shows that he has received some $16,000 from John Marshall Law School, a for-profit law school in Georgia. The lower tier school charges top dollar, and leaves its students with an average of over $140,000 in debt. Last year, Barr also joined the board of another for-profit college, the Interactive College of Technology.

*Updated: This post has been corrected regarding Dezenhall Resources and its lawsuit with Greenpeace.