posted at 6:35 am by David Halperin 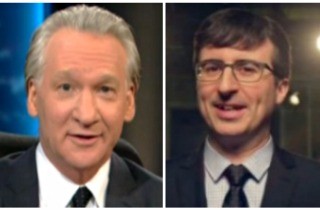 In a single week, two of America’s best comedic truth-tellers — John Oliver and Bill Maher — hit hard against the predatory for-profit colleges that rip off taxpayers and ruin students’ lives.

On his HBO show “Last Week Tonight,” Oliver attacked these profit-making colleges for their sky-high prices, meager spending on instruction, and deceptive and coercive recruiting tactics, including the enrollment of soldiers who had brain injuries and couldn’t even name the courses they’d signed up for. Oliver added, “I will say this for for-profit colleges: They’ve just given us all a first-class education in the depths of human depravity.” Oliver noted that of the 115 people enrolled in one ITT Tech engineering program in 2012, only 27 graduated, and just 13 found work in the field. “Everyone else would have genuinely been better off studying engineering at Hogwarts, because at least that way they’d have a fucking owl to show for it,” he said.

Oliver noted that the for-profit college’s shameless trade association, APSCU, had waged a successful campaign against the Obama Administration’s rule (“gainful employment”) to hold the industry accountable, in part by generating letters that the senders didn’t even bother to read and fill in the blanks — “I am a career college student at [INSTITUTION] studying [PROGRAM]. [INSTITUTION] is providing me with the education and training necessary to obtain the job I’ve always wanted as a [CAREER].”  In response, Oliver offered his own letter, which you can now send to APSCU:

To Whom It May Concern:I am [NAME HERE], a human being with [DESCRIBE AT LEAST SOME LEVEL OF SENSE] who is sick of your [SYNONYM FOR BULLSHIT].Whatever the benefits of for-profit schools, your trade group is protecting the worst actors, and [ADDITIONAL INSULTS]. [IDEAS FOR PLACES TO CRAM THIS LETTER ONCE ROLLED UP]. [PROPOSALS FOR HUMAN WASTE PRODUCTS TO BE EATEN].Thank you for your time,[NAME HERE AGAIN]

Five days later, on his HBO show, “Real Time,” live from Washington DC, Maher announced that Rep. John Kline (R-MN) was  the “winning loser” of Maher’s “Flip a District” contest, aimed at defeating a “sellout” incumbent.  Maher said the issue that Kline, the chair of the House education committee, “may be the worst on” is student debt. Kline, Maher said, “has done more to keep twenty-somethings in their parents’ basements than anyone else alive.” He called Kline “the champion of for-profit colleges, which they used to call diploma mills, but that’s back when you at least got a diploma.”  Maher charged that “at the University of Phoenix, Kline’s biggest donor, 88 percent do not graduate — that’s a worse rate than celebrity rehab.”As Jerry Seinfeld grinned and GOP politician / lobbyist Haley Barbour sat stone-faced, Maher said Kline is “bought and paid for” by the for-profit college industry — and “this is the problem with Washington.”

If you want to know more about how the for-profit college industry abuses students and corrupts Washington, boy, do I have that material for you: here and here.

Now, there are entertainers who defend and promote the for-profit college industry — from Debbie Gibson to Rob Schneider, Suze Orman to Lanny Davis. But all of them have been paid to do so.  Maher and Oliver are only interested in finding targets whose misdeeds are worthy of our outrage. There are some fine for-profit colleges out there, but the predatory companies that dominate the industry surely are worthy of public outrage — and public demand that these institutions be held accountable.