posted at 4:44 pm by David Halperin 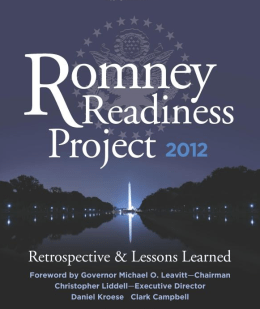 Under a federal law enacted in 2010, taxpayers now fund efforts by presidential nominees to begin their White House transition efforts even before the election, by providing federal services and facilities to the transition operation. Mitt Romney was the first recipient of this sensible reform aimed at ensuring a stronger start for a new president. Unfortunately, it appears that Romney has now turned those taxpayer resources into yet another opportunity to make money. This week we learned that the report of the Romney Readiness Project has been released. But instead of posting the document on the Internet for all of us to read, as far as I can tell, the document is only available for purchase.

The Romney readiness paper has drawn attention for its likening of the White House staff to a holding company, its plans for corporate-style management trainings, its detailed flowcharts, and its plans to roll back federal regulations. But I don’t know if anyone has asked about the book’s publisher, which according to Amazon is “R2P Inc.”

Have you heard of this publisher? According to the contract that established the Romney transition project, R2P, Inc., (presumably “Romney to President”) is a corporation that was established by Mitt Romney to accept federal money “in connection with his preparation for the assumption of official duties as president.” A good followup item would be to find out who runs and owns this company, likely a 501(c)(4) nonprofit, and who stands to earn royalties from the sale of this book. (The limited number of pages available for preview on Amazon include a warning on every page: Copyrighted Material. The copyright holder, according to the book, is R2P.)

Since taxpayers paid for this work, it should be made available to all on the Internet.  A work of government is not subject to copyright and should be shared for free. This approach — using government as a business opportunity for his friends and donors — was all too typical of Romney’s platform, and it shows how lucky we are that Romney wasn’t elected. Sadly, keeping taxpayer-funded projects (such as medicines funded with federal grants) and provisions of our laws behind expensive paywalls is in fact prevalent in our system today. We need to reform the system. Unless it turns out that all proceeds of the book will be returned to taxpayers, and unless R2P Inc. promptly posts the entire text on the Internet, we should start by not buying this book.

UPDATE 8:15 PM: Soon after publishing, I wrote seeking comment to the email address on the back of the book cover. At 7:40 pm I received an email response from Daniel Kroese, who, according to LinkedIn, is Special Assistant to the Executive Director of the Romney Readiness Project. He wrote:

David, we wish you had contacted us before you posted, as your article is filled with inaccuracies and the the title is not only misleading but flat out untrue. Some key points:

1) Romney isn’t selling anything. Mitt Romney was not involved with the process of producing this report.

2) R2P Inc. is a non profit organization which has never received ANY government funding. To say the transition report is funded by taxpayers is categorically untrue. In fact, since Romney lost the election there was never any transfer of funds from the US government to the Romney transition operation in any capacity. The $6.6 million appropriation was only set to be transferred AFTER a victorious election.

3) Royalties (which will be very minimal) will be donated to charity.

4) The book makes publicly available information that in the passed has stayed within the closely guarded walls of each party. It was felt that the Pre-Election Presidential Transition Act of 2010 (unanimously passed Senate) reinforced the belief that pre-election transition planning is a responsible way to safeguard our national security and promote continuity of government. As the first transition effort to operate under these guidelines it was felt that an appropriate measure of bipartisanship would be to make the lessons learned from this effort publicly available as opposed to only sharing with Republican leadership.

I hope you can amend your article accordingly to reflect these facts.

Thanks so much for the prompt response. I have carefully read it, and I do not believe there were any inaccuracies in my piece.

Shortly after posting the article and writing to you, I updated it to clarify — to state explicitly — what I understood to be the case under the statute and the contract — R2P received federal services and facilities (office space, phone service, etc.) from the federal government. Unless R2P did not ultimately accept such services and facilities, then it did receive taxpayer support. Please let me know if, in fact, R2P ended up declining all such services. (Nowhere in my original version did I state that the federal support R2P received was in the form of cash, but my prompt revision was intended to make that explicit.)

I also clarified in my updating of the post, based on reading the statute, that R2P was likely a 501(c)(4).

The contract also states that “Governor Romney established R2P,” indicating to me that he is connected to that entity, which Amazon lists as the publisher of the book. Please do let me know Governor Romney’s past and current role in R2P, so I can make any necessary clarification.

I think it is admirable that the organization wanted to share the report, but I strongly urge you to share it more broadly by posting it on the Internet.

David the biggest inaccuracy would be the title as there is zero connection between the taxpayers and the funds used to produce this report (which were modest). Yes, the GSA did provide office space and tech support (which we did accept) but this taxpayer support facilitated the transition effort itself NOT the subsequent production of this report. I think this distinction is significant. There simply were no discretionary funds that were ever given to the Romney transition effort. As I said earlier, this would have occurred post election. To link taxpayer funds to the production of this report is simply not true.

And I responded again:

Daniel, Thanks. I very much want to be accurate. GSA provided office space and tech support from the date of the contract through or close to election day, right? I presume the transition documents were developed in that period and not, as you suggest, “subsequent.” I certainly hope it is not the case that the material in the book was prepared from scratch after election day, because what would have been the point of that? If some work to complete the material in the book was done after election day, I’ve got to believe some was done before, in which case it was done by an entity that took advantage of taxpayer-funded services.

By the way, I appreciate that the royalties will go to charity. Can you tell me which charities? But I think it would still be appropriate to share with the taxpayers for free the fruits of a project that they helped fund, rather than selling it.

I will post this whole exchange as an update to the article.

UPDATE 2: Actually we do have a sense of what taxpayers shelled out to support Romney’s pre-election transition project — $8.9 million.