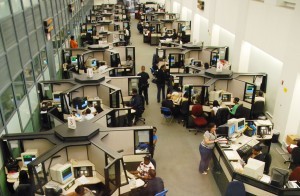 The for-profit college industry is under pressure. Many of its biggest companies are being investigated by federal agencies and state attorneys general for fraud and misrepresentation — deceiving students, regulators, and investors about job placement rates, costs and quality of programs, transferability of credits, and other matters. Enrollments are down, and share prices have been falling. Now, things are about to get even tougher for these companies — but, thankfully, a little easier for people tired of being relentlessly pursued by for-profit college recruiters who are desperate to put “asses in classes” and keep the billions in federal student aid money flowing into their bosses’ coffers.

On Wednesday, new Federal Communications Commission (FCC) rules are set to kick in under the Telecommunications Consumer Protection Act, and they will put tighter restrictions on the ways in which for-profit colleges and their lead generator partners can make recruiting calls to past, current, and prospective students. In most cases (whenever calling from a phone that has the “capacity” to autodial), recruiters won’t be able to make such calls without prior express written consent. This can include an electronic signature online, but where an online visitor is asked to check a box before proceeding, many of them simply close the browser window without sharing information.

The rules, in fact, apply to sales calls by all for-profit businesses, but for-profit colleges, many of which have relied on boiler room operators hounding people with carefully-crafted, manipulative scripts, may be hit especially hard. Indeed, the always-connected, pro-industry Wells Fargo analyst Trace Urdan warns that the new rules “are likely to impact lead flow to post-secondary schools from third-party aggregators by at least 12%, and in some cases, by as much as 50% according to our sources privy to pre-implementation testing. This seems to contrast with assertions by school companies that the effect will be either negligible or in the single-digit percentage range.” Accordingly, Urdan warns that expectations for for-profit college “starts,” meaning student enrollments, “could be at risk” this fall and next year.  He believes that online training programs, including those at the University of Phoenix, Corinthian Colleges, and Bridgepoint Education, are in greatest peril.

For-profit colleges that violate the rules risk statutory damages in court of $500 for accidental violations and $1500 for intentional violations — per call. With autodialers working all day, damages in a class action lawsuit could add up fast.  The larger, wealthier companies can hire an audit firm to help protect them from unwarranted accusations, but, at the same time, as Urdan notes, the bigger the school, the more dependent it is on the third-party lead generators that will be especially constrained by this rule.

Last year, senators Dick Durbin (D-IL), Tom Harkin (D-IA), Barbara Boxer (D-CA), and Frank Lautenberg (D-NJ, now deceased) wrote to the Federal Trade Commission (FTC), asking it to investigating these lead generators. “Lead generators have become a key part of the aggressive recruiting strategy for many for-profit colleges,” they wrote, arguing that for-profit colleges work with lead generators to “deceive consumers to obtain personal information by misrepresenting their affiliation with for-profit colleges, as well as concealing how and by whom their information will be used.” Indeed, my own encounters with the world of lead generation, and those of others, suggest it is a scary place indeed.

In June, at the annual meeting of the for-profit colleges’ trade group, APSCU, lawyers briefed college executives on how to comply with the new rule, and the group  put out an “APSCU FCC Regulations Readiness Guide.”  An official from the Federal Trade Commission (FTC) also spoke, warning schools that they cannot duck responsibility by blaming “rogue vendors,” and warning that the FTC will be reviewing student complaints that are submitted to the Department of Education and the Department of Veterans Affairs.

For unscruplous for-profit colleges, at least. But good news for students who might otherwise be pressured into signing up for career programs that leave them tens of thousands of dollars deep in debt with no improvement in career prospects.