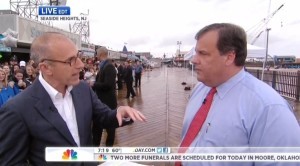 New Jersey Governor Chris Christie received widespread praise for his determined, and anti-partisan, work to aid his citizens in the aftermath of superstorm Sandy. But when it comes to protecting his state against future extreme weather assaults, Christie morphs into another know-nothing partisan. In an interview last week on NBC’s Today, Matt Lauer pressed Christie on his recent statements casting doubt on the connection between human-created climate change and Sandy:

LAUER: You said you don’t think there’s been any proof thus far that Sandy was caused by climate change. Several experts I’ve heard from say the destruction, though, from Sandy, was probably more severe because of elements of climate change, including rising sea levels. Are you not willing to say that’s from-

CHRISTIE:  No ….this is their business, they study it, and they say, “probably,” “maybe.” All I said was, I haven’t been shown any definitive proof yet that that’s what caused it. And this is just – listen, this is distraction. I’ve got a place to rebuild here and people want to talk to me about esoteric theories. We’ve got plenty of time to do that later on….

In fact, there is an overwhelming scientific consensus that human activity — the burning of fossil fuels — is rapidly causing climate change, and that climate change leads to extreme weather events. It doesn’t matter whether there is conclusive proof that climate change caused Sandy. What matters is what can we do now to reduce the chances that there will be more frequent and even more destructive Sandys destroying the lives of our children and their children.

Contrary to Christie’s glib assertion that we have “plenty of time” to address climate change “later on,” the task is urgent: The last twelve years all rank in the t0p thirteen warmest years ever recorded, and earlier this month scientists reported that “the level of the most important heat-trapping gas in the atmosphere, carbon dioxide, has passed a long-feared milestone … reaching a concentration not seen on the earth for millions of years.”

Christie himself had previously admitted that climate change was a legitimate problem. Perhaps now he is more concerned about competing for the 2016 GOP presidential nomination and oil and gas campaign contributions against climate-denying competitors like Marco Rubio.

In any case, his record speaks louder than his words; as governor, Christie has repeatedly undermined policies aimed at addressing climate change, withdrawing New Jersey from a Northeast states plan to reduce carbon emissions, shutting the Office of Climate Change and Energy within the state Department of Environmental Protection, weakening New Jersey’s renewable energy regulations, and cutting $210 million from his state’s clean energy fund.

Christie deserves praise for helping New Jerseyans rebuild from the devastation of Sandy. But his leadership can’t stop there: Real leaders must act boldly to address long-term problems, not to sweep them under the rug.

Visit NBCNews.com for breaking news, world news, and news about the economy

This piece also appears on Huffington Post and Grist.