Whatever Happened To ALEC’s PR Campaign? 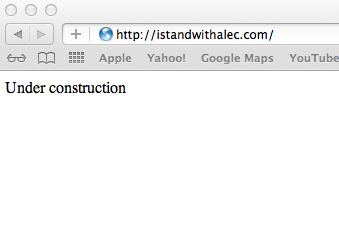 Ten days ago, the embattled American Legislative Exchange Council, the corporate front group better known as ALEC, launched a campaign to improve its public image in the wake of public outcry about its roll in drafting Stand Your Ground laws. The plan was to get conservative bloggers writing nice things about ALEC, an uptick of positive Tweets and Pinterest pins supporting the organization, and the launch of a new website, IStandWithALEC.com.

So far, the public hasn’t been convinced. Mostly because none of this has happened. A sample of Tweets labeled #ALEC are still overwhelmingly negative. Meanwhile, a Pinterest search for ALEC mostly reveals photos of actor Alec Baldwin. The website IStandWithALEC.com says “Under Construction.”

We called ALEC’s public relations department to ask about the state of the PR campaign. They didn’t respond.