On Independence Day, Remember That The Founding Fathers Revolted Against Big Money 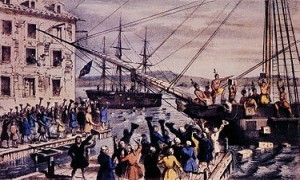 Tomorrow is Independence Day, the holiday where Americans celebrate declaring independence from the British Empire. And the joy of hot dogs and fireworks.

But Independence Day shouldn’t just be a day where we’re all glad we drive on the right side of the road and perplexingly still don’t use the metric system. It’s also a holiday where we should reflect on the roots of the American idea that the Founding Fathers fought for.

For example, everyone knows that the Founders revolted against their British rulers to make America an independent country, and that one of the starting points for this revolution was the Boston Tea Party.

But what was the Boston Tea Party actually about? As author Thom Hartmann notes in his book Unequal Protection, it was primarily a revolt against unfair trade and tax policies the Empire had bestowed upon the British East India Trading Company. The East India Company had strong links to Parliament, which kept lawmakers in its pockets:

Trade-dominance by the East India Company aroused the greatest passions of America’s Founders – every schoolboy knows how they dumped the Company’s tea into Boston harbour. At the time in Britain virtually all members of parliament were stockholders, a tenth had made their fortunes through the Company, and the Company funded parliamentary elections generously.

After the Revolution, the newly-formed American nation was not keen to return to the days where a powerful corporation like the East India Company could use its wealth to buy politicians and sway public policy. In “the early days of the nation, most states had rules on the books making any political contribution by a corporation a criminal offence.”

Corporations themselves were not the massive legally-protected entities they are today. Most existed along limited charters that would give them a lifespan of 20 or 30 years at most. But slowly the courts gave corporations more and more rights, which gave them more political access and power.

As the courts in the United States ultimately gave corporations personhood and “free speech” rights, the vision of these early Americans began to fade away. The nineteenth century’s most famed president, Abraham Lincoln, saw the power of corporations rising before his eyes, and compared rising corporate power’s threat to that of the Confederate States of America:

The money powers prey upon the nation in times of peace and conspire against it in times of adversity. It is more despotic than a monarchy, more insolent than autocracy, and more selfish than bureaucracy. It denounces as public enemies, all who question its methods or throw light upon its crimes. I have two great enemies, the Southern Army in front of me and the Bankers in the rear. Of the two, the one at my rear is my greatest foe.. corporations have been enthroned and an era of corruption in high places will follow, and the money powers of the country will endeavor to prolong its reign by working upon the prejudices of the people until the wealth is aggregated in the hands of a few, and the Republic is destroyed.

Enjoy your Independence Day, and while you’re taking in the hot dogs and fireworks, remind yourself of how far America has drifted from what was in many ways a much more pristine vision of democracy.