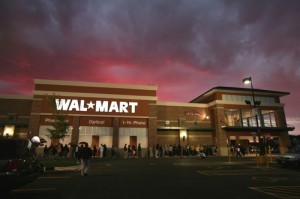 The details of Wal-Mart’s complicity in bribery are shocking, but there is one important element that the Times did not report.

While Wal-Mart’s largest subsidiary spent millions of dollars systematically bribing Mexican officials, the company back home has been working, through big business groups like the U.S. Chamber of Commerce, to weaken the Foreign Corrupt Practices Act (FCPA), which renders it illegal for corporations to bribe officials in foreign countries.

The Chamber of Commerce made a major push in late 2010 to severely curtail the power of the FCPA. One of the revisions the business lobby wanted was to limit a parent company’s civil liability for the acts of a subsidiary. This lobbying also came shortly after it was revealed that the Chamber had been getting foreign funding from overseas corporations.

In addition to being a member of the U.S. Chamber of Commerce, Wal-Mart is also represented by the Retail Industry Leaders Association (RILA). RILA has taken aim at the FCPA as well. The RILA and Chamber both held a “roundtable discussion” on parts of the FCPA that they’d like to see weakened just two weeks ago.

To recap, this episode is an important anecdote about how corruption in America works today. First, a powerful corporation realizes that bribery is a part of its business model in some part of the world. Then, it tries to cover up aforementioned bribery. In case that doesn’t work, the corporation spends big back home to weaken laws against bribery. Finally, if all of that doesn’t work, and intrepid reporters at a place like the New York Times discover the wrongdoing, the corporation’s tactic is to deny that it had any ill intent at all.

“If these allegations are true, it is not a reflection of who we are or what we stand for,” spokesman David Tovar told the press. “We are deeply concerned by these allegations and are working aggressively to determine what happened.”

Given how aggressively Wal-Mart targeted the one law that would hold them accountable, one has to wonder if they’re more concerned by what they did or by the possible chance that they will actually be punished for it.