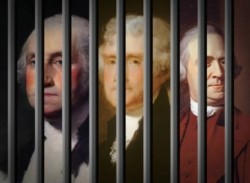 To many in the South, Waffle House is a family-friendly restaurant that serves up some of the best grits and hashbrowns around. But behind that iconic sunny yellow sign is a corporate agenda aimed at stripping Americans of their rights.

State Senator Don Balfour of Snellville, Georgia — a Waffle House vice president who serves on the board of the Georgia Chamber of Commerce — is pushing a bill in his state’s legislature that would effectively outlaw picketing outside of private homes. Although the bill is aimed at suppressing union protests at the “private residences” of business executives, its scope is actually much further reaching.

The bill is written to make it illegal for picketers to take part in actions that would be “interfering with the resident’s right to quiet enjoyment.” But historically, one group of activists took part in protests aimed at private residences intended exactly to disrupt the peace to make their point: the Founding Fathers.

Prior to the Revolutionary War, Sam Adams and other Founding Fathers formed a group called the Sons of Liberty to protest the Stamp Act and similar oppressive legislation. The Sons of Liberty regularly protested outside of the homes of British colonial officials, including the homes of tax collectors. If Balfour and Georgia’s Big Business titans have their way, these protests would be illegal, and Adams and many of the other Founding Fathers would’ve been arrested.

Think about that next time you dig into those delicious Waffle House waffles.