Earlier this month, health insurance company Aetna accidentally leaked a document that revealed that the company secretly funneled $7.7 million to Republican front groups in 2010. The money was earmarked for the Karl Rove’s American Action Forum ($3.3 million) and the U.S. Chamber of Commerce ($4.4 million), two groups that led the charge in fighting against health reform and running deceptive advertising about supporters of the law. One particularly nasty American Action Network ad said congressmen who voted for the bill were providing viagra for rapists.

But Holtz-Eakin is apparently nervous about answering questions about the health insurance money that helps fund his network of front groups.

The American Action Network, which is organized as a 501(c)4 educational foundation, spent well over 50% of its budget on attack ads in 2010, much of it funded by Aetna. The organization is now facing calls for an IRS inquiry given that the group’s advocacy spending may qualify as a violation of its “primary purpose” as an educational non-profit. 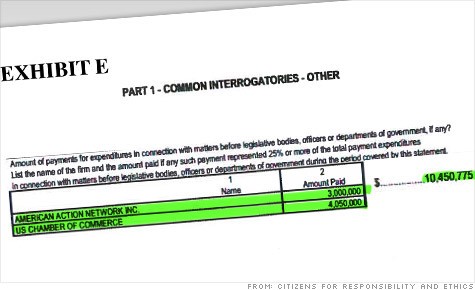