posted at 3:29 pm by Suzanne Merkelson 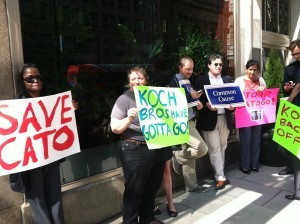 Today, United Republic and Republic Report were joined by a passionate group of activists outside Koch Industries’ downtown Washington lobbying headquarters to criticize the petrochemical billionaire Koch brothers’ attempt to take over the Cato Institute.

Cato has a long history of fierce libertarian beliefs, widening the debate in Washington on everything from civil liberties to the drug war to the economy. But Charles and David Koch have recently sought to, in the words of Cato president Ed Crane, “transform Cato from an independent, nonpartisan research organization into a political entity that might better support [Charles Koch’s] partisan agenda.”

Most protesters cited their concerns over corporate control of Washington as a primary reason for attending. “Washington, D.C.’s think tanks are increasingly becoming ‘do tanks’ — meaning they are becoming advocates on behalf of their corporate and political donors rather than avenues for independent analysis and research,” said protest organizer and my Republic Report colleague Zaid Jilani. “Whether or not you agree with Cato’s views, people should be concerned about big money buying organizations and dominating public debate.”

Charles Koch, worth $22 billion dollars, is attempting to a hostile takeover of the Cato Institute by appointing a small army of Koch Industries lobbyists to the Cato board, while also filing a lawsuit to seize control of the Institute’s shares. That’s why we protested at the Koch Industries lobbying office. As we’ve reported, Koch has an agenda that is anything but libertarian: the petrochemical-political empire has supported anti-gay, pro-war, and crony capitalist politicians, and the company takes advantage of special government carve-outs, everything from military contracts to eminent domain.