Just two hours ago, the House of Representatives passed the Stock Act, a measure to curb insider trading by lawmakers and some federal officials. The bill Congress voted on today, however, is different than the legislation that passed out of the Senate last week.

Last week, Senator Chuck Grassley (R-IA) attached a strong transparency amendment to the Stock Act that requires political intelligence firms to register as lobbying firms. The political intelligence industry consists of lobbyists and other K Street consultants who mine Congress for inside information to then sell to Wall Street speculators. Grassley’s modest amendment simply required these firms to register as any other lobbying interest — but Wall Street prefers secrecy. As the New York Times reported, the big banks and hedge funds mobilized quickly over the last few days to strip this provision. And, it turns out that House Majority Leader Rep. Eric Cantor (R-VA), who managed the Stock Act’s vote today, actually removed Grassley’s amendment only 24 hours before the vote. See a screen shot of the deletion below: 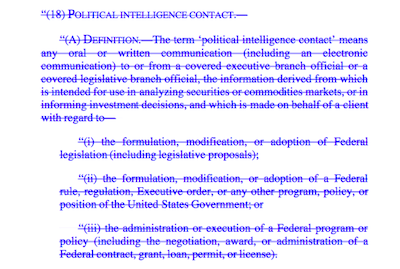 The Sunlight Foundation has more.