Steven Law Lobbied For The Stimulus, Now His Crossroads GPS Attacks Anyone Who Supported It 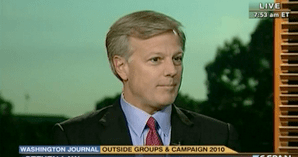 The ad suggests the stimulus was spent carelessly; the narrator claims the money was “wasted money studying ants in Africa.” Just three years ago, the shoe was on the other foot.

The President and CEO of Crossroads GPS, Steven Law, oversaw a lobbying team to help pass Obama’s stimulus. In fact, Law’s organization applauded the legislation and urged lawmakers to vote for the bill to “provide stimulus and get Americans back to work.”

Law, who partnered in 2010 with Karl Rove and several former Republican National Committee members to found the American Crossroads network of corporate front groups, previously worked as the General Counsel of the U.S. Chamber of Commerce. There, Law represented multinational companies like Dow Chemical, Chevron, and AIG, in influencing Congress. The Chamber is frequently cited as one of the biggest spending lobbying associations in the capital.

Law’s current attack on the stimulus doesn’t even make much sense. The ant research project mentioned in the ad was actually an effort to study the long-term effects of climate change on eco-systems.

Far from being a policy or education foundation, as Crossroads GPS is incorporated, Law’s actions seem more in line with a K Street politico for hire.