One of the biggest Super PACs this election cycle, American Crossroads (along with its sister group, Crossroads GPS), is airing ads across the country assailing Democrats for “bailing out the same banks that caused the financial meltdown.” The group has launched bank-bailout themed ads against Elizabeth Warren, who in fact has been harshly critical of aspects of the bailout and played no role crafting the bailout legislation. The ads also target President Obama, criticizing him for bailouts that have increased the national debt. Crossroads spent $25 million on the ad against Obama, which is currently running in several states. As several fact-checking organizations have noted, the ad unfairly singles out Obama for the entirety of the blame for the cost of the bailout.

One problem with the bailout accusation? The president and chief executive officer of American Crossroads is Steven Law, a political operative who led a bank lobbying team in favor of the bailouts in 2008. Before he joined the Karl Rove in founding the Crossroads family of attack ad groups, Law was the general counsel for the U.S. Chamber of Commerce’s lobbying team.

As the markets tumbled in 2008, the Chamber led efforts to use taxpayer money to bailout some of its largest members, including AIG, J.P. Morgan Chase, CitiGroup, Bank of America. The measure, commonly referred to as the Troubled Assets Relief Program, passed in large part due to the Chamber’s aggressive lobbying.

On the disclosure form that shows the Chamber’s efforts to pass TARP — H.R. 3997/H.R. 1424, the “Emergency Economic Stabilization Act of 2008” — Law’s name is prominently displayed. The Chamber spent over $24 million lobbying during the last three months of 2008: 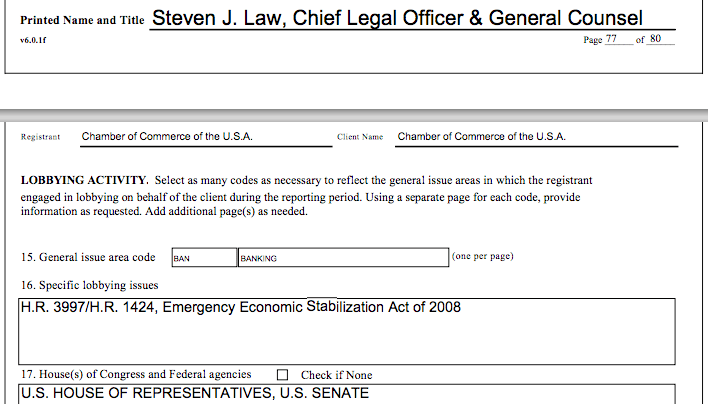 After the bailouts were distributed, Law and his team successfully lobbied to kill a bill to curb TARP bailout recipients from receiving lavish bonuses. In other words, not only did Law help shovel taxpayer money to big banks, he made sure they could use that money for exorbitant bonuses.