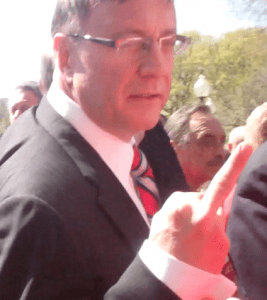 Last year, Steve Lebowitz and I published a story for ThinkProgress revealing that Steve Lonegan, a Republican candidate for New Jersey governor in 2009, made false statements in order to obtain millions in public funding for his election. Our report sparked a qui tam lawsuit by a citizen in New Jersey against Lonegan for defrauding the taxpayers of his state. Lonegan, however, doesn’t seem interested in talking about the matter. In fact, he gave us a rude gesture when confronted about the issue.

Here’s the backstory. Lonegan badly needed resources to compete with Chris Christie in the GOP primary in 2009. He sought public financing under the state’s clean elections law, and swore under oath to the New Jersey Election Law Enforcement Commission (ELEC) that he had not participated in any type of advocacy organization for four years prior to becoming a candidate. He won the public funds — $2.7 million — but lost the election.

Lebowitz and I revealed later, using campaign finance data and public tax disclosures, that Lonegan had participated in several advocacy organizations, despite his statements to New Jersey officials. We produced documentation that showed that Lonegan received $132,500 from Americans for Prosperity, the group financed by billionaires David and Charles Koch, months before applying for public financing. Of the funds paid to Lonegan, $24,500 came from Americans for Prosperity’s express advocacy division, meaning the money was for lobbying on public policy. Moreover, Lonegan also raised $455,000 in 2007 for a group he founded, call the “Americans for Prosperity New Jersey Political Committee.” The evidence strongly suggested that Lonegan had deceived the ELEC to finance his own campaign. (Ironically, Lonegan had at one point opposed the very idea of clean election laws, which his organization dubbed “welfare” for politicians).

William Brennan, a New Jersey resident, filed a lawsuit late last year against Lonegan for obtaining the millions in taxpayer election support using a false claim. Donald Burke, Brennan’s attorney working on the qui tam case against Lonegan, told Republic Report that the lawsuit has been served to Lonegan, and they are now in the discovery process.

Republic Report ran into Lonegan on Tuesday at a health care rally hosted by Americans for Prosperity on Capitol Hill. Rather than chat about the lawsuit, Lonegan flipped us the bird. Watch here: