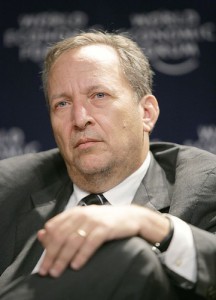 Prior to joining the Obama administration as the director of the White House National Economic Council, Larry Summers faced a barrage of criticism after it was exposed that he received hundreds of thousands of dollars from major banks for a series of speeches he gave in in 2008. Despite this conflict of interest, the administration expressed full confidence in Summers’ role as a chief economic adviser to President Obama, telling the public that he was primarily interested in crafting economic policies that help “families across America.”

Summers has since left the administration, and is once again on the corporate speaking circuit. Last June, he appeared at the 2011 World BPO/ITO (Business Process Outsourcing/Information Technology Outsourcing) Forum, which took place in Jersey City, New Jersey.  The Forum featured participation, attendance, and/or lectures from executives from many of the world’s top corporations — including AT&T, Pfizer, Coca Cola, Home Depot, and Morgan Stanley — in a number of meetings and presentations about outsourcing labor services.

Summers lectured as the closing keynote speaker for the event, and was introduced by Surya Kant, the North American president of Tata Consultancy Services (which is listed on the event’s website as a sponsor of his speech), a Mumbai-based company that specializes in outsourcing. According to excerpts of his remarks released by event organizers, the former chief economic adviser actually championed outsourcing:

For executives planning their strategies in light of the “new  normal” economy, renowned economist Larry Summers has some important advice: “There are those  today who would resist the process of international integration; that is a prescription for a more contentious and less prosperous world…We should not oppose offshoring or outsourcing.”

With the unemployment rate at 9.4 percent, Summers compared critics of the outsourcing of American jobs to “luddites who took axes to machinery early in England’s industrial revolution.” Unfortunately, the full of text of Summers’ remarks is mysteriously missing from the website — particularly odd given the fact that most of the other keynotes are posted online.

The Republic Report asked conference organizer Kartik Kilachand if we could see the full text of Summers’ remarks and if he was paid an honorarium or speaking fee for his appearance at the event. Kilachand replied that this was “confidential information” because the conference had signed a Non-Disclosure Agreement with Summers. The Republic Report also e-mailed Summers and his assistant at Harvard, Julie Shample, asking for disclosure. “I wouldn’t have any information about this, you may want to check with the forum,” replied Shample.

While Summers’ full presentation is being kept confidential, the remarks of several corporate executives have been posted online. BP CIO Dana S. Deasy presented the opening keynote speech for the event, and bragged about the fact that his company outsourced most of its IT services (largely to three Indian firms and IBM, which handed off much of the work to Indian workers) within 20 months:

DEASY: [After talking about outsourcing all of his company’s IT services in under two years.] And as you can see, that’s exactly what we did in 2009 and 2010. 65 percent of my entire op-ex budget is managed by some sort of a managed service, offshore, outsourced relationship. We accomplished that in just under 20 months. And in doing that we took out 800 million dollars out of the IT budget in two years.

During another session, Amit Mukherjee, the president of Ishan Advisors LLC and an executive advisor at Babson College, asked attendees a pointed question, “How many people in this room agree with the statement that a free market in global sourcing is good for America?” As the audience’s hands shot up, he replied, “Okay, so almost everybody agrees with that statement. Fair enough.”

Summers’ appearance at the World BPO/ITO Forum also seems to contradict the Obama administration’s claims that it is battling outsourcing. At a recent “insourcing” event held at the White House, President Obama said that he wanted  the United States “to be known for making and selling products all over the world stamped with three proud words:  ‘Made in America.'”

In recent weeks, there have been rumors that Summers will be nominated to head the World Bank — despite having signed off on a memorandum during his first tenure there that praised the advantages of dumping pollution in developing nations — by President Obama. One has to wonder if the administration is at all troubled by Summers’ continued advocacy on behalf of big corporations as it mulls once again installing him in a position of great influence.