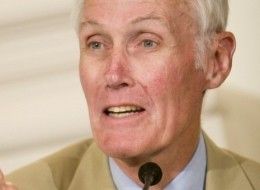 Recently, former Senator Slade Gorton (R-WA) sat down to talk about issues of the day with other politicians from Washington State. Asked by an audience member about the role of lobbyists, Gorton reminded the crowd that he is a lobbyist, and went on to complain that lobbyists are too “over-regulated.” He argued that disclosure requirements and the rule, passed in 2007, barring lobbyists from treating lawmakers to meals and other gifts, showed that lobbyists are too burdened with restrictions:

Q: From your time in the Senate, would you comment on the role of the lobbyist and do you think there should be tighter parameters on around that role?

GORTON: Well, I’ve got to start by saying, I am a lobbyist. I am registered as such. One of the parts of the First Amendment, you know, guarantees the right to petition Congress for redress of grievances. We all, we have to register and say who we’re representing. We can’t even take a member of Congress to lunch or a cup of coffee anymore. I think personally lobbyists are greatly over-regulated at the present time and for that matter members of Congress have over-regulated themselves in many personal relationships.

Gorton retired from Congress in 2001, and went directly to K Street to work as a lobbyist. He currently represents trade group for businesses in Guam, several energy interests, as well as the New Venture Fund, Clark Street Associates, and Galactic Ventures.

Gorton’s claim that lobbyists face too many onerous rules flies in the face of experts who say lobbyists have never had as much influence as they do today. A brand new series from the newspaper Roll Call details the many ways in which lobbyists legally avoid disclosure, use Super PACs as “weapons” for influence, and skirt the various gift and traveling bans enacted several years ago.