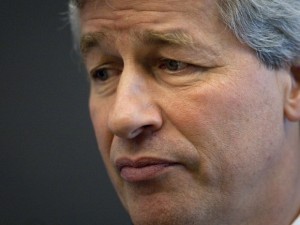 Imagine if, when suspects were taken before a court to testify, they were able to pay off the judge and jury to make sure there was no serious grilling. Unfortunately, this isn’t a hypothetical. This is the U.S. Senate.

While Americans put their faith in Congress to hold the Big Banks accountable, a large portion of the senators on the committee this morning pitched nothing but softball questions to Dimon. Here’s a selection of some of the questions and discussion that we transcribed:

Senator Schumer (D-NY): [Downplaying the $2 billion loss] The shareholders lost, the customers and taxpayers didn’t [ignoring that JP Morgan was bailed out and is FDIC-insured]…it was institutions smaller than JP Morgan that started the catapult, firms like Lehman Brothers. — the catapult, firms like Lehman Brothers. Were we just lucky? What is your assessment about the danger of this type of thing happening in other institutions that are not as well-capitalized as JP Morgan?

Senator Crapo (R-ID): What should the function of the regulators be?

Senator Corker (R-TN): Mr. Dimon you mentioned the biggest risk banks take is making loans…what would happen in an institution like yours if you had $700 billion in loans, what would happen if you didn’t have the ability to hedge that risk in a way that makes sense? [implying that overregulation may be a problem] So I think you’ve made it clear…there’s really no way for a regulator to catch this kind of [thing], wouldn’t you agree? […] A banker’s always gonna be ahead of a regulator, anyway….A lot of people think, one of your peers at one of the large large institutions was in here saying that Dodd-Frank really missed the mark. [Dimon nods in agreement.]

If anything, the senators probing Dimon seemed to be more concerned about his opinion on financial regulations than seriously demanding from him why his company continues to engage in risky behavior.

Why did the senators go so easy on Dimon? Follow the money:

Here are the top lifetime contributors to Schumer. JP Morgan is fourth: 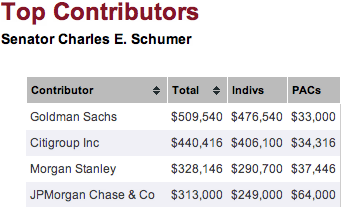 Interestingly, the one senator who went toughest on Dimon today — Sen. Bob Menendez (D-NJ) — didn’t receive a cent from the Political Action Committee of Dimon’s bank this election cycle.