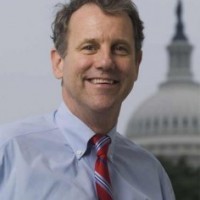 In a piece about populism and the Democratic Party in Politico, Democratic Senator Sherrod Brown (OH) explained how Big Business has, through its ability to tap into an extraordinary amount of campaign contributions, independent expenditures, and other electoral interventions, been able to own Congress:

“They own the Republican Party, and they have too much influence in my party, I mean there’s no question about that,” said Sen. Sherrod Brown (D-Ohio), a true-blue populist up for reelection who has had $8.3 million spent against him already by third-party groups, most of them allies of business . “That’s why wealth is so concentrated at the top. And that’s all enforced now by this outside spending. Every member around here has had to have thought at times that, ‘If I vote this way the wrath of God is coming down on me.’”

As we covered earlier this year, Brown has been one of the Senate’s most outspoken fighters against policies pushed by Corporate America. As a result, he’s one of Big Money’s top targets this year.