Senator Mitch McConnell Agrees That “Corporations Are People, Too” 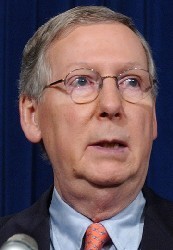 Senator Mitch McConnell (R-KY), the Republican leader in the Senate, is one of the most dedicated opponents of campaign finance reform. Going beyond many of his colleagues on the right, McConnell opposes even the disclosure of many types of campaign spending and funding. McConnell spent much of his day Friday giving speeches on Fox News and at conservative organizations decrying the attempt by reformers to help clean up our broken campaign system. He took aim at President Obama, proponents of the DISCLOSE Act, and “bloggers” for calling attention to wealthy financiers of Republican front groups.

During his stop at the American Enterprise Institute, an audience member asked the senator how to convince Americans, who, the questioner felt, are too lazy or stupid to understand politics, that “corporations are people, too.” McConnell, in apparent agreement with the proposition, said that Americans simply do not spend enough time comprehending these issues:

Q: How do you convince the average voter who knows nothing about economics or public policy that corporations are people, too, and their voices shouldnt be silenced.

MCCONNELL: Well, I’d be the first to admit that this is not an issue that is on the minds of most voters. But it ought to be on the minds of folks like you all who are really interested in the details of it. […] For most Americans, politics is a marginal thing in their lives, they’re not spending as much time thinking about this.

Corporations, of course, are not human beings. Even Senator John McCain (R-AZ) has taken issue with such an absurd suggestion.

And while McConnell spent 45 minutes during his speech comparing attempts to ensure campaign disclosure to “censorship” and “intimidation,” McConnell himself once supported disclosure across the board, even for thinly veiled “issue groups” that run ads. His conversion to the side of dark money comes at a time when secret corporate money is bolstering the likelihood that his party retakes the Senate.